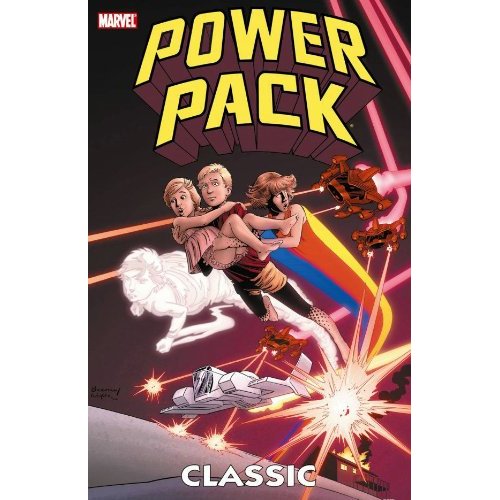 OK, officially it was the X-Men and my favorite character was Wolverine because I knew Power Pack was a kid’s comic and wasn’t cool, even though I was 11, a year younger than the oldest of the characters in the comic, Alex..

While most comics were 22 story pages and 75 cents, the first issue of Power Pack was a “King-Sized Collector’s item” 32 pages and a buck, my complete allowance for the week. I remember it being a lot bigger. In fact, reading it again for the first time in years, I still had to check because Louise Simonson packed (no pun intended) so much story in those 32 pages. 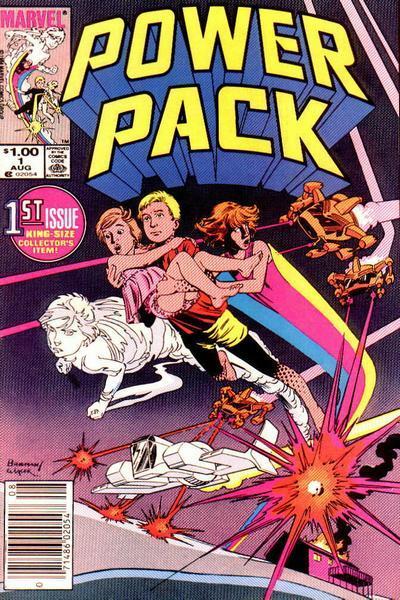 At the time superhero comics dominated. Archie Comics were still in print, but the Harvey Comics like Richie Rich and Hot Stuff that I had grown up on had just ceased publication just a year or two earlier. It was a time when superhero comics were still accessible to young readers, even though their readership was just beginning to skew older. So a true kid comic with true kid protagonists was not to be found anywhere. With the exception of Power Pack.

Though I first bought Power Pack at my local comic store (later I got a subscription), it could still be found on the spinner rack at grocery stores and 7-11s. A comic book was only a little more than a candy bar and just as much of an impulse item for your average kid. Not that kids don’t still buy comics, but when they do, they’re not superhero comics, and they have to commit to a graphic novel which can run 10 bucks or more, not exactly pocket money. Pamphlet comics like the kind I bought as a kid can only be purchased in comics stores at 3 to 4 bucks a pop, and they're no longer written for kids, and kids don’t buy them. The average comics shop patron is over 30, the same readers that bought superhero comics in earlier decades, grown up.


Power Pack Classic, the recently published reprint series, has been marketed to this audience. It’s sold alongside superhero books from the same era as a nostalgia product, and nostalgia is the stuff that superhero comics live and breath on. It is not marketed to kids, but Power Pack remains an excellent and very accessible kid’s comic. And thanks to Marvel’s marketing department, Kids don’t know it exists.

Four kids, Alex, Jack, Katie and Julie Power live in a beach house with their physicist dad and illustrator mom. There are reports of UFOs in the news, and Katie, the youngest, is sure she’s seen one. Katie, like C.S. Lewis’ Lucy in the Narnia books, is not immediately believed, but the UFOs were in the news and the kids are curious. They decide to camp out on their deck just in case they might catch sight of one. Jack is skeptical (or pretends to be) and Alex, the science kid, wants to see if he can see one through his new telescope.

Katie  is the first to see what turns out to be a spaceship that’s crash-landed on the beach just behind their house.The spaceship is Friday, an artificial intelligence or “smart ship” (which in a world of smart phones and Siri turned out to be a nice bit of unintended prescience) piloted by an injured alien (nicknamed “Whitey”) with the head of a seahorse. They're being chased by lizard-like Snarks, a pernicious alien race that is after the plans for a matter-anti-matter device the kid’s physicist dad has invented. When the same device was developed by Whitey’s ancestors, his entire planet was wiped out, so it's Whitey's mission to prevent this from happening to our own planet, but the Snarks want to build the device to use as as a weapon. After searching the Power’s home the Snarks are unable to find the plans, so they abduct the kid’s parents.

What the Snarks don’t know is that the device has already been built, and is set to be tested by their Dad's boss Carmody the following day, only hours away from wiping out the earth.

Meanwhile Whitey is dying. But there’s one last hope. Among other powers, Whitey can produce force fields and teleport short distances. Before he dies he can transfer some of his powers to the kids, but it’s dangerous and might not work, or worse,could turn them into monsters. The kid’s agree that there’s nothing else to be done, and so before Whitey dies, he gives them his powers. At first the transfer doesn't seem to have worked. With the help of Friday, they try to save their parents from the Snarks, and in the attempt their powers emerge, and each of them get a different power.

The first issue ends on a cliffhanger—they’ve got to save their parents, stop the Snarks from getting the plans for the device, and stop the device from destroying the world. Since this is a superhero comic, the kids decide to each adopt superhero names, a trope that seems a lot more natural coming out of the mouths of kids than adults.

So in all of 36 pages, not only do we get an origin story and a briskly told adventure, but Louise Simonson and June Brigman manage to give each of the Power kids unique personalities, rather than the typical archetypal shorthand that often served for character development in most superhero comics at the time. These are genuine, believable kids, rare not only in comics, but in middle-grade fiction in general, which is the market where the book would easily fall if it were sold today to actual kids instead of aging adults.

One of my favorites is Jack. As a kid I identified with Alex and Julie and didn't like Jack at all, at least initially. He's always teasing--and sometimes bullying--his siblings and making smart-alacky remarks. But even in this first issue we get enough of Jack's vulnerability and insecurity to identify with him--all that bravado is just a mask for his fears. This makes it all the more admirable when he exhibits bravery and generosity as the story progresses.

The first volume of Power Pack Classic reprints the first 10 issues spanning 250 pages. And of course the kids save the world and have other adventures, and continue to develop and grow as characters in a way that few characters in superhero comics do, but I’ll let you enjoy the rest of the story on your own.

I would be remiss if I didn’t talk about June Brigman, the artist who brought Simonson’s script to life. Brigman can draw believable kids with real kid bodies, a rare talent in artists who draw superheroes for a living.  I remember noticing this strange phenomenon even at the time—when some of the best of the superhero artists would draw kids they always tended to look weird. The proportions were off, the body language was exaggerated and they looked more like dwarfs than kids. Brigman's figures didn’t just look like kids, they held themselves like kids, and moved and and expressed themselves like kids. And now, as an adult and professional illustrator as I admired the art for some reason out of everything else I couldn't help thinking, “she draws such great feet!”

Even as a kid I knew the book was well-drawn—I of course had surprisingly good taste—but Brigman was also a a great storyteller. She knew how to crop an image just right to imply action. The action flowed in a way that was clear and easily readable, while a lot of superhero comics portrayed choppy breaks in the action to the point where you couldn't tell who is punching who, or what had just happened before.

Though. as a kid I continued to follow the comic through at least half of its run, once Brigman left it was never the same. The artist who followed her, Brent Anderson--who also drew the last story in this collection--did a laudable job, but he didn’t have that talent for drawing kids that June did. As the series went on, the stories became increasingly dependent on the inclusion of other Marvel Comics characters into the mix. Even in this volume we get guest stars like Spider-Man and Cloak and Dagger. Early on, the kid’s interactions with these characters made for good stories. There’s a particularly effective tale where they have to hide Dragon Man in their basement, a child-like truck-sized monster.

I can’t help thinking that all these guest stars were a mistake. The guest stars had a tendency to pull the focus away from the kids, and Power Pack stories without them were always better for it. There was one exception: Franklin Richards, the 6 year old son of Mr. Fantastic and The Invisible Woman from The Fantastic Four, a character that Simonson and Brigman gave more life and depth to than any writer on the Fantastic Four had ever managed.

My guess is that these guest stars were included to attract more readers, but after a while it was as if they couldn’t sell the book without them. The series lasted 62 issues, but I stopped reading when Louise Simonson left earlier in its run. After Brigman left, the comic was running largely on fumes, and once Simonson was gone as well all bets were off.

Where Is Power Pack Now, When We Need it?

There have been many revivals and revamps of the characters of the years. In a desperate attempt to appeal to kids, there was even a version that was done in a more contemporary manga style. But as far as I’m concerned, this is not a franchise where the talent is interchangeable. Louise Simonson and June Brigman are the true heart of the book, and without them Power Pack isn't Power Pack.

If Brigman and Simonson ever did revisit to the book and Marvel had the smarts to market it to its rightful audience, my hope would be that they would dispense with the guest stars and get back to focusing on the core kid characters. Tying the book to Marvel’s 1980s continuity is the only thing that makes this reprint edition less accessible to a contemporary kid audience. Otherwise I could see it selling well alongside contemporary kid-focused fantasy comics like Kazu Kibuishi’s Amulet.

Power Pack is a rare and underappreciated gem that deserves its place among the best contemporary kid lit.
Posted by Jed Alexander at 6:28 AM