In Defense of Keith Giffen

As a kid growing up in the 80s, Keith Giffen's art was both a prevalent, and a polarizing presence in American comics.  Sometime in the early 80s Giffen went from being an unremarkable Kirby clone: 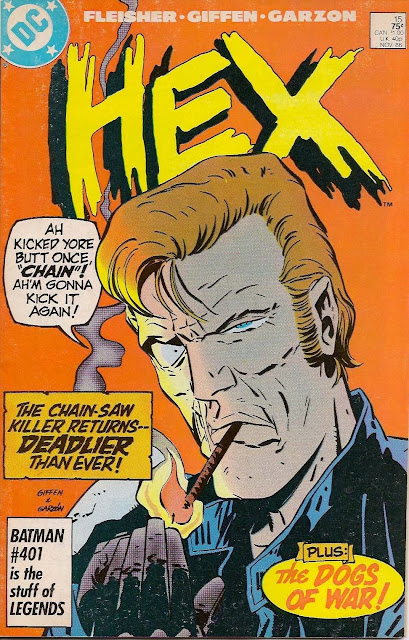 Unfortunately, it turned out that this style wasn't exactly the height of originality either. Instead of Kirby, Giffen was aping a Argentine cartoonist little known at the time in the states, Jose Munoz: 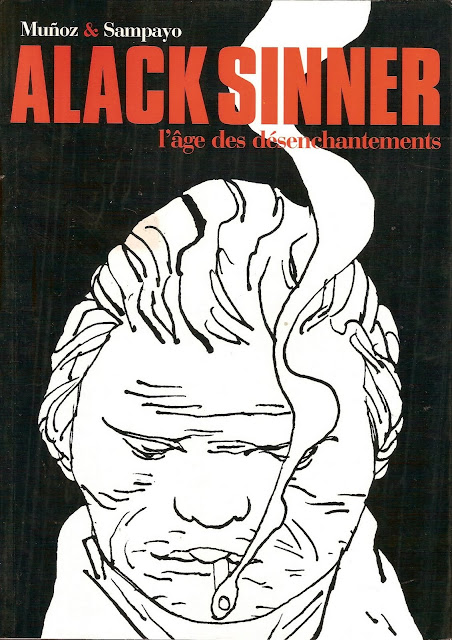 In some cases outright plagiarizing whole panels of Munoz's work. This became somewhat of a scandal, but not enough for Giffen to no longer get work.

Forgive the tangent, but as much as I like Giffen, Munoz was, and is, in every way a more talented artist than Giffen. There's really no comparing them. Take a look: 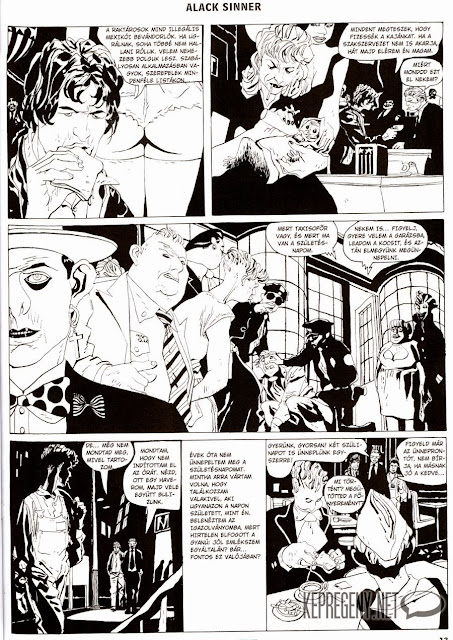 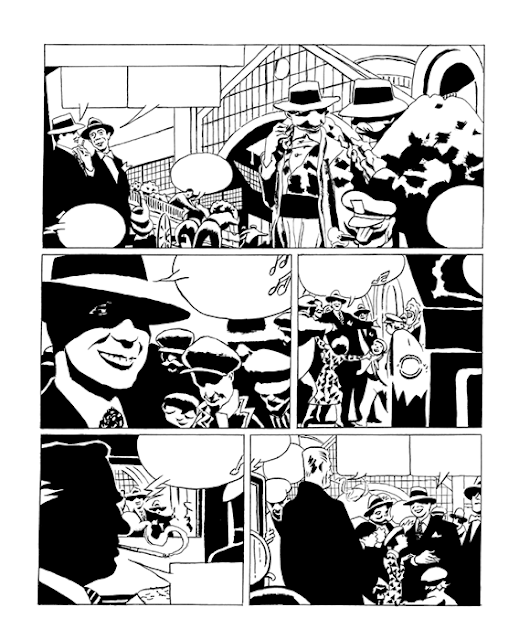 But Giffen continued to get work. A lot of it. He was doing work for mainstream franchise characters for both Marvel and DC. While little more than a decade earlier  DC Comics hired Al Plastino to redraw the faces of Superman drawn by Jack Kirby at the height of Kirby's popularity, because Kirby wasn't drawing Superman "on model," they let Giffen draw Superman like this:

Despite fan protests, they kept hiring him. Fan's protested not because he was plagiarizing another artist (whom most fans had never seen), but because a lot of them just plain hated it. But they kept using him. Maybe it was because he was good at meeting deadlines. Maybe he was just a really nice guy. I once read a quote from one of his peers, who gave Giffen the feeble defense of being a "homage artist." Whatever that means.

But in the 80s, I'd never seen Munoz, so I hadn't yet had the opportunity to form a bias. I was wide open to Giffen, whose work didn't look like any other artist I'd ever seen, and I fell in love with it. I remember being particularly enthralled by a Menthor serial he did in one of the many, (and probably the best) T.H.U.N.D.E.R. Agents revivals. I think it was in one of these stories that I discovered later a couple of panels or figures that were direct swipes from Munoz. But still, Giffen had his own way of doing things: 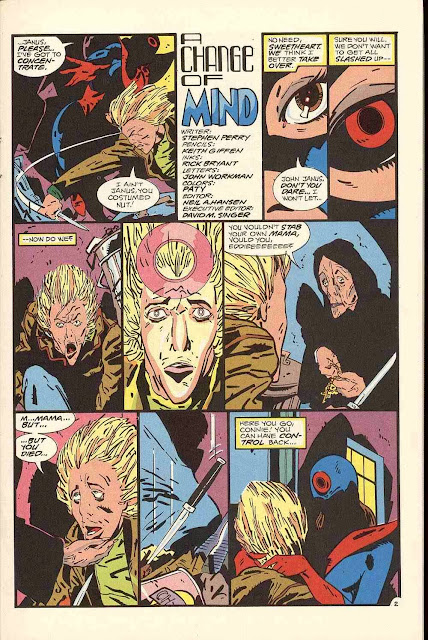 Dense layouts, sometimes with no gutters between panels, the images often oddly cropped, sometimes so much it was hard to decipher what was going on, but it was definitely his. It had it's own character and language. Lacking the draftsmanship of Munoz, Giffen instead distilled stylistic elements from Munoz's work to make his own symbol vocabulary.

While there was a good deal of experimentation happening in franchise comics at the time with artists like Miller and Sienkiewicz, what Giffen was doing was so different, his formal language so idiosyncratic, it had more in common with contemporary indy cartoonists like Ron Rege than what was being done then.

And sometimes his pages could be elegantly designed. This one-off he did for Spider-Man is a particularly good example: 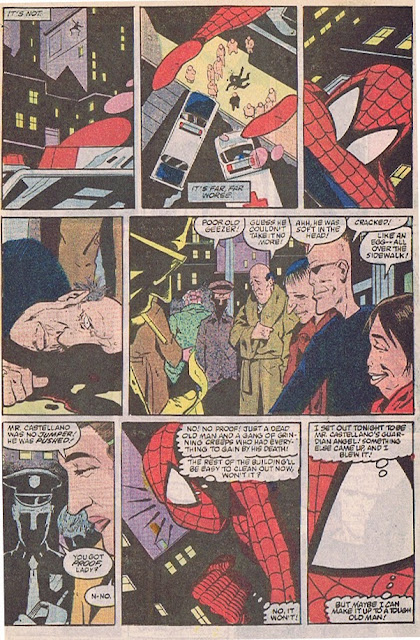 And other times the action could be completely incomprehensible: 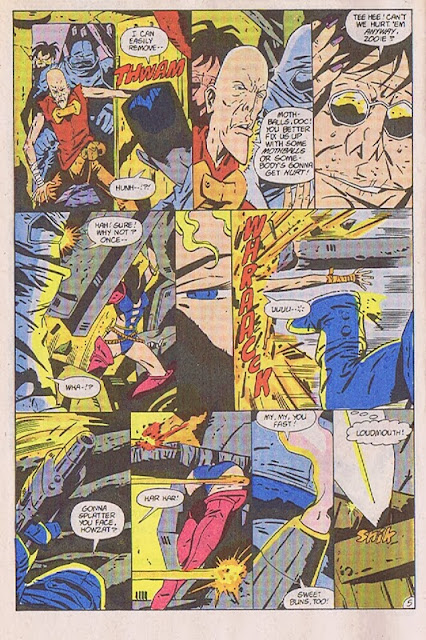 Then his work could veer into complete abstraction, pure shapes and patterns:

To the point where he went so far away from Munoz territory that there really was no comparison. Then there was the famous Giffen 9 panel grid. Here, again from Spider-Man: 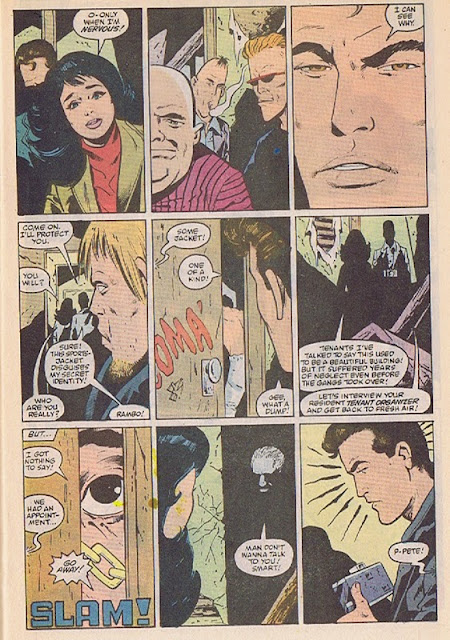 Giffen would sometimes do entire issues with the same 9 panel grid. For his adaptation of Robert Bloch's Hell on Earth, he even went so far as to do a 16 panel grid: 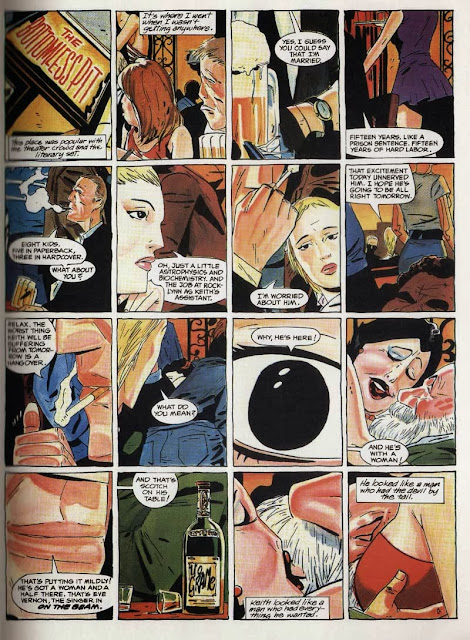 With, of course, at least one close-up of a giant eyeball. That was Giffen. I don't know who colored this one, but the colors are fantastic.

Fans tended to respond better when Giffen was doing humor. His own creation, Ambush Bug had a cult following for a while. 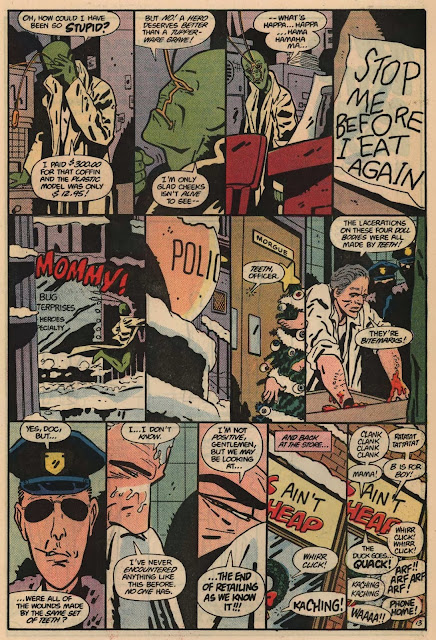 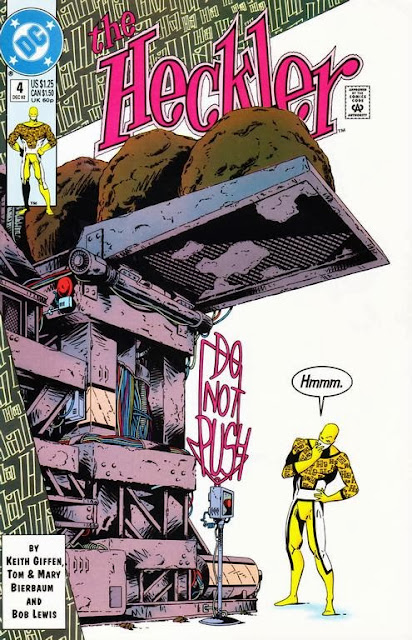 But Giffen scored better with fans with his run on Justice league, doing only layouts and plotting for Kevin Maguire's pencils, and J.M. Dematteis' dialogue. As long as he wasn't drawing, apparently. But once again, his layouts had a typically idiosyncratic approach: 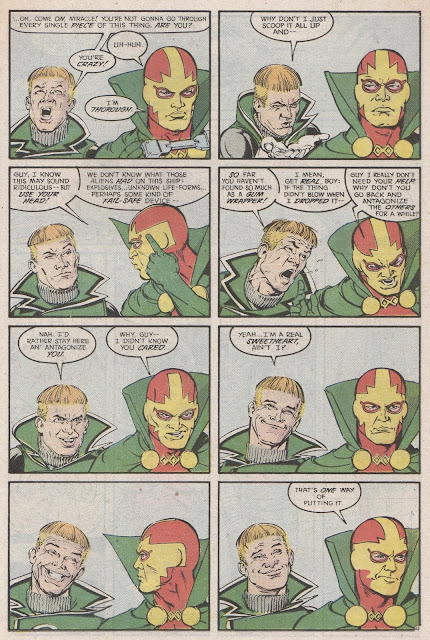 And some time after that, Giffen aped...Kevin Maguire. 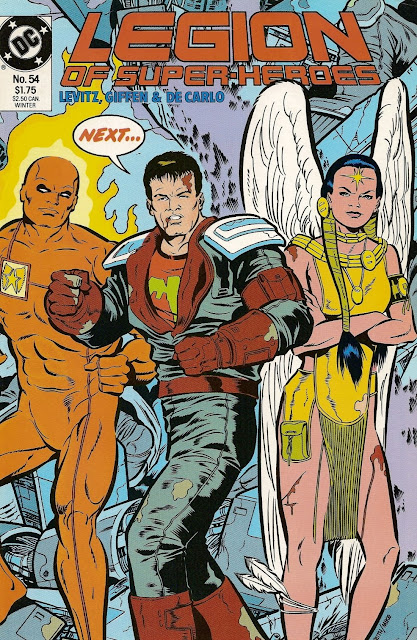 According to my sources, in an earlier incarnation of Legion, Giffen did impersonations of various other artists, but this particular impersonation is notable for its shamelessness. He just couldn't stop.

During the 90s, he changed styles yet again, trading all those dark spotted blacks for near incomprehensibly dense contours with Trencher: 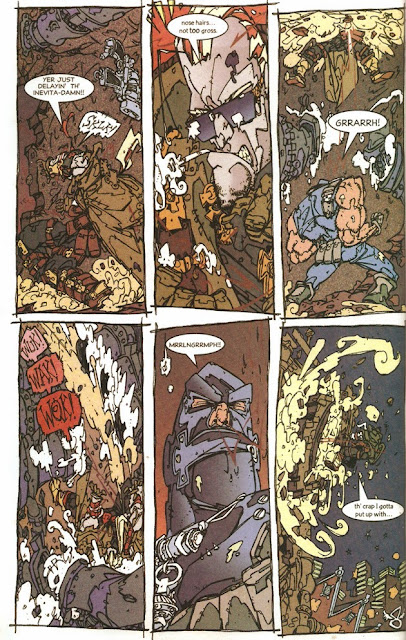 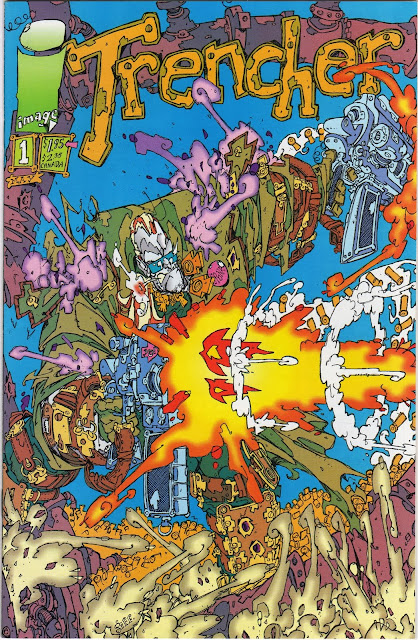 Which fit right in at Image Comics, with their splashy exaggerated action over substance line of creator owned books. Though it wasn't exactly a huge hit.

Now Giffen has given up drawing altogether except for occasional layout work, sticking mostly to scripting. At least I think so. I haven't read any of his new stuff. But I think I'll always prefer the old stuff.