Toomai of the Elephants 2nd Illustration

Edit: a different color option. This top image was added later as an experiment. I made the foreground stuff cooler to add depth.

Essentially, this is not a successful image. The figures get lost in these giant set pieces and props. But I learned something for the next time, and it's not a bad image, just not an effective illustration. 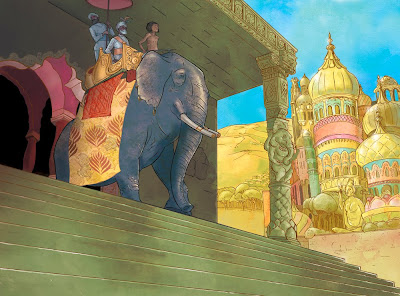 And one more tweak: 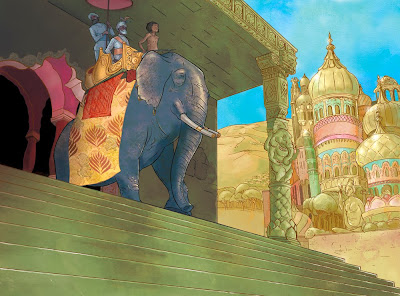 Yeah, I know, you can't tell what I did. But I know, at least. And it makes me feel better. basically I desaturated the background to push it back a little. Subtle, but I think, effective.

This has been a long time in coming, but here's the second of what will be three images from Rudyard Kipling's Toomai of the Elephants. In this picture Toomai imagines his elephant, Kali Nag, as a retired elephant, carrying a raja on his back and adorned with gold. I wanted to show the picture from a low vantage point to give the elephant an exalted look. 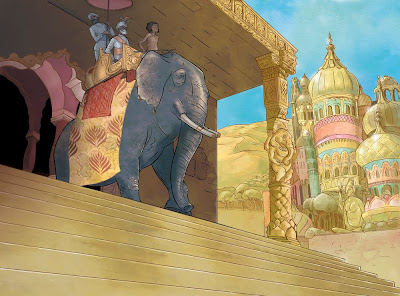 I tried to push the color in this one, using reflective color in the shadows of the buildings and elsewhere, for instance: the color of the sky reflecting into the shadow of the onion shaped tops of the towers. Also the blue of the sky reflects into the mountains, but since the mountains aren't a shiny surface the blue mixes with the yellow to become more of a green.

Another example of reflective color is in the elephant. If you look at the previous Toomai image you might notice that the same elephant is portrayed as a very dark green, picking up the green of the jungle. Here the elephant is more in a blue range. But this isn't only done for the purposes of naturalism--the blue in the elephant also helps to unify the picture with the other blues in the image.

Other unifying elements include the pinks and purples in the entrance with similar pastels in the buildings, and the fish pattern repeated in the pillar along with the elephant effigy.

To get the gold effect on the carriage and the textile pattern these had to be warm, saturated low-key yellows in contrast with everything else in the image. All the other yellows are less saturated or lower key. 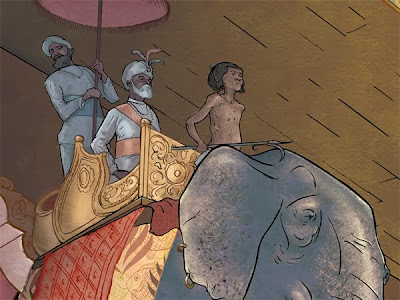 The architecture was a particular challenge. I haven't drawn much architecture in the past but have recently been pushing myself to do more of it. You just can't avoid the fact of architecture for long if you want to portray believable locations. 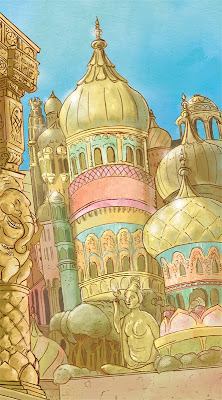 I found this textile pattern and really liked it, so I made an attempt to duplicate it. 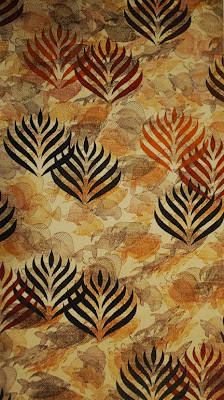 I made these fish and leaf images and repeated them to emulate the pattern.

It doesn't have the character of the original textile, but it was still pretty effective. 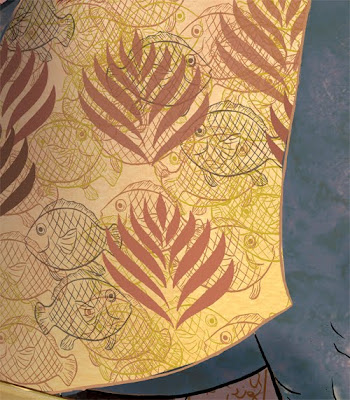 As before, I did all my line art separately and assemble it on the computer. This means I end up finishing figures and props that will eventually be cropped out of the picture. The advantage of this, I feel, is that the image becomes more of a complete space--there's more of a sense that things continue on beyond what you're seeing in the picture. 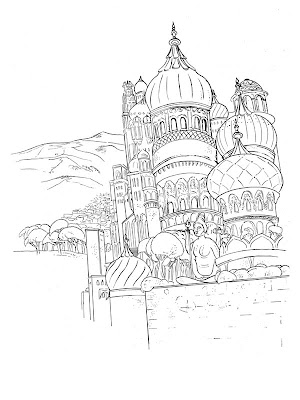 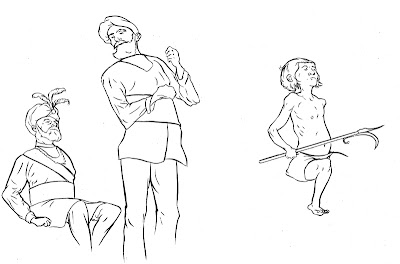 In this drawing of the elephant the elephant has a kind of anklet, but this didn't end up working, so I omitted it from the final image. 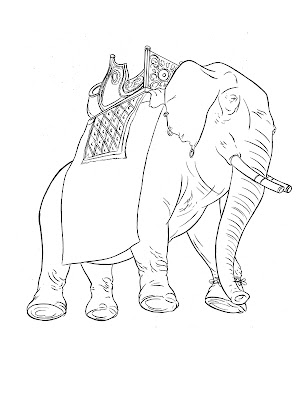 Some examples of the many reference pictures I collected. So far I've accumulated hundreds of pictures for these two images, for this and the first Toomai image posted earlier. Again I print them out in black and white to save ink. 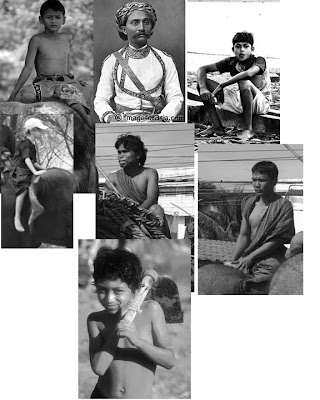 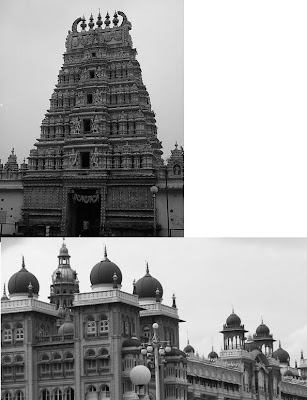 Almost all the textures in my images are scanned organic textures and I have a small library of scanned textures to work from. I try to scan new textures for every image to add variety. This time I scanned some opaque paint textures, so this image includes acrylic, pastel, and watercolor textures. 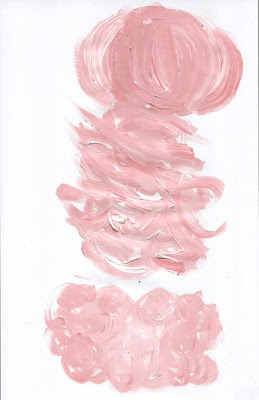 Posted by Jed Alexander at 7:47 AM