Thoughts on Disney's Bambi, or How Cute is Too Cute? 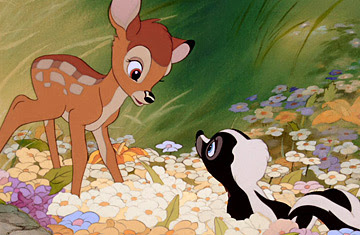 I Saw Bambi for the first time last night...

Somehow I've gone my whole life without seeing Bambi. I saw it for the first time last night. I've re-watched, or watched for the first time a number of Disney films recently, the most surprising of which was the Sword and the Stone--that movie really captured the style of Bill Peet, who, unusual for Disney, got a big screen credit at the beginning of the film. The best of them was Pinocchio by far. But back to Bambi--

Disney studios pioneered something they called, the multi-plain camera, and I think they made more use of it in Bambi than in the earlier Snow White. The multi-plane is an elegantly simple design--layer after layer of glass panes with painted backgrounds on them are slowly pulled aside during a pan. Sometimes there would be dozens of these glass panes, spaced in front of the animation cells to provide an incredible amount of depth. You can extend the pan even further if you allow it to go into shadow, which is what they did in the opening scene of Bambi, basically starting the whole process from the beginning when the scene emerged from shadow. This sense of depth was attempted before, and successfully by means of an entirely different method previous to Disney by Fleischer studios (best known for Popeye and Betty Boop). Fleischer shot their animation in front of three dimensional models which they slowly turned on a large turn table. It looked surprisingly seamless, but the multi-plane provided an even greater amount of depth and never broke the illusion with live action photography. So Bambi opens with this long multi-plane shot, but it's still a very early use of the technology, so it's not quite as seamless or effective as it is in the long city pan in Pinocchio, which they made right after Bambi. Sometimes the painted edges are a little too obviously flat, or there's scratches or dust on the glass. It's subtle but noticeable. Still, it's a great shot.

Here are some great examples of these kinds of panorama shots. Stills, unfortunately, don't give you the full effect of the multi-plane camera, but they're still pretty cool:

The real star of the show in terms of effects, was the way the water was animated. Later Disney animators would comment about how difficult it was to animate scenes like the one with Pinocchio inside a swinging cage, or that long city pan I mentioned before, while the audience took more notice of the ocean scene later in the film. These water effects were what the audience really marveled at. There is no wonder why, when you see the water effects in Bambi. I'm not even sure how they did many of them. reflections, overlapping foreshortened concentric circles of distortion on the surface made by water drops, various effects of rain, condensation, splashes and undulation, the water in itself is an incredible achievement. More recently, in contemporary 2D animation, as rare as it is these days, computers are used extensively to create the illusion of water, but the water in Bambi is pure handcraft on a level that we may never see again.

The characters, as always, are everything that we associate with Disney. I don't really have to explain this. You know what I'm talking about. Disney. But however you feel about their Disneyness, they're beautifully animated. I once read in an interview with Walt Kelly, who had once worked for Disney, how disappointed he was with the now seldom seen animated special of Kelly's creation, Pogo, made by Chuck Jones. He said that Jones was attempting, and failing, at what he Kelly decided Jones must have thought was a Disney style. He had his characters bat their big lashes so they would seem more endearing. Jones would attempt to do a Disney impersonation more in earnest later when he did his Kipling TV adaptations of Rikki Tikki Tavi and The White Seal. Though there's some great character animation in those films, you can really see what Kelly means when he talks about the batting eyelash thing. Once you notice it, it's such a cheap little trick, it becomes distracting and obvious. But as Kelly says, this wasn't at all what Disney was doing. 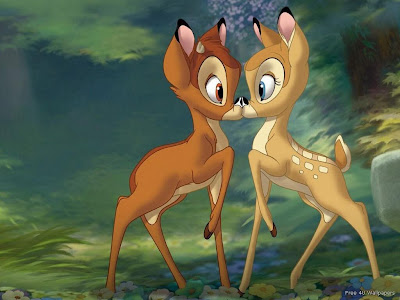 Yes, the characters in Bambi and other Disney films occasionally bat their enormous eyes,but what really makes them endearing is the way they seem to discover and indulge in the sensuousness of the world around them with every sense. It's a sensuousness that exudes from their whole bodies. While we were watching the film, Reg felt suddenly compelled to lie next to our dog Cinder, who is always up for a cuddle. Disney's characters tend to illicit that cuddle reflex.

My reaction to this is two-fold--I want to give Bambi a hug. But I also feel a little manipulated. A little bit used. This cuddliness becomes aggressive as more and more characters roll and shimmy onto the screen with their cumulative cuteness. So while I appreciate that Disney can elicit this kind of affection for ink on acetate, it's a little too much of a good thing. When everything is turned up to the same volume of cute, there's a monochrome quality to the effect. The whole point of it is simply for you to desire it, and you both expect, and anticipate it. This is when I feel manipulated. I've heard pornography described similarly: the only objective of pornography is for you to desire it. While Disney's objective is more complex than this, this tendency towards indulgent cuteness is pervasive. It's also effective. The audience falls in love with the characters. I think they do for genuine reasons beyond the characters existence as cute porn, but it doesn't hurt.

So how cute is too cute? I don't have a real answer to that. I don't think cuteness, or indulgent cuteness, is a bad thing. Maurice Sendak elicits this kind of sensuous quality in his book, In the Night Kitchen, whose protagonist is by no coincidence named "Mickey". Somehow he manages to elicit these feelings without the same kind of aggressiveness. I can't put my finger on what he's doing that's different, but it seems more sincere to me.

Sometimes I fear that I'm verging on Disney cuteness, rather than Sendak cuteness in my own images. While I appreciate some images whose main purpose is to elicit this kind of emotional response, it's not what I want to do with my own images.

Posted by Jed Alexander at 3:34 AM