A Million Things to Do: Works in Progress

I only tend to post my finished work. This may make it seem like I don't actually produce all that much, and someone once remarked that they liked my work but I was "slow". Let me dispel that notion right now. I'm usually working on several projects at once. Here are a few of them.

3 of 30 designs (presently) from a proposed monster book: 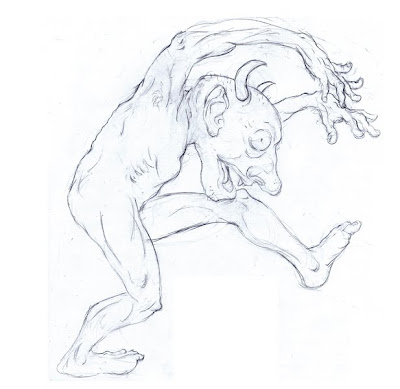 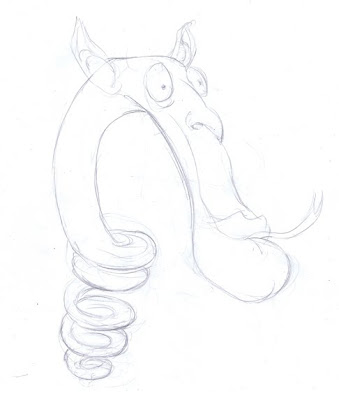 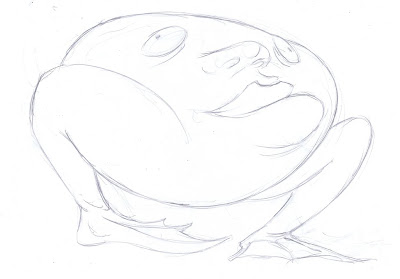 Two blue-lined panels for a wordless sci-fi comic. Right now less than 3 pages penciled, nothing inked. This one is at the bottom of my priority list, but getting done slowly. I did character designs for it about 2 years ago that some of you may remember being posted. Its been on the back burner for a while, but now it's sort of on the 4th burner. 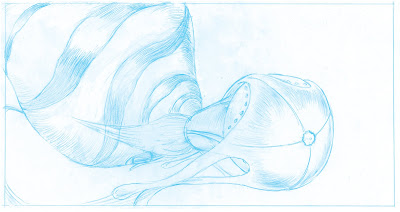 On the drawing board now: the background for a Christmas card mailer. I was able to improvise a not completely accurate makeshift curvilinear grid, and I'm pretty happy with the way it's came out. I wasn't sure if it was going to work, and have never tried anything quite like it. I don't know how well you can make it out, but this is birds-eye view of a town on a curved landscape. 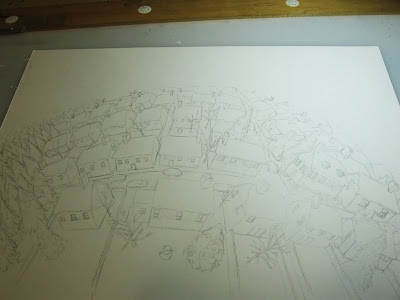 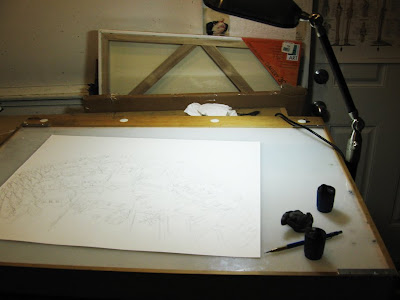 I'm also in the process of writing the final draft of my first young adult novel for teens, and completing the first draft of a second, approx. 60,000 words each, or the equivalent of 200 book pages each. I have a first draft of a chapter book for young readers that needs to be rewritten, so no new writing projects until I get at least one of these in the can.

I used to find that when I started several projects at once, nothing really got done, but recently I've been more consistent about finishing things I start. The key, it seems, is not to set any one project aside for any great length of time, the one exception being book manuscripts. It's good sometimes to sit on a manuscript for a while once I have a completed draft so that I can return to it with fresh eyes.

Since having a bunch of stuff in process tends to turn my studio into a mess, I came up with the recent strategy of putting each new project in a project folder when I'm not working on it, unless it's too enormous to fit, in which case I'll just put it in my generic too enormous to fit portfolio.

Then there are projects I'd like to do that I've done preliminary sketches for, and I have a file for story ideas, but all that stuff isn't going to be touched for a while, and no new drawing projects until I've gotten a least a 2 of my current drawing projects in the can.

I've not been so great about keeping sketchbooks, but I still do random stuff and little drawings. I think I'm going to have to put together a project folder for this stuff too. Here's a little drawing that falls in this general category: 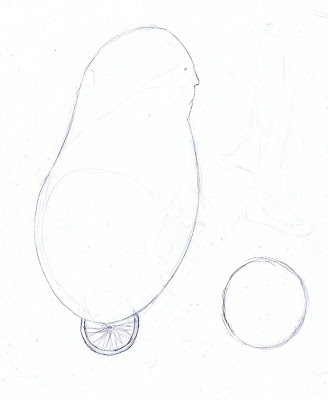 Then I have a two person show to prepare for at The Pence Gallery next February, where I'll show some completed work that hasn't been shown, and some new pieces that still need to be produced. The show will showcase my drybrush and watercolor work of animals and landscapes.


This may seem like a lot, but routine definitely helps.
Posted by Jed Alexander at 5:35 AM