Toy Story 3, or How to Effectively Betray Your Audience 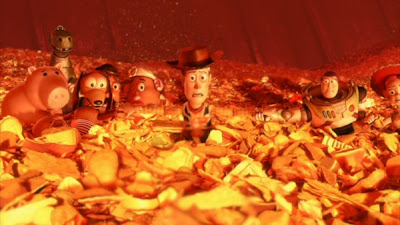 Last night I saw the movie Toy Story 3, and there was something about it that really bothered me. If you're going to see the movie and you're someone who doesn't like it when someone else gives away the ending, I'll warn you when that part is coming, but first I want to talk about storytelling in general.

At a recent Society of Children's Book Writer's and Illustrator's conference that I attended, an accomplished writer outlined for the audience the standard formula behind the majority of the stories we read: place the character in some kind of jeopardy--whether moral, emotional or physical, the character is placed in a situation where they are compelled to make a decision. How they choose to deal with the dilemma reveals something about their character or is reflective of who the character is. How they come to the decision, their journey, is even more important than the decision they make, because often in some of the best stories the answer to this dilemma is pretty predictable. So in the end, you have to justify the characters journey, give them unique decisions to make that reflect who they are. And then there's the other way that writers tend to keep their readers engaged: stirring the pot. Adding conflict that further complicates the dilemma. The author chose to describe this concept in a very dramatic way: jumping on chairs, shouting and gesturing to illustrate his point, as if the more dramatic his presentation, the more effective it would come across, but I couldn't help feeling that there was a certain amount of insecurity behind the act, that he was doing his own form of pot stirring.

Good Stories Don't Have to Follow This Traditional Formula

Not all great stories follow this path. One of my favorite stories is Alice's Adventures in Wonderland and its sequel, Through The Looking Glass. These stories are comprised of a series of surreal anecdotes. Alice responds to each vignette with curiosity, but her character doesn't fundamentally change. Kafka's the Trial is similar--the pot is definitely stirred, but K's responses to the dilemma's of the story are emotionally monochrome--while Alice deals with each dilemma with curiosity and frustration, K also deals with every conflict in the same way, with frustration, but also an unmodulated level of moral outrage. Each is a relentless surrealist drama. The journey and the nuances of the journey are significant, but no conclusions are drawn. The characters are basically cyphers, but using a cypher is an excellent way to engage the reader as a participant.

Songs, Nursery Rhymes and poems can also work this way, for example:

Hey diddle diddle,
The Cat and the fiddle,
The Cow jumped over the moon,
The little Dog laughed to see such sport,
And the Dish ran away with the Spoon

This is very striking narrative imagery, a story of sorts, and though it's more verse than story, I wouldn't discount the fact that there is a narrative, that there are characters, and there are situations, but they have nothing to do with traditional story conflict. This is as valid a way to tell a story as any, and it's not a new one. What used to be called, "nonsense verse" has virtually disappeared in contemporary children's verse in favor of literal narrative, and I think it's a trend that represents a great loss to children's literature.

Margaret Wise Brown's classic, Goodnight Moon is simply a story about a bunny saying goodnight to the world before he goes to sleep. Another one of my favorite books, In the Night Kitchen by Maurice Sendak, is a journey of sensations, of flying, of playing in dough, and though the bakers in the story are sometimes menacing, it's not about a conflict between Mickey and the bakers. At least not in a traditional way. They threaten him and he escapes, but it's really not about this conflict. You never have a sense that Mickey's jeopardy is what we're focusing on in the story. It's about the journey in a much more personal way. Mickey is not fundamentally changed by the story in the same way that Max is in the more popular Where the Wild Things Are, but it's still an effective story. Mickey, too, is somewhat of a cypher, but he still is a character who makes decisions and has opinions, even more so than Alice and K.

Lazy Storytelling: Do You Have Something to Say, or Are You Simply Stirring the Pot?

But coming back to more traditional story structure, to stirring the pot: how much, and just how should you put your character in jeopardy?

There are two kinds of jeopardy in a story:

1. Jeopardy that enriches the character's dilemma, that reveals something about them and their interactions that is specific to character.

2. Jeopardy that simply pushes the readers buttons, that elicits an emotional response through some universal experience such as a physical or emotional threat.

The second variety usually involves loss or harm in the most superficial sense--the loss of something or someone valued, or the threat of death, or even better: both. I always know that a story is potentially in trouble when it begins with the death of a protagonist's near and dear loved one. This is a hard scenario to pull off without being emotionally manipulative, because it's at its core an emotionally manipulative situation. Before we know anything about the character we are asked to feel sorry for them. To turn that sympathy into empathy, you have to give us a reason to identify with the character and their dilemma that is specific to them. Otherwise it's simply loss for the sake of loss. So everything after that death must justify that death or you're simply eliciting a generic emotional response.

Put a character we don't identify with in jeopardy, and the audience is removed from the threat. Similarly, if you make the stakes too high, you may elicit an emotional response from the reader, but in the end, you don't fundamentally engage them. You simply engage them on a very primal, emotional level. You get them to feel, but you don't get them to think. These kinds of stake building stories tend to be effective in getting a reaction from the audience, and are often successful, but I don't think they're doing the best thing that stories can do. I don't think they engage the reader in a way that is truly meaningful. For me, this was the central weakness of the currently popular Hunger Games series--by book three the stakes have been driven so high, the character has lost so much, that it was hard for me to care anymore. The level of emotional button pushing had surpassed my ability to empathize with the character. 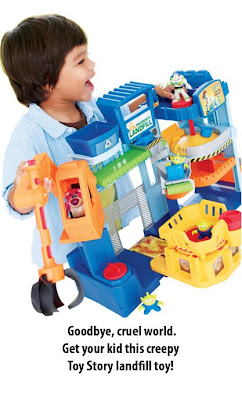 Which brings me back to Toy Story 3. Initially you have a conflict that involves all the characters in a way that engages them individually, and in the case of many of the key players, how they solve the dilemma, the decisions they make, reveal something about their character. Barbie betrays her love interest, Ken, to help her friends. Woody leaves a happy and comfortable life with the little girl who finds him and abandons his search for Andy, to save his friends. Their decisions are predictable, but it's how they make the decisions and how this process reflects their individual characters that's engaging, or at least, that's the general idea.

Typically, as in most stories and, unfortunately, most children's stories, it's about white hats and black hats. We've got good guys and bad guys, but the main antagonist is made to be the most intriguing because of his inner conflict. He's given his own journey, his own moral dilemma, but makes a different moral decision. Like Darth Vader, Lots O' Huggin' Bear goes to the dark side.

Then it all comes down to stirring the pot.

In bad storytelling, it's all about pot stirring. There's no substance to it beyond the superficial danger. The protagonist is an archetype, and the threats have no real emotional resonance.

But there's nothing wrong with stirring the pot when the characters and conflicts are well established and fully realized, with adding a few superficial conflicts to engage us with the dilemma of the character. That's good storytelling. But in the best storytelling, you must respect the reader. Once you have them emotionally engaged, you've put them in a vulnerable position, and its a position that's easy to exploit. You've got them in your thrall. Now, when you stir the pot, every additional conflict pushes the reader further on an emotional level. But you must respect the reader.

If you exploit this too much, you're doing the reader an injustice. When the new conflicts you introduce have nothing to do with the unique dilemmas of the character, it's all about emotional button pushing. You can up the ante and up the ante, but you're simply working the audience. You're not trusting the strength of the characters you've established to carry the story on their own. Filmmakers like Steven Spielberg and James Cameron are very effective at this: they feel this need to seal the deal, to make sure that the audience feels something, but they don't trust the characters ability to do this on their own, so they amp up those emotions through superficial conflict. Sometimes, especially in the case of Cameron, this is because the characters are too poorly developed. Spielberg is capable of better, but he just doesn't trust his own story. He always seems to feel he needs the insurance.

(WARNING: THIS IS THE PART WHERE I GIVE AWAY THE ENDING) So Toy Story 3, as well, was unwilling to trust its audience. In the penultimate scene, the characters are headed for the incinerator at a city dump. Before they are saved at the last moment, Buzz Lightyear takes Jessie the girl cowboy's hand and looks at her with a pitiable expression that denotes a very adult emotion--he's preparing to die. And she gets it. And then the other characters get it. And the film holds on to this moment until they're rescued from this horrible fate, but the moment is milked for all its worth. To young children, this moment is more than terrifying. It's more than Pinocchio getting swallowed by the whale. They're being confronted with the idea of real death. It's an amped up version of The Velveteen Rabbit, a story that is similarly emotionally manipulative in a way that betrays the audience, though the Velveteen Rabbit isn't nearly as visceral. Death is a reasonable subject to broach with children, but it must be done sensitively, and this, simply, wasn't.

But even as an adult, I felt my buttons being pressed in a way that didn't ring true. The characters and their dilemma weren't complex enough to justify this kind of emotional ride. It was lazy storytelling. Pixar can do better. And as writers, we can do better. So the next time you're writing a story, ask yourself: am I stirring the pot for the sake of stirring the pot, or is adding conflict justified by character? Is the conflict meaningful, or is it insurance?
Posted by Jed Alexander at 5:26 AM