Usually when I draw figures I draw on a number of sources. I never find exactly the pose I need, but use a number of photos to get what I'm after. But every once in a while, I'll need an adult male, and so I prop up my camera, set the timer and pose. These are for a pirate piece I'm working on. 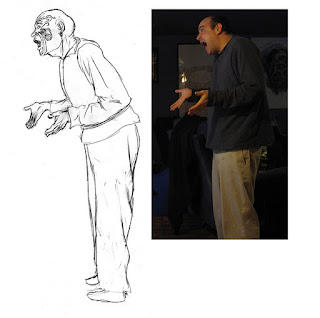 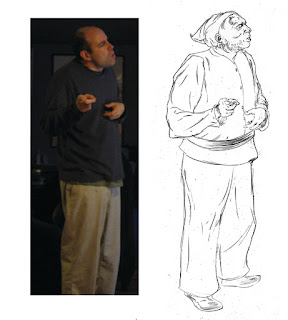 This first guy has some unpirate-like slacks, but his legs will mostly be cropped out. Those are Maori tattoos on his face, since I was thinking Queequeg from Moby Dick. I like the idea of pirates that pick up crew from allover the world with different ethnicities, but I have no idea what real pirates from this era--I guess the 18th and early 19th century?--were like, outside of Treasure Island, which is what I listened to on audio while I drew these.

What I love about the timer on my camera is that I can pose as unselfconsciously as possible, and be as hammy an actor as I need to be. Of course these photos are pretty awful, and the lighting is pretty bad. Sometimes I spend a little more time working to get better shadows, but all I really needed for these background figures were the poses.  I've got plenty of time to take as many photos as I need until I can get just the pose I want. When I translate these poses into pirates, I feel like I lose a little, and gain a little--sometimes I don't quite capture a tilt of the head or a shrug of the shoulders, but in reinterpreting my poses as the characters, I want to change their builds and features and generally make them pirates and not a bunch of people that look like me. It's easy to get into the trap of relying on the photos so much that you're simply trying emulate the photo, and that's when things start to look stiff and inanimate. Well, for me anyway.
Posted by Jed Alexander at 5:16 AM