When does Dr. Seuss Merchandise Become a Doctor Seuss Book?

Well, never. Not really. Believe it or not, this:

is not written by Doctor Seuss. It's called The Cat in the Hat, but it's written by Jesse Leon McCann and drawn by Christopher Moroney. It is based on the movie that was loosely based on the book.  Through some Amazon snafu, when you click "look inside" you get sample pages of Seuss' actual book. You also get reader reviews of the book by Doctor Seuss, not the book by McCann and Moroney. Here's the same book repackaged as a Little Golden Book: 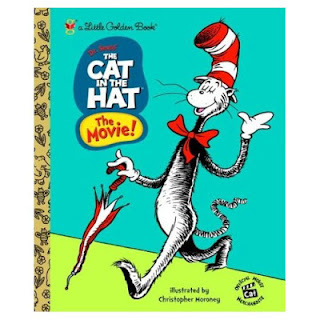 On Amazon you'll also see reviews of this one, but they're a little less enthusiastic. Once again, not written by Doctor Seuss or published in his lifetime, but it's not so easy to know the difference if you're not careful. And here are a few more: 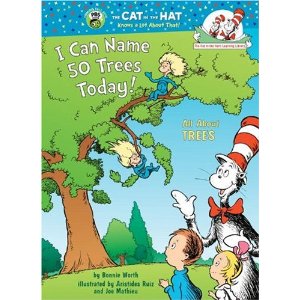 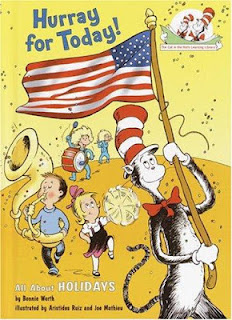 Doctor Seuss, the real Doctor Seuss, as in Theodore Seuss Geisel, had nothing to do with these books. But The Cat in the Hat is a brand. Doctor Seuss is now a brand. These are, in the commercial sense, "Doctor Seuss Books." If you want to buy your kid some "Doctor Seuss Books" these will fit the bill, but what they are is merchandising, licensed products. This isn't an unusual practice--there have been books and even comic books licensed by Charles Schulz of the Peanuts characters that he had little if anything to do with creatively. These Seuss books aren't entirely different than what Schulz did, but there is a difference, however subtle, beyond the fact that they were all done after Seuss' death. These books resemble books by Seuss, but are not books by Seuss, and they are presented as interchangeable with the original classics. They are presented as more of the same. Do you like One Fish, Two Fish, Red Fish Blue Fish? The Cat in The Hat? Then you're going to like, I Can Name 50 Trees Today. Apparently the over 50 books that he wrote aren't enough.

It's not really worth getting worked up about merchandising and the original creator's intentions. There's plenty of horrible sequels and merchandise licensed with the full knowledge and permission of the creators of otherwise great work. Maybe they needed to send their kids to college? Or in the case of Schulz, keep his ice skating rink open. It's not for me to say. Eventually everything gets appropriated. There are a million different interpretations of Shakespeare, and I hope there will be a million more.

This said,  it seems like Seuss' work has been more bastardized than most. His widow seems to have said "yes" to everything, including several horrible movies. But the books, the books I just don't understand. Maybe they're not even that bad, but they can't be anything like the books that I grew up with and continue to treasure. They're something else that has nothing to do with good literature, and that's what Seuss' work is first and foremost--some of the greatest children's literature ever written. Kids often choose their own books, and it's a disservice to them to camouflage these books as books by Seuss. It's hard enough to find good books for kids to read, but books as merchandising only make it that much harder.

When I was a kid I had my heart set on a Little Golden Book that was a merchandising tie-in with Donny and Marie. I liked it because it had a robot in it. My Dad was a little appalled. He said, "do you really want that?" I really did. So they got me the book. I liked it, but it didn't stick with me like the truly great books from my childhood. Kids will always choose books that aren't exactly the ones you would choose for them, and if you want them to be good readers, you should encourage them to read whatever interests them. Even Donny and Marie. Even fake Doctor Seuss. But you can also make good books available to them. If you have good books in the house they'll be discovered. Kids have pretty good taste in the end, and they will find the good stuff, but the good stuff has to be around for them to find.

Apparently, there are over 70 commercial tie-ins with the new Lorax movie, based on Seuss' environmental cautionary tale, including and SUV and disposable diapers. Ahh, Seuss merchandising as its best.
Posted by Jed Alexander at 6:43 PM