Fred Rogers, John Waters and Self Esteem in America

Fred Rogers' message in Mister Roger’s Neighborhood, first and foremost, was for children to accept themselves, and to accept others. That everyone was unique, and special, and of worth. This implied an acceptance not only of the self, but of diversity in general.  He had a unique talent to speak to children, and he was very conscious of his audience. The message was directly to them. He addressed not only the need to accept yourself and to accept others, but he acknowledged the feelings of children. In his song “What Do You Do With the Mad That You Feel?” he sings,

“What do you do with the mad that you feel, when you feel so mad you could bite

When the whole wide world seems oh so wrong

And Nothing you do seems right?”

On the cusp of the punk movement, John Waters expressed his anger through his films. His films weren’t an endorsement of the behavior he portrayed, but they satirized the absurdity of what society rejected. Society rejected difference. The characters in his film reveled in that difference and rejected society’s rules, taking this rebellion to its ultimate extreme, as Waters acknowledged that rebellion too can be just as absurd when taken to great lengths. It wasn’t a rejection of rebellion, but a self awareness of it. Rebellion is necessary and healthy, but rebellion for the sake of rebellion is absurd.
As Waters emerged, so did the punk movement. The punk movement too was about a rejection of society’s rules, and the DIY aesthetic was all about existing outside a dependency on that society.  It was this kind of rebellion that Waters both satirized and embraced. He had a great affection for those who rejected conformity, but he also recognized that rebellion was not an end in itself. In romancing this rebellion, the punk movement formed a parallel culture that in its way was just as conforming. Hand painted leather jackets, Doc Martens and band pins became a uniform. The punk ethos became competitive--who could be more punk? All of this lost sight of the true origin of the movement. It became rebellion for rebellion's sake, much like what Waters illustrated in his films.
But Waters understood and embraced a similar core Ethos, and his heroine was the embodiment of it. Devine was not only everything that society rejected, but she was rejected by another emerging parallel culture, what was rapidly becoming the gay mainstream. To the more conservative side of gay culture, she was an ugly caricature. To Waters she was beautiful. She was beautiful because she embraced and celebrated who she was. Society couldn’t tell her who she could be. Waters was saying in his films, in effect, that Devine was special just the way she was.

Devine: Special Just the Way She Is 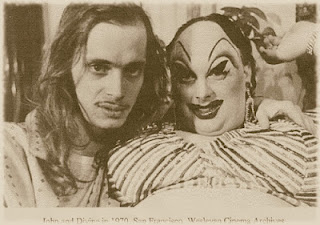 Though the parallel shouldn’t be taken too literally, Lady Elaine Fairchilde was Rogers in drag, his own version of Devine. Like Devine, she could be abrasive, she could be loud, she could be a mischief maker. She was Rogers' vehicle to express this side of himself, but like Devine, it was an affectionate portrayal. Just as Rogers loved each and every one of the characters in his Neighborhood of Make Believe for their individuality, Waters loved each and every one of the characters in his films for the very same reason. The only truly unsympathetic characters in Waters' films were authority figures, or those who caused shame in others. While Roger’s taught you not to be ashamed of who you are, so did Waters. He exaggerated and satirized shame, and showed the absurdity of the people responsible for imposing that shame. 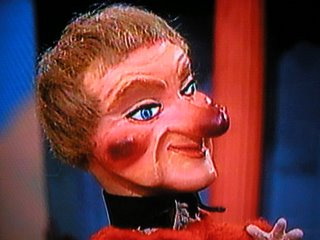 Both Waters and Rogers approaches were (and in the case of Waters, continue to be) largely uncompromising. Rogers approach in many ways was as much gorilla theatre as Waters. The sets are simple and spare, some of the performances by the cast could be amateurish and unpolished. Like Waters dialogue, sometimes Rogers songs are a little blunt, and hit the mark a little too square on the head. This uncompromising approach was also an evolving one. In the early years, before Mister Roger’s Neighborhood, Rogers incorporated religious songs into his repertoire, and initially, when he was asked to exclude them, he refused. Later he accepted that the addition of these songs could narrow his audience. In Waters earliest films he didn’t always behave in the most responsible, or humane (I think some of you might know what I’m talking about) way he could have. In more recent years Waters' has explained that he's no longer as angry as he once was.  But I don’t want to take this parallel too far. I’ll just end by saying that both men have had an enormous impact on our acceptance of diversity and individuality, and the world is a better place because of them.
Posted by Jed Alexander at 9:21 AM