This was probably my best APE so far.

We managed to cover expenses and make a very modest profit. We sold a lot of posters, and a few comics. I got a lot of nice feedback and saw a lot of new and familiar faces.

The Elephant Factory caught people's eye, but was too spendy for most people's wallets. Surprisingly a couple of people recognized it as inspired by Haruki Murakami's short story The Dancing Elf from his collection The Elephant Vanishes.

The Oz poster also drew people to the table, but we didn't sell many. They recognized it as Oz and seem to be attracted to all the colorful characters, but since most people don't have a familiarity with the Oz books in general, they didn't feel compelled to own it. Our newest popular was the one inspired by James and The Giant Peach, likely because of the popularity of the book and movie, but the Elephants on pink buildings and Bicycle Tree continue to be our best sellers.

An Encounter with the great Barron Storey

I also ran into my old teacher Barron Storey and finally got to share my new work with him. This was a very gratifying experience because I admire him a great deal and when I was in school I didn't have much discipline or technical skill. I feel like I've reached a new level of craft this year and was finally able to show it off to Barron so that he could see that I was finally starting to live up to some of the promise he saw in me 13 years ago, something he seemed to genuinely feel. I felt like I had failed as a freelancer, and to some degree, being able to show Barron my new work felt like another small benchmark in what I hope will be my future success as a freelancer.

Seated directly across from me was Zack Soto, a cartoonist I greatly admire, and also Thien Pham, a cartoonist who used to hang out with our old Bay Area crowd, someone I hadn't seen for many years. I didn't realize he had been sitting there until the end of the first day. He didn't recognize me because I had lost so much weight and because my work looked very different. Thien was also sitting next to Briana Miller, an excellent cartoonist who it was a pleasure to meet.

Then Derek Yu and Anthony Wu showed up at the table, two great illustrators who used to be on this message board called "The Block" that for a while was a very lively and exciting place for some amazing young up and comers. "The Block" thrived for a couple of years and then petered out. It was a great place to get feedback and criticism on your work, and it really helped me develop as an artist. Meeting Derek and Anthony was like meeting old friends. It was if we already knew each other.

I also got to see a lot of Facebook friends, like Ed Luce, John Pham, Hellen Jo and Tom Neeley, all extraordinarily talented folks.

Then I ran into Dean Haspiel. I hadn't seen Dean since the Alternative Comics days, and he gave me a lot of great feedback on the new work. Still the question that everyone repeatedly asked (even me) was, "are you still making comics". No matter how much new work you make, at APE, when it's your peers, it's always about comics. But between last years Blue Kid minis and this years Crimefighter, I came prepared. Since many of us haven't kept in regular touch, and since I haven't had a commercial book out since Yellow Baby 6 years ago, the fact that I was still making comics was a surprise to many.

Our display. We mounted the Elephant Factory on foam core and spent much of the previous weekend putting together the PVC display you see here. This was Reg's design, and it worked out beautifully. 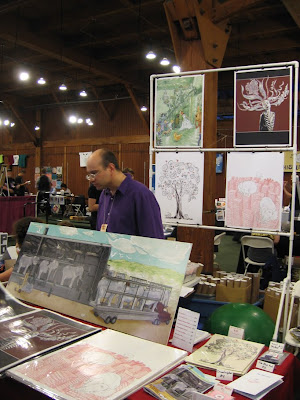 Another view of the display and a glimpse of APE proper: 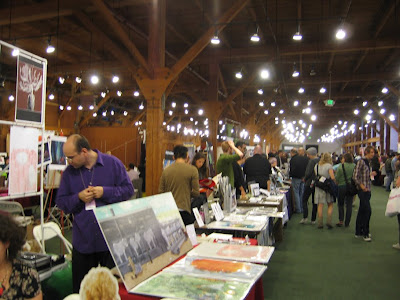 Oh yes, and our display and beauties: 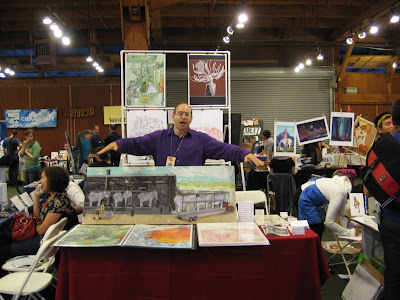 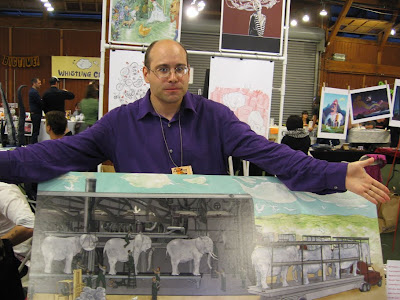 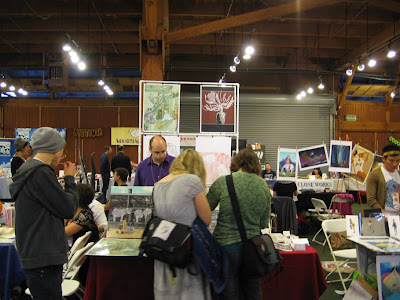 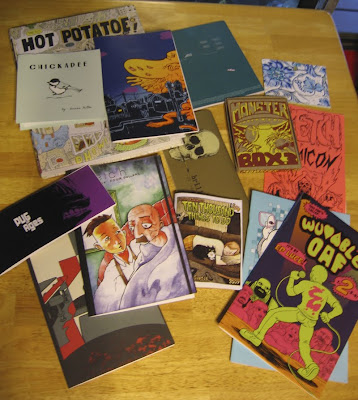 I'll try to cover everything, but I might miss a few. Here goes: Hot Potatoe by Marc Bell, Bell's gorgeous full color book of comics and pictures and paintings and sculptures and everything under the sun. Only 30 bucks! Bell was there but I missed him; Chickadee by the aforementioned Briana Miller; Ghost Attack!? by the very busy Zack Soto, who continues to make beautiful pictures but has recently returned to comics; Sublife but John Pham; a pretty little book of cat pictures from someone whose name is not written on the book; Brilliantly Ham-Fisted by Kevin Kneely--I saw some of his giant flawless originals and they are a sight to behold; Sketchanomicon by Derek Yu; Pug of Ages by Anthony Wu; The surprisingly entertaining Reich, a biography of Wilhelm Reich, issues 5 and 6 by Elijah Brubaker; Ten Thousand Things to Do by the long suffering Jesse Reklaw; and last but not least, issue #0 and issue #2 of Wuvable Oaf by Ed Luce. What can I say? Everybody loves Wuvable Oaf.

And I almost forgot! Monster Box (that little box up there) by Thien Pham and Lark Pien. Two mini comics and a shrinky dink in a box!
Posted by Jed Alexander at 10:26 AM