Comics: The Bullet Proof Medium, or Why No One Can Mess With Us 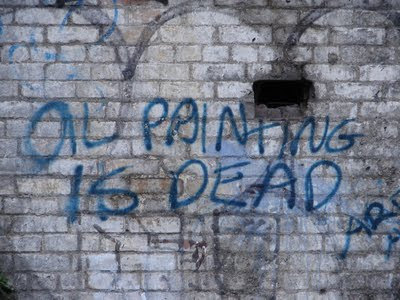 Every so often you hear someone say, "painting is dead." It's a statement that was more popular in the 80s, but every once in a while you still hear it said by academics and people who have spent entirely too much time in graduate school. This all comes from the myth that art must always be progressive, that if you're not doing something that's formally new, it's not worth paying attention to. Invention as a measure of value makes sense in the sciences, but not in the humanities.

For some reason, the visual arts focus on this idea of progressiveness more than any other discipline. You don't see this in literature, or dance or music. Value is placed on progressive formalism to some degree in these other disciplines, but not nearly to the degree that it is in the visual arts. A novel that is formally traditional isn't by default considered outmoded. But what is considered contemporary in painting focuses on the formally progressive. The idea that "painting is dead" is all about this focus, that somehow at some point there will be nothing new that can be done formally with painting. But it doesn't make sense that formal innovation is the only thing to be valued in painting. It would be like saying, because rock music has been thoroughly explored, there's no reason to write another rock song. Or since modern dance (and what could be more dated than modernism?) has been played out, there's no reason to explore it any further.

Formalism has long been the focus in visual art since the turn of the century, when formal innovation in the visual arts began to develop at a rapid pace. If you wanted to be contemporary, you had to keep up with Picasso. But Picasso's formal innovation (and the formal innovation of those that followed) is supposed to have freed us, not stifled us.

One of the things that attracts me to comics, is that formal progressiveness is a sideshow to the main event--comics as a literary form. A lot is being done formally with comics, but since comics is primarily a storytelling medium, it has more of a relationship to literature. The best part is: fine art academia still has no idea what to do with them.

One of my favorite cartoonists, Chris Ware, one of the most formally inventive cartoonists working today, was featured on the cover of Art in America a number of years ago, but since fine art academia tends to be naive about comics, they had no point of reference to discuss the formal invention in his work.

Robert Crumb is similarly celebrated by the fine art academic community, but in a similarly clueless way. They seem to know it's important, without quite knowing why. Comics, in the past two decades, as a form, have reached a kind of critical mass--there's too much being done of quality to ignore, and much of it, more for its subject matter than formal concerns, doesn't resemble what has been done before in the medium. Comics, at this point, is the last true visual art medium that is essentially bullet proof. Fine art academia simply doesn't know where to begin to discuss what is, and isn't formally progressive about comics. At least not yet. And even when they do, comics are so tied in to literature, there's no separating what we value in the novel, from what we value in the "graphic novel" (a term I loathe that we're pretty much stuck with at this point).

Comics: The Last Vestige of Modernism in a Post-Modern World

Chris Ware: fine art academics still don't know quite what to do with this. 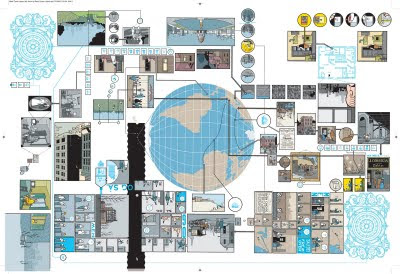 Comics, aside from those that are technology based, is the youngest of all contemporary mediums. It Is the last contemporary form to be developed that involves the direct application of the human hand, a 2D medium that stands on the foundation of the complete history of painting, mark making, and symbol making, applied to storytelling in a truly unique way.

Though it is an arguable point, the medium of comics as we know it today, was developed at the early turn of the century. When the first long-form comic or graphic novel was developed is another arguable point, but the proliferation of the long-form comic, or at least, comics that were not first serialized as strips or magazines, essentially emerged in the later half of the 20th century.

The assumption is that everything that is done in contemporary media and art is post-modern by default. This is essentially true, but what is progressive in comics formally has more of a relationship to modernism than post-modernism. The formal inventions in comics involve signs and signifiers in a way that is not by design, self-referential. It is invention that comes from necessity in the same way as the progressiveness that occurred in painting in the first half of the twentieth century. Formal progressiveness in painting occurred through a practical exploration of the process of painting. Formal progressiveness in comics comes from a practical exploration of the process of visual storytelling. And while there is still a lot to be explored formally in technology based mediums, comics is the last new medium that involves the direct application of marks to paper, that last new medium in which anyone with the most basic tools, can create.

Edit: I recently added two check boxes below each post, "more posts like this" and "less posts like this". The idea is to get a sense of what people like to read on my blog, without their having to make a comment. Though I do get stats on how many people view the blog, I have no other way to gauge peoples interest besides numbers, so do check a box, even if it's "less posts like this". Maybe you want more art, and less jabber? Maybe more jabber and less art? Or jabber and art? You tell me!
Posted by Jed Alexander at 3:37 AM