Some Husky Drawings, Research and Character: You Don't Always Have to Write What You Know

Edit: I changed the title of this blog post because it didn't entirely make sense. 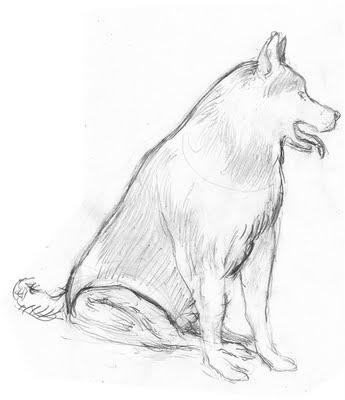 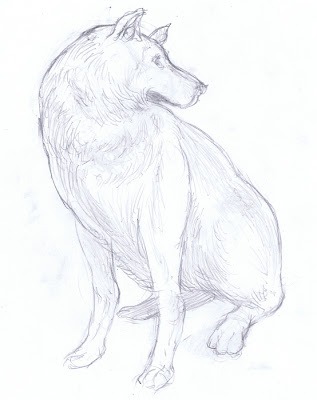 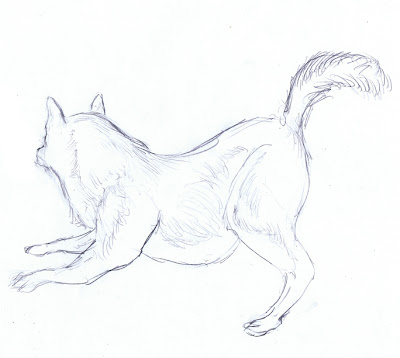 When I have multiple animals to draw like this I like to give myself plenty to choose from, and the more I draw them, of course, the better I get at understanding their anatomy. We have a Doberman and Australian Shepard mix named Cinder, a really beautiful animal with a pattern of spots something like you'd find on a hyena. We often get compliments because her coat is so unusual. She's perhaps the sweetest dog we've ever owned, and though she loves affection, fortunately when left to her own devices she's very good at entertaining herself, so she's not overly dependent. She's a little timid around strangers though.

Reg and I were playing with her last night, and Reg thought that there might be something wrong with Cinder because of the way I was looking at her. I kept looking at her legs and haunches, moving her around so I could get a closer look. I couldn't help myself! When drawing a new animal, it doesn't hurt to have one in the house. Though she's not a husky, her basic anatomy is the same. Usually I'm not so lucky. As yet I haven't been able to locate any eagles or elephants that were available to model for me. My usual technique is to use multiple photographs and draw from them until I've figured out the animals anatomy as best I can. I also have a couple of great reference books on animal anatomy that come in handy.

I love drawing animals but they're always a challenge. The recent seal drawing was particularly hard--trying to give it a sense of movement when its essentially a big thick teardrop with a face on the end didn't help. Harp seals have short flippers and don't have as much articulation in their necks as other seals, so most of the movement is in the lower body. I was able to give it a nice S-curve and a dramatic expression, so I think it ended up being pretty effective.

This is my second series of illustrations for Cricket magazine, and I find myself envying my friend Kris Mcleod, another local Davis artist and frequent contributor to Ladybug, Cricket's sister publication. Kris gets to draw kids and snowmen, while I get these assignments that require tons of research! Animals and period costumes and unique habitats all have to be on target. It isn't fair! But I can't complain too much. One thing I like about illustration, and also fiction writing, is that I always end up learning in the process.

You Don't Always Have to Write What You Know

In fiction, they always say, "write what you know", but what you don't have to limit what you know to your personal experience. You always approach your writing with your own unique perspective, but it doesn't hurt to enrich your writing with a little research. I think it's the same with illustration. Working as a professional illustrator or writer, after a while, making pictures and writing stories becomes your main occupation, so if you were to literally "write what you know" you'd end up writing a less than scintillating story about someone who spends most of their time writing and drawing pictures. That's when it's time to step out of yourself and learn something new.

When writing about a teenage girl, I watched hundreds of video blog entries on Youtube made by teenage girls, to get a sense of the phrasing and rhythm of their speech and to understand a little more about how they think. There's always a little bit of your own voice in every character you write, but putting yourself in another persons head, particularly someone of another gender, requires you to inflect that voice in a way that makes sense for the character. Teenage girls not only speak differently than me, but they also see things differently than me. I once heard the actor Ryan Gosling say that when he acted, if he could allow his body to become the character, his head would follow. Getting a sense of the physicality of the character allowed him to become the character. In writing, when I find the voice of the character, their attitude and unique perspective will follow. It's a very intuitive and unscientific process, but somehow it works out.

Getting Out of Your Own Way

The magic of art making is in this process of identifying with people and objects in a unique way. In drawing its the form and contours of an object or person or animal or landscape. You may never touch an elephant, but you can still draw an elephant. You can't hold a landscape in your hand, but you can get a sense of it's character and shape, and do the best you can to translate that to the page. In writing, similarly, you must try to get a sense of the character of your subject, and translate this to the page in the best way you can. Of course, you're never going to do this perfectly, and you'll always be instilling your art with an aspect of yourself. In this way, it becomes a collaboration between you and your subject. Even if that subject is yourself, the process of writing about yourself allows you to discover aspects of yourself that you didn't know before. Similarly, drawing a subject allows you to discover aspects of that subject that you didn't know before.

You have to be able to get out of your own way, to find the subject instead of trying to impose yourself upon it. You're not shaping it. You're not creating it. You become a vehicle for the expression of the thing. You become its instrument. Most of the time our ego gets in the way of doing this effectively, and there are plenty of egotistical artists, but when they're making art, if they're effective, they can only congratulate themselves after the fact. The intuitive and very non-rational process of making the thing is imperfect, is frequently interrupted, but when it's working, it has a life of its own. Your conscious and rational self might convince you that you created it out of whole cloth, but a part of you, no matter how deeply sublimated, will always know better.

When I've made something that really sings, it feels like I had nothing to do with it. Taking credit for it feels like I'm getting away with something. Most often I get this feeling when I've made one of those rare pieces that feels like one big unrepeatable accident. That's when it feels like I'm getting away with something the most, and when people compliment me on it, I often think, "but they don't know what a fraud I am. I practically had nothing to do with it." When this happens, I feel like my work is the most successful. I feel like I've plagiarized nature. Its always an imperfect copy, but it's close enough to resonate with my audience and for them to recognize themselves in it. Then the audience becomes another collaborator, and they add their own unique perspective into the mix. That perspective may be entirely different than yours, but you can't fully own something after you make it. It's hard not to want to lay claim to it, hard not to feel that you've been misunderstood when other people don't see it as you do. Maybe their view of it has such disparity from your intention, that you feel they've missed what's in the work that has value. Maybe they've allowed their own egos to get in the way of fully appreciating and understanding the work. But you can't control that. It's part of the collaborative process. But then, it's always nice to have collaborators that are little more sympathetic to your unique point of view.
Posted by Jed Alexander at 2:51 AM