Here's another character design for my beginning reader book in progress. 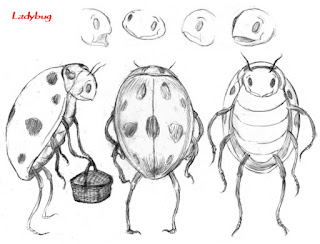 I have to say, there is a fine line, when anthropomorphizing insects, between creepy and cute. It took about a week to resolve these two designs so that I was happy with them. There's no telling how many times I'll have to draw these guys, so I took my time getting it right.

Someone on Google+ asked me about my process in designing a character, and this was what I answered:

Thanks! Well, looking at pictures of beetles, of course, looking at pictures of dapper gentleman, looking a little bit at illustrators from the past, like Grandville and Beatrix Potter, and just trying to give the drawing life and character. My object was to make it not too anthropomorphic, but not too creepily insect-like. I wanted to do something that didn't look like "A Bug's Life," but also didn't quite look as realistic as Grandville. So I suppose figuring out what I didn't want to do was as important as figuring out what I did want to do. I wanted it to have as much real bug anatomy as I could get away with while still keeping him relatable.

The best way, I think, is not to think too much about what other people have done--it's good to look at other people's work, but you have to think about who the character is. In this case he's a polite, dapper, old fashioned guy. There's a sweetness to him as well. When he starts resembling that guy, you're on the right track. Just trying to come up with a cool looking character will probably lead you down the wrong path. Sometimes you get so caught up in making the character look cool, or cute, or whatever, that you forget to make it human. Don't forget who the character is. If you start thinking about other people's characters you're going to draw their character instead of your own. But that's essentially what I keep asking myself--does he look like he could be this guy? What would make him look more like the guy in the story?

Edit: Description of character is for the character is the previous post, as I was addressing an earlier comment.

Posted by Jed Alexander at 7:15 AM