Another Easter Girl, Using the Computer as a Compositional Tool

Here's another Easter girl, inks for a new image I'm working on. In another one of those painful cropping decisions, this one got cropped out at the waist, so this will be my only opportunity to show off her pretty braids.. 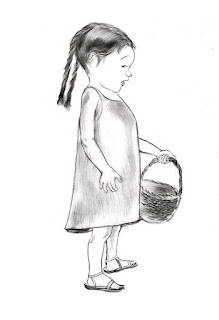 The Computer as Compositional Tool

With some of these self motivated pieces my initial plan for the composition is a little buttery. I have a basic idea, but then after I ink the figures I start moving them around to see if they fit in better places than where I had originally planned them. This was one of those cases. It requires a bit more work, since I'm cropping out parts of the figures that I wouldn't have had to ink with better planning, but it's a process I enjoy when time allows. Often it provides new discoveries and new possibilities that wouldn't have occurred to me in the initial thumbnail stage. Of course, this is no way to work on deadline or in a collaboration, but it's one advantage that the computer allows with self-motivated work.

Often when people refer to the computer as a drawing and painting tool, they don't mention how much of an amazing compositional tool it can be. Moving stuff around, cropping, taking risks on a whim that you wouldn't be able to do with traditional media. When I fully render a figure like this that may or may not be cropped, or even omitted from the composition altogether--I get to act as a kind of studio photographer.  When figures are rendered, they don't always have the same character as your sketches.You may lose some of the freshness of original sketch, or you may discover something new, but the composition itself can be another opportunity to add a fresh an spontaneous approach to the image.

Of course, there are limits, and it's important to make sure the figures work in the perspective I've created--you do want to make sure their feet are planted in the right place! Since it isn't an actual three dimensional space, but an illusionary one, the figures do have to line up with vanishing points, though sometimes you can even adjust for this. Otherwise, I can move them around, or crop them freely, if within reason. But again, its not a chess board, and it's not stage direction. You don't want your picture to look like it's composed of paper dolls. If you really have to and it's of genuine benefit to the image, redraw the figure to fit the image! I know it's a bit of a backward approach, but this is, of course, only for when you're on your own agenda and time allows.

So when I finish this piece in the next day or two, you'll see where this one ended up, just one of many figures that did a lot of moving around on the picture plane before I was satisfied, since the picture plane--a horizonless field of grass--gives me more flexibility than usual with perspective.

Posted by Jed Alexander at 6:28 AM