Me and Moebius, San Diego Comicon Circa 1987!

Now it can be told. 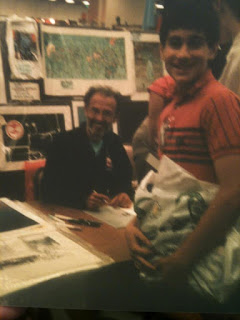 So here I am at 13, having my first  nerdgasm, getting my copy of Upon a Star autographed by none other than the late great Jean Giraud, AKA Moebius! Photo courtesy of Josh's mom.

So lets see: it looks like a plate from the now extremely rare City of Fire portfolio Moebius did with then unknown, Geof Darrow is hanging behind him. Wish I bought that. You might be able to get it for a grand now on E-bay. I don't remember him having a beard. Look at those jacked up bangs! Clearly my mom cut my hair. Couldn't she have sprung for Supercuts?  The knit shirt and likely, corduroy pants were typical of my attire of that era. To think that I would have been a hipster if I looked this way in the late 90s. I imagine my much more fashion savvy friend Josh wore feathered hair, jeans and a Cramps t-shirt, so my look does seem to have weathered the years a little better than his.  What cruel, cruel irony. Girls always liked Josh. I remember then being fond of the Paul McCartney and Michael Jackson song, "Say,Say, Say," if that gives you any indication of my musical tastes. Josh liked The Cramps and Stray Cats. At the time, Josh was developmentally about 18, and I was about 8. Together we made one 13 year old kid.

That was back when Comicon was for the most part actually about comics, and maybe a little sci-fi. In fact, speaking of sci-fi I remember seeing Walter Koenig AKA Chekov from Star Trek in the hallway. I pointed at him and said like a huge spaz, "It's Walter Koenig! It's Walter Koenig!" He turned around, looked at me and said, "Stop pointing at me, it's annoying," before turning his back on me and walking away. I felt completely deflated. I loved Star Trek. It was before all those other Star Treks so to the Trekkies, he still ranked high in the pantheon, and Comicon was their temple of worship. But Josh was less impressed. He said, "What a dick. He should be glad you even know his name," which made me feel a little better. He should have, dammit! I  even pronounced it correctly! Moebius, on the contrary, was extremely polite, and accepted my spazziness with grace.

Moebius was the highlight of my trip, and eclipses all the other guests in my memory, but I do still have the program somewhere and recall a few others, like Kirby and Eisner and good old Stan Lee. I did wait in line to see Stan Lee, but by then, it was already starting to be popularly recognized that Lee had unfairly taken the lion's share of the credit, so he had already lost a bit of his shininess in my eyes. Still, Lee was the definition of avuncular if ever there was one, and you can't help loving the guy. He has this art of talking to everyone in this intimate, just you and me, kid, way. One of the dealers had given me their 70s copy of Bring on The Bad Guys to have signed by him, and I remember in exchange for the favor, the dealer gave me a copy of any comic I wanted on his table. I chose this book called "Ex-Mutants" an X-menish knock-off drawn by future 90s fan favorite Ron Lim, for anyone keeping score. What's Ron Lim doing these days?

Oh, there was Paul Chadwick somewhere in there, and I was just starting to become a fan of Concrete. Somehow I seemed to miss a lot of the other big personalities. This wasn't the Comicon of today, so what I mean by "big personalities" was Sergio Aragones, not Quentin Tarantino. You also didn't run into quite so many Stormtroopers. There were costumes, but costumes weren't as much the thing. It was mostly lots and lots of comics nerds, and meeting the artists and buying back issues was our main objective. That was before E-bay, so comics conventions were the best places to find those rare books you were looking for. But I did discover and fall in love with Jan Strnad and Dennis Fujitake's Dalgoda, with very Moebiusesque art by Fujitake, but something was lost when the series went into outer space with issue 2. That first well worn double-sized issue is one I still treasure, and there also that great looking Kevin Nowlan back-up that still looks pretty gorgeous. I got Ted Mckeever's first book, Eddy Current. I remember talking to Paul Kupperberg for at least an hour, because he was one of the few guys who was willing to talk to me, even though I hadn't read anything he had ever written. But then, not many people were coming to his table, which was a little sad. I mean, he'd written quite a few comics for DC. But I nerdgress...

Aren't you never supposed to write, "in conclusion in your conclusion? So I still have my Moebius-signed copy of Upon a Star. It's pretty beat-up, and it's got a big ink stain on it from sitting on my drawing board so much while I was trying to learn how to draw. Josh used to always give me a hard time about how I treated my comics--I had lowered their precious "mint" status to something below "fine" or worse, and they would surely fail to increase in value. Little did he know that most of the 80s comics we bought back then can be foundon e-bay for about the same price we paid for them then. In fact, I've bought back a number of the comics I got rid of  back in the 90s, after college. I'm still buying 80s comics that I felt like I missed out on, Like Aztec Ace and everything published by PC unless it was by Neil Adams, with the exception of the so bad it's brilliant Skateman.

After about 18 years I caught up with Josh again recently at a coffee shop. He brought his 15 year old kid, who had inherited Josh's maturity, if not his worldliness. I always liked his parents His dad was this amazing sculptor.And I still love Moebius, who died before he really was supposed to, which I still think is unfair. Thanks Mia, for the great photo! Oh the memories...

Posted by Jed Alexander at 6:08 AM