Ladybug and Gentleman Beetle: The Lay of the Land

I originally meant to do some sort of map in the end papers of the book, but my agent suggested some kind of establishing shot on the first page. I think it turned out to be a very good idea, really giving the reader a sense of place before we delve into the story. Here's the rough for the dummy (later to be inked and colored): 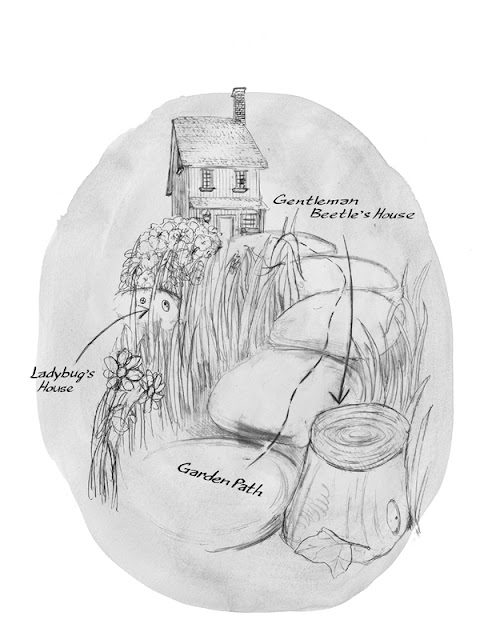 The perspective is, of course, deliberately exaggerated. If this were accurate the house would be birdhouse sized. The idea was to make sure that the reader could see the tiny homes of Ladybug and Gentleman Beetle and show the house in the background without the details being dwarfed by the scale of the house. I think this forced perspective has a nice whimsical look.

I wanted to avoid too quaint a cottage, and too perfect a garden. This garden reminds me more of the kind of garden my grandmother kept. A little unkempt, but not to the degree of being neglected. This mirrors, in some ways the world of the characters--in the tradition of Beatrice Potter, they live a genteel life in their homes, while the world at large has it's natural dangers.

Criticism so far is that this is a "quiet" or "soft" story--I don't want to risk being any more specific than that since these comments were made in confidence--which basically means there's not a lot of action. I understand the appeal of a book with more obvious drama, and maybe a book like that catches the reader in a more immediate way, but my hope is that there's room for quiet stories a well. Some of my favorite stories have been quiet ones.

In general, comments have been positive, particularly about the art style, which is encouraging.

The submission process has just begun, so wish me luck!
Posted by Jed Alexander at 7:36 AM