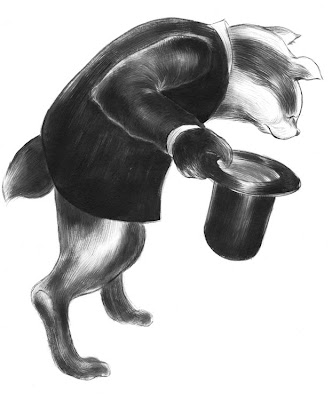 Changed this guy a little, from beckoning to bowing. It made more sense in the context of the image. This, again, is part of the same scene as earlier.

I've always been timid with spotting blacks, so I've found that drawing this in brown ink and then turning it black kind of fools me into thinking I'm not committing to such heavy blacks. Changing the brown to black on photoshop has a dramatic impact and I'm really enjoying seeing the results.

Learning to Keep Yourself Entertained While Working

Working piecemeal as I do provides a similar surprising result as I compose all the separate pieces into one image, and these kind of immediate (or at least, seemingly immediate) rewards help push me forward. It gives the illusion that it's all magically gone from a bunch of disparate images to one picture, instead of slowly building up over time. It helps too, when each figure or element becomes a little victory as its completed, each a self contained little drawing.

Finding little ways like this to motivate yourself can really help when you consider the long and solitary hours required to make pictures. The main source of satisfaction has to come from you. The occasional positive remark from an art director, individual or peer can be a boost, but other people's compliments aren't going to sustain you. You need to take joy in the process or it's simply not worth it. You have to learn to be comfortable with your own company and take joy from accomplishments independent of your eventual audience. You might make pictures in part, for an audience, but the most enduring audience you have is yourself, so it's important to learn to keep yourself entertained. There will always be aspects of your work that will be a chore, but the more pleasurable you can make it for yourself, the more prolific you'll be.Distractions and interruptions can be the hardest things to overcome, and I still struggle with them, the internet principal among them. The best way to overcome distractions is to get so involved in what you're doing that all distractions fade away, and the best way to do that is to enjoy what you're doing.

And speaking of keeping yourself entertained, audiobooks have been a real motivator as well. More than music, I find that audiobooks really help me stay involved. I know some people find audiobooks a distraction, but for me they've been just the opposite. Sometimes hearing what's going to happen next in the book can get me over the hurdle of one of the most difficult things that all work requires: getting started. If you can find a good way to get started, whether it's routine, or audiobooks, or your next coffee break, use whatever you can to keep you on task. 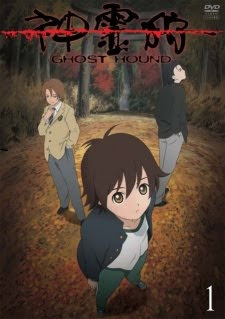 Just started watching "Ghost Hound" streaming on Netflix. This counts among the very few anime series I enjoy, including, most recently, Mushishi. It's by Masamune Shirow, most famous for Ghost in the Shell (and there's a scene with an ridiculously buxom doctor to remind us that it's Shirow), which made me a little apprehensive, and the protagonists are a little caricatured, but there are some great scenes where they travel outside of their bodies in their sleep and have encounters with these metaphysical spirits that are odd and beautiful in a very Japanese way. It's flawed, but still worth watching, and one of those rare anime that doesn't involve robots or extended fighting scenes. It's got a very slow, deliberate pace, with a little pop psychology thrown in the mix as the main character makes frequent visits to a psychotherapist. It's no Mushishi, and there are the usual elements of anime cheese, but it's an intriguing premise.

Watching this, I can't help thinking of what's happening in Japan right now, and how overwhelming its been to see the devastation in the news lately. It's hard to fathom the real meaning of what we've been seeing, just what a toll the Tsunami has taken on the country. It's easy to get jaded with as much as we're exposed to on the news, but this has affected me in a way that few tragedies in recent months, have. Some of favorite artists come from Japan: print makers like Hokusai, cartoonists and animators like Tezuka and Myazaki and writers like Haruki Murakami, just to name a few. It's a very rich and unique culture that I've long had affection for. Reg and I have discussed making a donation of some kind, possibly to the Red Cross, and I encourage others to do so as well if you can afford to.
Posted by Jed Alexander at 3:29 AM