Here's a rough sketch of another animal figure for one of the two illustrations I'm working on right now. 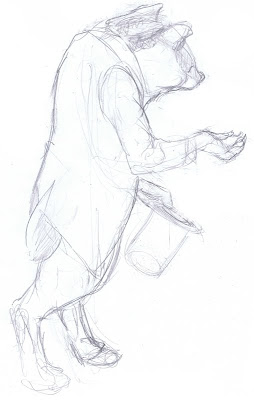 Anthropomorphic figures are tricky--I want some sense of the animals true anatomy, rather than simply a human with an animal head.Both Shepard' and Suydam's versions of Wind and The Willows, and of course, Beatrice Potter are inspirations.

I've also been working on a little girl figure for this one. It's hard to get a nice organic pose, and I'm still struggling with drawing kids. Some day i hope it will get easier. Lately I've been spending days trying to work out these figures. Expression is particularly difficult with kids In general I've been really laboring over these two illustrations.
Posted by Jed Alexander at 6:30 AM