I forget the name of this one, but it's going to be part of a larger dinosaur-themed image. Dinosaurs are harder to draw than I thought--the anatomy is just so odd. There's a little bit of bird, and little bit of frog, something horse-like and marsupialish, and just a touch of lizard. Surprisingly, they're less like a lizard than you would think. Why it took so long for them to figure out that birds descended from dinosaurs, I have no idea.

For a number of reasons, I wasn't drawing as much as I would have liked in these last three months, but now I'm back to my everyday habit, so I'll be posting more regular updates, if not daily, than close to it. 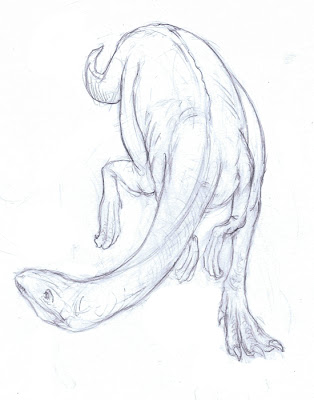 Posted by Jed Alexander at 5:28 AM