Another dino from another toy I got in the dollar section at Target. Again, kind of elaborated on the anatomy a little. 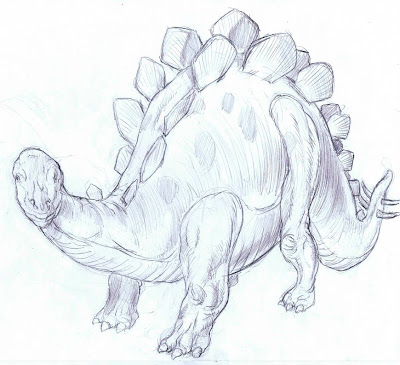 The anatomy of vertebrates is all pretty similar, and those squat legs in the foreground are very elephant-like, the skull sort of like a cow or a dog (actually I probably got that part wrong), as are the back legs. Or at least that's my interpretation. Once again I have no idea what kind of dinosaur this is meant to resemble. Drawn while watching the new BBC Dirk Gently's Holistic Detective Agency BBC show. Reg and I both read the books (though I haven't read them since I was 13) and I really dug it. Hope they make it into a series.
Posted by Jed Alexander at 6:16 AM