So Just What Is That Mysterious Mystery Project That I keep Talking About?

In the last couple of months I've been working with an amazing editor named Abigail Samoan to create interior illustrations for a YA book for Tricycle Press about a boy who writes letters to his dead father, and how his father eventually starts writing back from purgatory. It's a great book, but unfortunately, just a few weeks ago, Tricycle Press was shuttered by Random House. The fate of the book is still in question. It may end up going to another imprint at Random House, and that editor may or may not decide to use me as an illustrator. They may decide to use no illustrations at all. It's been a long frustrating ride, but Abigail has been very encouraging and positive about the work I've done and I've really enjoyed being involved. I wish nothing but the best for Abigail and really hope that I can have the privilege of working with her again wherever she ends up.

Strangely enough, this is the second time this has happened! Shortly after I did the piece I did for Nickelodeon Magazine for Chris Duffy, Nick Mag was given the kibosh. A great art director, a great magazine, but at least I got my picture in under the wire and it did eventually see print. we'll see what happens with this one.

At any rate, here's one of the few illustrations for the book that I actually took to a finish. The original idea was for me to just do the drawings described as being drawn by the two protagonists in the book, but I thought it would add something to draw the images in context, in the spaces where they were drawn. 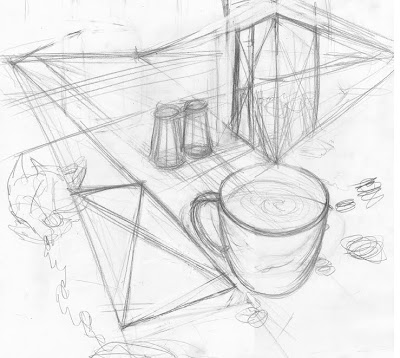 In the finish I used reference to get the details right and I cropped-in considerably, and there was a temptation to show EVERYTHING since I had done all that pretty perspective (check out that elipse!), a temptation best fought.

Here's the drawing. I had reference for the napkin, but drawing straight from the photo wasn't working out. I ended up idealizing the shape to give it more napkin-ness. I also took out the napkin holder--what that box was supposed to be--since it wasn't reading, cropped. 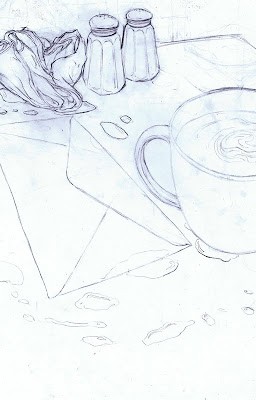 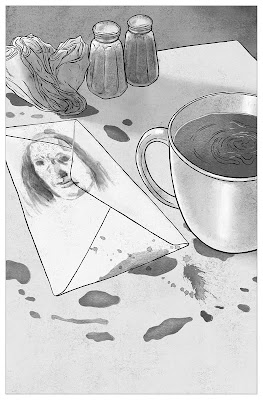 he idea is that the dad is in purgatory, and he's scrawled the face of this hideous looking wraith-like woman onto a envelope with coffee and a napkin. It isn't quite 100% plausible that the guy could paint something like this with a napkin, but you got to make things look just a little better than they would ordinarily to make it read and to get the point across. I did the face in ink wash and foreshortened it with the photoshop perspective tool which is really only good for foreshortening flat objects. The rest was done with watercolor and gouache textures cloned in on photoshop, line art done with a brush. Really pleased with that napkin!

We'll see what happens. I'd really love to illustrate the book.
Posted by Jed Alexander at 6:01 PM