The Pence bicycle show is up now, and will be up till the 15th. There will be a reception the evening of the 13th. The bicycle show is meant to celebrate the Amgen Tour of California as it makes its way through Davis. This is apparently a big deal, and Lance Armstrong will be in the race. I didn't know anything about Mr Armstrong until recently. What I've been able to gather is that he's won the Tour de France 6 times, and aside from having a really annoying website which is probably not his fault, he's a remarkable guy. He came back from a serious bout with cancer to win the Tour deFrance again, but I'm not sure which time that was.

The Pence will be selling my posters and prints. I have two pieces in the show.

I'm currently working on a new strip in collaboration with Tin Salmunic. I'm plotting, writing the dialogue and lettering, and he's doing everything else. At the age of 25, (he might be a little older by now, I'm not sure) he's done work for the likes of ESPN and Playboy and many others and teaches illustration in Virginia. he draws constantly as you will see if you check out his blog just about every other day. We're all of about 2 pages in, but Tin seems fired up about the strip and I'm optimistic about where we're headed with it. 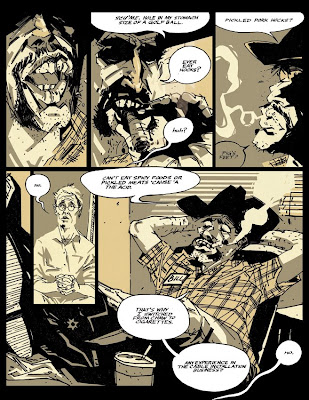 I set out the basic plot, plot a scene, Tin draws it, and then I put in the dialogue. It's a science fiction/humor sort of deal, nothing like what I've typically been involved in with comics. The feel is something between Vonnegut's Breakfast of Champions and Phillip K. Dick, and possibly a Coen brothers movie. I'm making up a lot of it as I go along, which is both exciting and frightening.

The art is still in progress. Because of recent responsibilities I've slowed down a little on my comics, but the new story will be up soon. I've also just started what I hope will be a new body of work, a series of landscape paintings with a rock and water theme. I'm working in acrylic and oil, so the style's a little different than what I've been doing before--it's probably closest to what I've done in watercolor, but more painterly, possibly less line oriented. I'll put some of that up soon as well.
Posted by Jed Alexander at 5:17 AM