So here's the image that I did for Nickelodeon Magazine for its special issue celebrating Spongebob Squarepants' 10th anniversary. They commissioned different artists to do their own interpretations of the characters, and after seeing my "Road to Oz" picture, the art director, Chris Duffy, asked me to interpret the characters as The Wizard of Oz characters.

Never having worked with licensed characters before, my first interpretation was a little bit conservative, and I made too much of an effort to stay "on model": 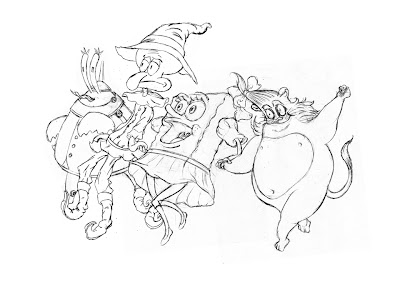 Then, when I realized that when Chris said "do your own interpretation" he actually meant it, I did this version: 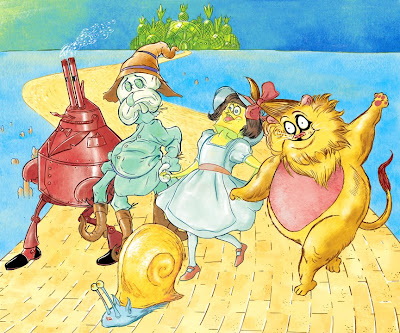 Chris was pleased, and the image will appear in the August issue, which is coming out sometime in late July. Chris is my favorite art director, not only because he was fun to work with, but because he's responsible for the amazing comics section of Nick Mag. He hires the best small press and alternative cartoonists in the business, people that you'd otherwise never suspect could do kid friendly material. This is what a good art director should be able to do: look beyond the obvious and have confidence that an artist can do work that isn't necessarily reflected in their portfolio, and allow them the freedom to do what they do best.

Unfortunately Nick Mag has ceased publication, which is a big loss to kid magazines in general. Nick mag was a welcome exception to the usual condescending kid magazine fare.The good news is that they'll be publishing through to December, so be sure to get the last remaining issues of the best kids magazine on the stands! And here's a link to the magazine's website:

I'm currently at work on a very large and detailed image inspired by a short story by Haruki Murakami from his anthology, "The Elephant Vanishes". I'll be posting it in a couple of weeks. Murakami's story describes a factory where elephants are manufactured, so I decided to draw what I think an elephant factory would look like.
Posted by Jed Alexander at 7:33 AM 4 comments

This is a comic I submitted to a kid's magazine. Unfortunately the magazine isn't accepting submissions at the moment. The magazine in question publishes some of the best comics for kids in the business, so it's pretty competitive.

Edit: The magazine in question was Nickelodeon magazine, for whom I did a recent illustration (August issue). Unfortunately Nickelodeon has been recently cancelled. It will be missed, as will the great work of Chris Duffy, the editor responsible for the deservedly celebrated comics section! I'll be posting the illustration I did for Nick Mag in late July when it should hit the stands.

At any rate, I'm looking for a home for this one, so if anyone knows or can suggest a kid's magazine that might be interested please let me know. 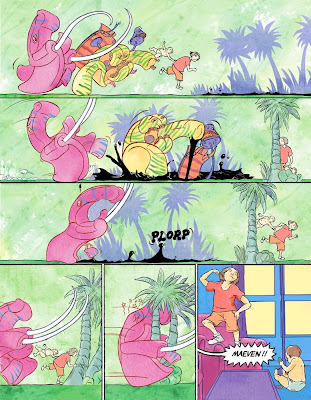 And here are some of the characters, inks and pencils.

Posted by Jed Alexander at 9:35 AM 2 comments