A portrait of our dog, Cinder, for my wife's Birthday! Happy birthday Regina! I love you so much! 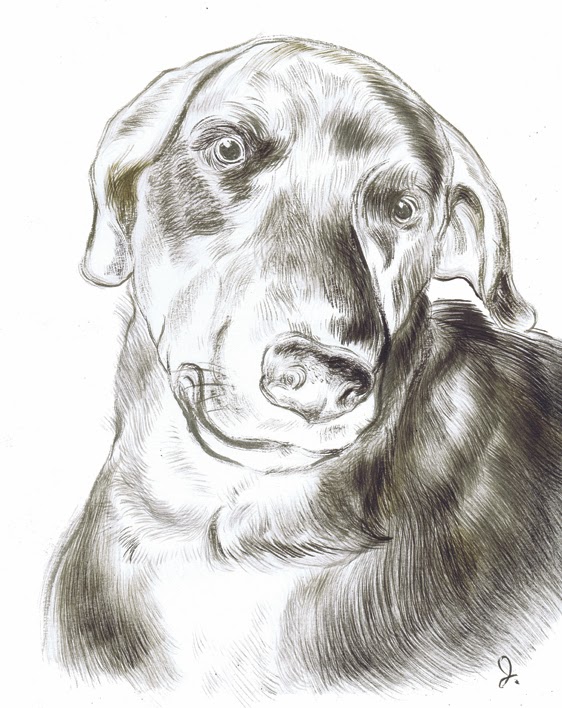 Posted by Jed Alexander at 7:41 AM 0 comments

For a work in progress.

Cow and Calf In 50s Attire 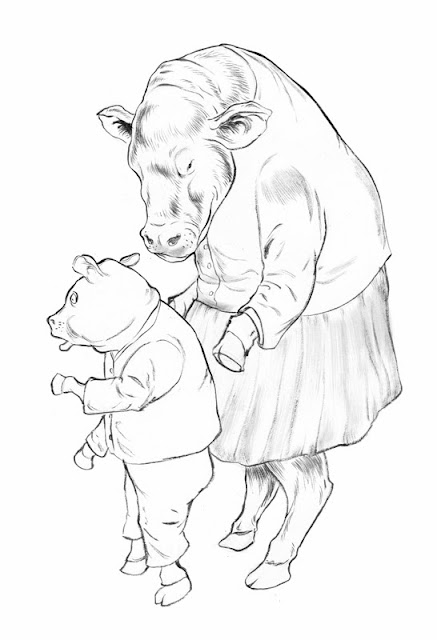 Another set of figures for my work in progress. I'm particularly happy with the feathering on the cow's head. 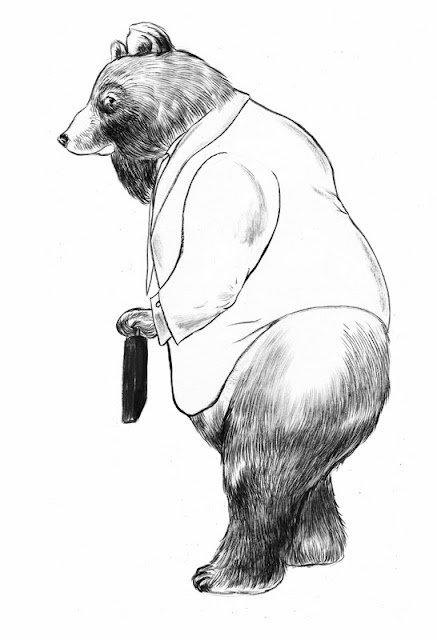 OK, I know that was a awful pun. Another image from my work in progress.

Cat for Work in Progress 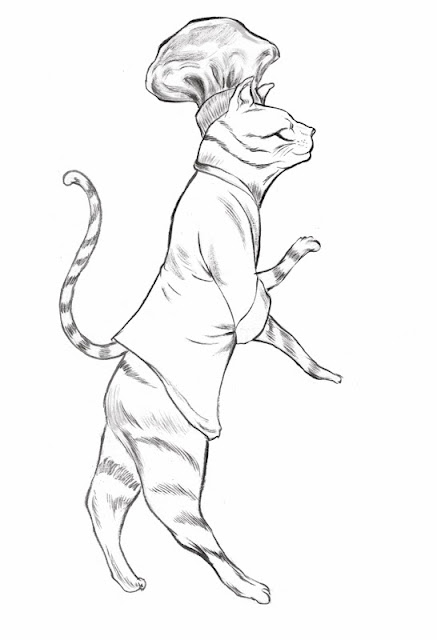 Sorry I haven't been posting much stuff. I've been too busy making it--I'm making a big bakery crowd scene and this is the cat who operates the cash register.

So, if you log onto your Iphone, go to the App Store and type in "Kickstarter" you will get this. At least for the time being.

I don't know how long it will last, but I declare this good! 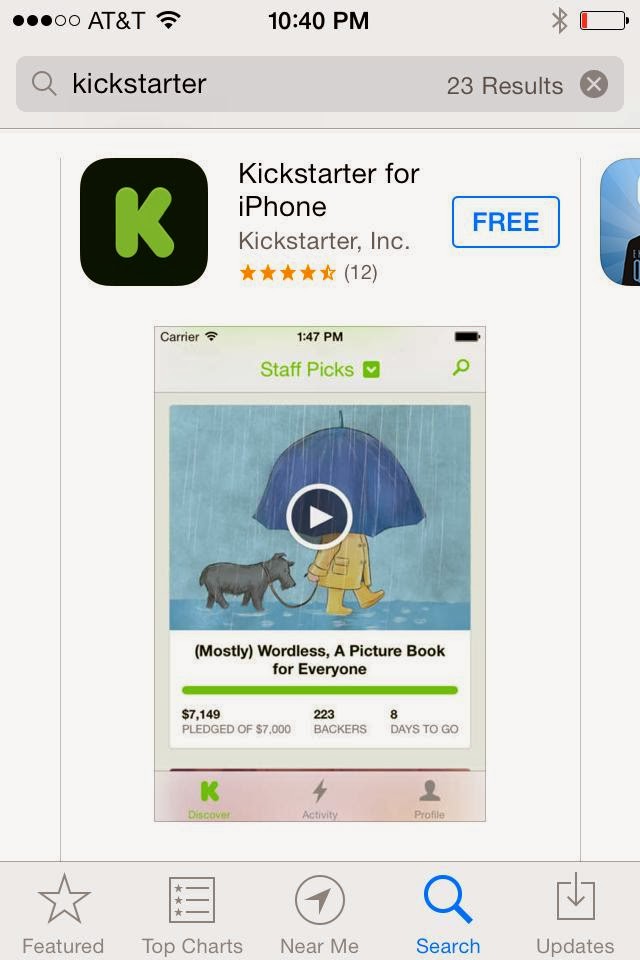 Posted by Jed Alexander at 8:09 AM 1 comments

My latest for Pyragraph about taking compliments gracefully. (I didn't choose the photo, by the way). You can read it:

here.
Posted by Jed Alexander at 9:11 AM 0 comments

Before I knew Joey Manley, I knew of him through his subscription web comic sites from the early to mid 2000s, Modern Tales, Girlamatic and Serializer which I subscribed to for a while. It was the most ambitious and successful web comics collective at the time. I was peripherally a part of the Bay Area comic’s scene, and Joey was hosting webcomics by a number of friends and people I admired, like Jason Shiga, Ben Catmull, Shannon Garrity, Tom Hart and Nick Bertozzi, names that are now well regarded in the alternative comic’s scene. Joey knew good comics, and this was work that wouldn’t be seen otherwise, anywhere. I remember Ben Catmull expressing his surprise to me when he got his first royalty check in the mail. He was actually making money making comics. It wasn’t a lot of money, but it was working. Joey’s site was a success. He’d given so many cartoonists an opportunity to share their work and make a profit from it, and he had discovered and believed in many others that no one would have otherwise known existed.

Some years later, my next contact with Joey was on Google+. Joey had posted the first chapter of his novel in progress, Snake Boy Meets Sky Prince. I usually don’t pay much attention to online fiction, but for some reason I read this and instantly fell in love with it. Right away you could see that Joey had come up with this fully realized, complex, idea rich world that he already knew very well. It reminded me a little bit of the work by Steve Moore or Tom Robbins (neither of whom, it turned out, Joey had read) with a touch of Kurt Vonnegut and Douglas Adams rolled in there too —hilariously funny, but at the same time genuinely affecting, Joey had his own unique voice. I let Joey know how much I enjoyed the piece, continued to follow subsequent chapters, and we began to have a dialogue. I began to follow Joey’s blog, and read and commented, and would occasionally get a little +1 of approval from Joey on some post I’d made on my own blog.

Soon after, Joey announced that he was starting a writing critique group under the name The Secret Writer’s Cabal, and I expressed that I wanted to join. I’d never been in a writing group before, and what I didn't know then was that  this was the beginning of the single most valuable writing experience I  had ever had. After a few fits and starts, a tight knit group of regulars began to form, a mutual admiration society of talented and insightful writers who made acute, and sometimes brutally honest observations about one another’s work as we watched our writing improve and grow in the process.We would have weekly video chat meetings where we got to get to know one another further, with Joey at the center, a natural leader and facilitator who brought his humor, intelligence and broad knowledge of literature to the table—Joey was well versed in everything from genre fiction to literary fiction, both classic and contemporary. Joey knew his stuff, and it was evident and obvious. He was also an amazing supporter of our work, and we were constantly inspired and looked forward to knew installments of Snake Boy Loves Sky Prince as we watched it evolve into something truly wonderful. He represented the best of us, and brought out the best in us, and my affection for Joey grew as the group endured.

Then Joey took a long hiatus from the group. He was sorely missed. He was having financial problems, and for this, and other reasons, he was stymied creatively. I continued to keep in touch with Joey, principally through Facebook as we talked about a variety of topics, particularly comics. It was fun to geek out with Joey about our mutual love for obscure comics from the past and gossip about comics creators. There are few people I could say, “Remember the story about Bob Kane and the clown paintings?” who were nerdy enough to know exactly what I was talking about, and I loved that about Joey. Our back and forth banter was always something to look forward to.

After Joey’s financial troubles began to abate, he returned to the group after his long absence. Joey had always been the glue, and we missed him, and we missed Snake Boy Loves Sky Prince, and Joey returned with a revived enthusiasm for his project which was apparent on the page.

Then Joey got sick. I don’t know all the details. It sounded like he wasn’t entirely sure what had hit him, but it had hit him hard. And I never realized just how sick he was. I never thought that the few, brief remarks he made on Facebook about his health were going to be the last I would hear from him.

Last night I had a dream with Joey in it. It’s not as though I dream about Joey every day, but he has at least on one other occasion turned up in my dreams. In that first dream, in that absurd logic of dreams, he was a kind of oracular archetype--he might have even had a turban--showing me the right path, which is, I’m sure, reflective in some way of how I saw him in our writing group.

But in last night's dream, we were headed to some kind of convention, maybe a comics or small press convention, I don’t know what, something I’d never had the opportunity to do with Joey—or talk to him in person for that matter—but in the dream I was on my way to some kind of event with Joey and a group of others I didn’t know. On the way, I lost sight of him somehow. I had a cell phone, but didn’t know his number, and I started to panic. I tried to call my wife to see if she had it.And then I woke up.

The next morning I turned on my computer and logged onto Facebook. The first thing I read was a post from a member of our writing group, Alexander Danner, announcing that Joey had died. I felt my heart drop. I couldn’t believe it. I logged into the Secret Writer’s Cabal website, and Janet Potts, another member of the group, confirmed it. Joey had died of pneumonia that night. (I should mention that the coincidence of the dream is an odd one, but I don't consider it anything more than that.)

Somehow I’ve made it to 40 years old and have been fortunate enough to have lost few people I care about, so the loss I felt at that moment was something I seldom experience. As my tears welled up, I felt this strange sensation of stepping outside of myself, wondering how much my grief was truly justified, how much I was truly entitled to it. After all, I’d never met Joey in person. I’ll never fully comprehend the loss and grief that his partner Joe Botts is experiencing right now, or what his family and close friends are going through at this moment.

But even though I never met him in person, I do consider Joey my friend. I’ll miss his voice. I’ll miss his words. I think about all that imagination, all those ideas, all that humor and insight and how it’s all gone now. We’ll never get to read the ending of Snake Boy Loves Sky Prince.

I recently used the crowdsourcing site, Kickstarter to raise money for a picture book I made. Joey kicked in a few bucks for a book. After it was successful, I sent out a questionnaire to my supporters. One of the questions was, “is there anyone you’d like the book to be inscribed to?”

Joey wrote in response, “inscribe it to me, silly.”

Maybe it’s a little maudlin, but reading that makes the tears come back all over again.

.
Joey Manley was my friend. And I miss him more than I can express.
Posted by Jed Alexander at 10:45 AM 4 comments

Another Article For Pyragraph!

Tripped (Or, One Trip to the ER Away from Food Stamps and Reality)

Here's the Link.
Posted by Jed Alexander at 9:39 AM 0 comments

Distorted Perspective: Not Following the Rules to the Letter

Here's an experiment in distorted perspective for a background for a work in progress, my version of The Gingerbread Man story. This was done by eye, with no rulers or curves or computers, aside from the Bakery sign, which was done using free-transform in photoshop. It's a technique inspired by Salgood Sam and Kim Jung Gi, two artists who excel at this kind of thing.

It's a technique often used in animation. Salgood as a great theory about this use of perspective involving how we see binocularly, and that one-point perspective is a composite illusion that doesn't necessarily reflect what we're actually seeing. Of course, this is much more exaggerated. 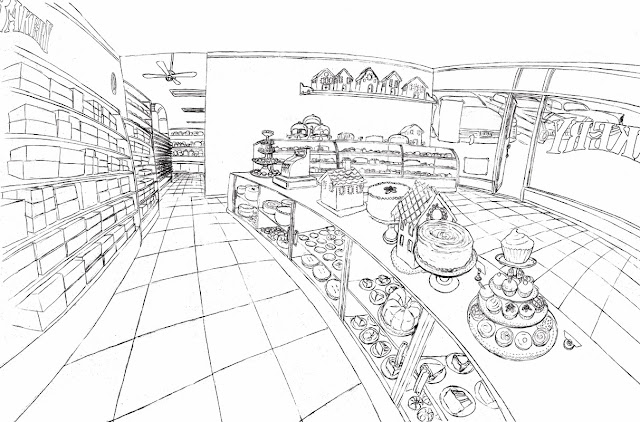 There are certain consistencies--the gridded floor follows a kind of contour, but there are multiple vanishing points going in multiple directions, with the landscape curving wherever I want it to accommodate the space. I wanted to squeeze as much as possible in the image as I could. This distortion also reflects the tone of the piece, a wonky doughy whimsical world with a lot of action and vitality.

In the past I've been very self-conscious about "getting it right." Now that I've figured out essentially how to do it right, I feel more comfortable veering off that path. Similar techniques are sometimes used in animation. As long as it all has its own internal logic and your distortions are purposeful and not accidental, there's a lot you can get away with.

Posted by Jed Alexander at 8:49 AM 0 comments