These are a couple of roughs for the current book dummy I'm working on. As mentioned, this one is very illustration intensive, so there's going to be a lot of these. The way a friend of mine once described how illustrations for book dummies were to be done, was to make sure it looks like you care, but not TOO much. 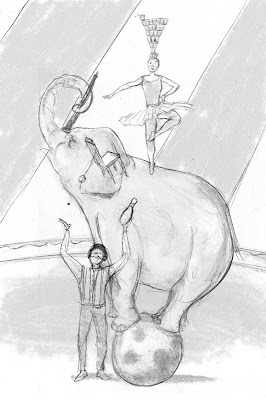 The reason for this is to make sure that the format looks flexible, so the illustrations don't look like you're too married to them. Illustrated books are a collaborative process, and for good reason: good publishers know how to put together good books. That means from top to bottom, from both a design and narrative sense. But then, all editors and designers aren't created equal, though if you're lucky, a good designer and editor will make your book better.

I've talked to a number of people who resist this idea, and I've heard more than one person say, "they were interested in publishing my book, but they wanted me to make too many changes", as if the idea of an editorial collaboration was a bad thing. If your editor isn't skilled, it may well be, but if you have a good editor and art director, you're all after the same aim: to make a better book, and its a process worth submitting yourself to. It's not as though great literature has never involved editorial direction, and it's a fantasy that all great artists work autonomously. Painters, for sure, but a book is a very complex vessel that involves many different elements. Architects need good contractors and builders, directors need good actors and cinematographers, and authors often need good editors. I've experienced this to some degree in the limited magazine writing I've done, and I've definitely experienced it with magazine illustration, so though I've yet to have a book published, I'm looking forward to the editorial process.

And here's a small spot illustration: 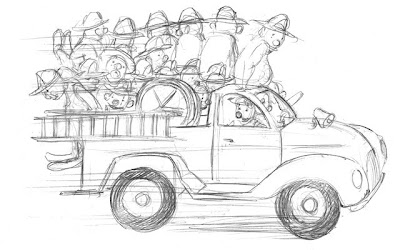 I was hoping for the opportunity to draw more crazy clowns, but this section of the book doesn't really justify it. For the benefit of the book, I have to fight my tendency and desire to illustrate everything. There's been a lot of shuffling of paragraphs and resizing of illustrations to make room for everything I need to make room for, but some illustrations have to be sacrificed. This format is both more flexible, and more complex than a picture book. Picture books generally have about 15 spreads, and you have to fit everything you need into those spreads, but with a chapter book as heavily illustrated as this one, it's important to arrange all the illustrations so the spreads and page turns work the way you want them to, which means a lot more spreads and page turns. Books like Diary of a Wimpy Kid, a great example of an illustration heavy YA book, demonstrate this dilemma pretty pointedly. The format demands a lot of planning and organization that I hadn't quite anticipated.

Back when I was a kid, good fantasy and science fiction simply wasn't written for children and young adults. One exception was Madeline L'engle's A Wrinkle in Time, which was written in the early 60s. Despite its age, the book still holds up surprisingly well and has dated very little. There was no precedent for it, and it was a long time before anything like it would follow. Recently, though, there's been a renaissance of YA and children's fantasy, a trend that began with the success of the Harry Potter and Twilight books, and it's a trend that I hope will continue. So here's a round-up of recent YA reads that I can recommend. I've listened to all of these on audio, since that's the easiest way for me to catch up on my reading while I work, and I tend to burn through a lot of them, but these are some of the better ones:

A darkly humorous, and generally dark book about organ harvesting. Very much a page turner, cleverly written. The science is a little iffy, but don't let that dissuade you. I'm currently listening to the first of Shusterman's Everlost series, and so far I'm really enjoying it.

The Maze Runner, and the Scorch Trials by James Dashner

The Maze Runner in particular is a great read, though with the Scorch Trials I'm afraid the series might be headed in the direction of the relentlessly bleak, and generally relentless Hunger Games. The Scorch Trials was enjoyable, but not quite as good.

This one is just a great s story about underwater settlements, with all kinds of maginative science fictiony touches, like glowing skin due to eating bioluminescent fish, and houses made of flexible material to accommodate sea currents. It delivers nicely on it's promise.

This one reminds me a little bit of a darker version of Dark Life. It has more of a bleak, post apocalyptic feel, but the writing and characters are very strong. I also recommend Bacigalupi's adult sci-fi novel, The Windup Girl.

A science fiction book about a girl who gets in an accident and has to deal with having a replacement robot body. A great book about body image that reminds me of Scott Westerfeld's Uglies series in theme, which I also recommend. This too, is a series, but i haven't listened to any of the others yet.

A more smartly written fantasy romance. The romance has an interesting twist, though like the typical love triangle, one of the love interests is a little too perfect. Still, it's a good answer to the much inferior Twilight. Romance is, I imagine, a difficult genre to write well, but this romance/fantasy hybrid accomplishes the feat pretty admirably. The protagonist sees fairies causing malicious mischief wherever she goes, but she and her grandmother are the only ones who can do this, and her grandmother warns her about revealing her secret. The fairies don't know that she can see them, and she has to pretend that she doesn't notice all the havoc they cause. It's a compelling and tense concept.

Let the Right One In by John Ajvide Lindqvist

The book that inspired the Swedish Movie and its U.S. remake, Let Me In. I haven't seen the remake, but the Swedish film is excellent and the book is even better. I'm not even sure this qualifies as YA since it deals with some pretty sophisticated adult concepts, but the protagonists are kids, and this one genuinely belongs in the realm of literature.

For younger readers, about an undead detective and his girl sidekick. Good fun told with humor and adventure, reminiscent of the equally excellent Artemis Fowl series in tone, and just as Irish.

Peeps, and The Last Days by Scott Westerfeld

Westerfeld books are almost guaranteed to be good reads, though these are my favorites. They're ostensibly vampire stories, but not really. It transcends the genre with both it's humor, and it's wonderfully realized idea of a vampire parasite that mirrors the behavior of genuine parasites in nature, and this becomes central to the story in a way that goes beyond the idea of a parasite as a simple device.

The Graveyard Book by Neil Gaiman

A book about a boy raised by ghosts in a graveyard. Like most of Gaiman this book relies heavily on white hats and black hats, and I tend to get tired of the two dimensional evil villain archetype, but the concept is otherwise nicely executed.

I may have mentioned this one before, but it's my favorite of the lot. Holly Black's Spiderwick Chronicles is also a good read, but this has Spiderwick and everything else on the list beat. Just read it.

That's it for now, but there are plenty more. There's just so many great books right now in the young adult fantasy market that are genuinely fun reads. I hope to do more YA round-ups in the future, so keep watching if this is something you're interested in.
Posted by Jed Alexander at 2:42 AM