Nailing Down a Character, Chomet's Illusionist

I don't think I realized it until recently, but I've been in a bit of a funk lately. I'm coming out of it now, so I'll try to post more, but it's put a small dent in my productivity.
At any rate, I've been designing this old woman character for the illustrated chapter book I'm working on. I've made dozens of drawings, a few represented in earlier posts. This is the first sketch where I thought I was starting to get somewhere. 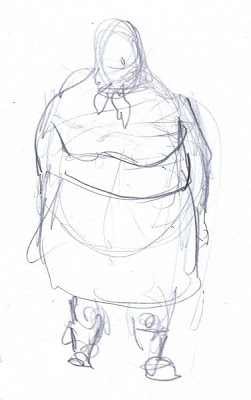 And here's where I feel like I nailed it. Not so much in the face on the left, but in the profile. 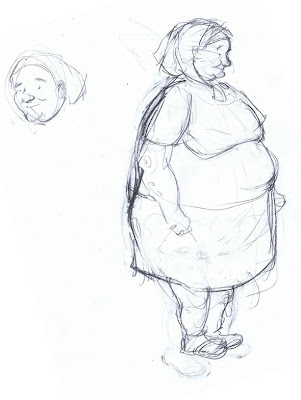 Sometimes a rough sketch can express something that you can't quite get across in a tighter one, so in this sketch I've tightened things up a little, popping the original sketch under the light box, but something was lost. I'll try to refer to the first sketch as I draw her, but this one was necessary to get a sense of her proportions. 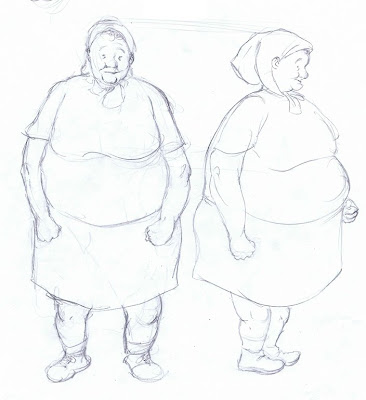 The character is physically and emotionally very strong despite her years, a real stalwart personality. I once saw a film about Georgia O'Keefe and watching her walk across the New Mexico landscape at 80 was impressive. At 80 she still looked like she could kick your ass if she wanted to. I wanted to give that sense with this character, with a strong center of gravity and her legs planted firmly on the ground. She's a bit of a gypsy, so I gave her a headscarf and used a lot of pictures of old Gypsy women and Eastern European women as reference, those old women that you know have worked hard their entire lives. She has prominent cheeks and chin to reflect that Eastern European matriarch look, and sensible shoes, probably sneakers.
I'm trying to be more conscientious with my character design than I have in the past, because sometimes I have a tendency not to stay "on model". Keeping in mind both a sense of the characters personality and her proportions should keep me better on track.
A great inspiration for character design has been the drawings of Chomet and Milt Kahl. Animation artists are some of the best at character design since they have to design their characters to move, and your character design has to be strong to sustain a wide range of movement.
The Illusionist 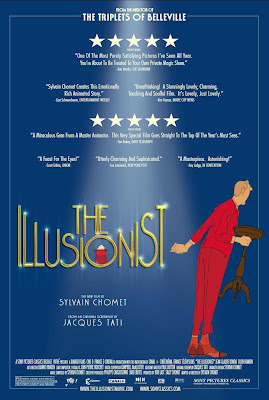 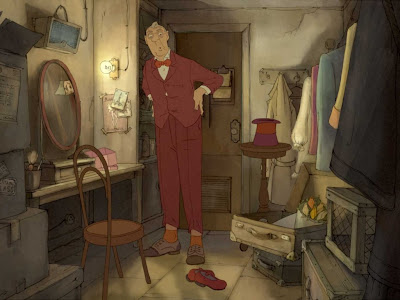 I had mixed feelings about the film--I loved Triplettes of Bellville, and I think Chomet is a real contemporary master of animation, the first 2D animator in a long while to match the best character animation of what I think is the highpoint for Disney for character, the 60s. This is the 101 Dalmatians and Jungle Book era, and even films like The Sword in the Stone have a character that I don't think has been matched in a very long while. Everything about the character animation and backgrounds is beautifully done. The color palette is a complex, muted spectrum of earth tones that you don't typically see in animation, and when you do see brilliant color, it has more impact than if you were in the saturated world of your typical CGI feature. The movie is practically silent, with characters occasionally speaking a mumbled imaginary version of English, and there's some wonderfully subtle physical humor.

The film is based on a screenplay by Jacques Tati, my favorite silent comedian, and Chomet captures the essence of Tati beautifully in the film. The script had been written by Tati in the 50s, and for whatever reason, he never produced it. Unfortunately I think it might have been because it's somewhat of a flawed and maudlin premise.

Tati's magician character performs in a Scottish village and a young woman becomes enamored of the idea that he can perform real magic after he notices that her shoes are worn and buys her new pair, making the new shoes seem to magically appear. She follows him to London and he takes her in, spending beyond his means to continue to enchant her with expensive luxuries. The young woman is not only childlike, but so naive she seems to be from another planet. She's not familiar with the basic value of money, for instance, attempting at one point to buy fancy jewelry with a low denomination coin. This character is the weakest part of the movie and is unfortunately central to the plot. It's a depiction of women in film that has a long history, the pretty young naive ingenue, and the part of the story that dates the most. Thankfully the film does not go into a romantic direction, or at least, the magician and the woman don't become romantically involved, but she does end up with a handsome archetype who appears to be much too sophisticated for someone so naive. His lack of a personality, in a way, makes up for the discrepancy, so this plot line ends up to be more empty than creepy.The handsome character amounts to nothing more than a plot device.

The story begins tragically as the magician finds that his talents are not appreciated, and as he struggles to get work as the story progresses from tragic to bleak. It's this romantic idea of artist as anachronism, and there's nothing more romantic than a tragic artist. This is where the story predictably spirals into a maudlin puddle. It's not as bad, in this regard, as Toy Story 3--though the emotional trajectory of the film is as obvious as a hammer, Chomet doesn't milk these emotional moments in quite so manipulative a way as Toy Story 3, and there is enough subtly and humanity in the characters for me not to feel completely betrayed by the story.

I consider this a stepping stone film for Chomet--the character animation has reached a new level of naturalism, and the story is well told and well paced despite being fundamentally flawed. Perhaps with the right story Chomet will reach a new high with his next film, so I'm looking forward to what he comes up with next. I still enjoyed The Illusionist, if for no other reason than the character animation. It's a subtly and grace that hasn't been seen in character animation in a very long time, particularly in 2D animation. 2D features have practically disappeared, but the French seem to be approaching the medium with strong craft and an original point of view with both Chomet's films and the recent and excellent animated adaptation of Persepolis.

Myazaki continues to be the best 2d animator in Japan, but his character animation is much more limited--it doesn't have the fluidity and nuance of Chomet. There's a cypher quality to the characters in Japanese animation since their expressions are limited by the default Tezuka inspired big eye style, a tendency that has plagued Japanese animation since its inception. At the same time, Myazaki's characters are strong on body language, his storytelling is superb, and the originality of the worlds he creates is singular. The most ideal scenario would be to have a film with the originality and storytelling of a Myazaki, and the character animation of Chomet, but maybe that's asking too much.
Posted by Jed Alexander at 12:57 AM