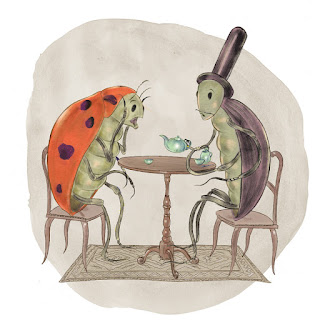 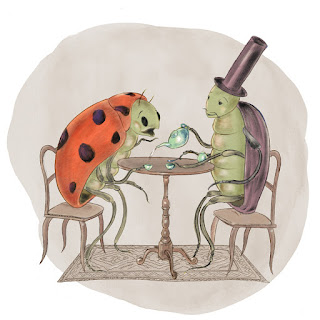 This is intended as an early reader book in the tradition of Frog and Toad Are Friends. I anticipate a lot of sequential action like this, scenes that really make the characters come to life and you can take advantage of some of the more subtle aspects of their expressions and body language. This is, in essence, comics to me, or at least, what I call comics.

Why I Don't Reuse Art Work

the furniture and rug are not reused artwork, but carefully light boxed and retraced. It's subtle,but I still think it has a different feel that people notice, at least on an unconscious level. I really like sequential action, where figures are moving in front of the same or a similar background as if in animation. You particularly used to see this in old newspaper strips. It can really bring the characters to life. Cutting and pasting a background or any repeated element outright is so easy now with the computer, but can really make the scene feel static. A lot of cartoonists I know who do small press comics are anal about this, and I used to fight it, but now I get it. No matter how precisely you duplicate the image, it's going to be just a little bit different, just enough for it to have a little bit of life. There is no good objective reason why this is better, but it works for me.

Why does this distinction matter? Illustration, by its nature, elaborates in some way on the text. In the early days, when manuscripts were decorated with images by the monks who hand copied the text, it was called "illumination," and I think in a different way, this is a very apt description of what good illustration is. It illuminates and brings out the text, rather than simply ornamenting it. But this isn't the same as sequential art. In sequential art the words and text are combined almost seamlessly to the point where the two are so closely associated that the images are the story. If the very nature of the way the story is told, of how the story is expressed through the images, make it hard to conceive of anyone else drawing it, that's as good a measure as any that it's sequential art.

Posted by Jed Alexander at 8:35 AM