So Duck Island, my Early Reader in progress, was lacking a certain amount of pizazz. I had thought of a lot of different ideas for what a duck civilization would look like, and everything I thought up was coming out Ewok Village. Then I thought: birdhouses! Then I thought: bird. houses (this is how literal-minded I am). Thus we have the new Duck Island: 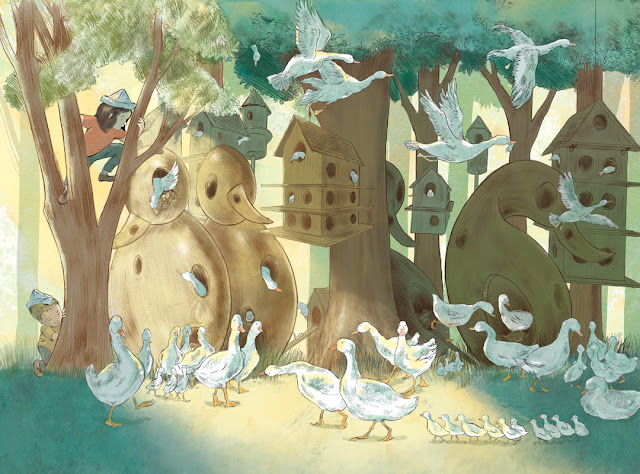 The first of what will be two spreads revealing the world of Duck Island. I think it lacks the ethereal quality of the earlier one but what it lacks in atmosphere it makes up for in style and contrast.

Here's the redone background in black and white, originally done in black ink and brown acrylic ink with drybrush and crowquil: 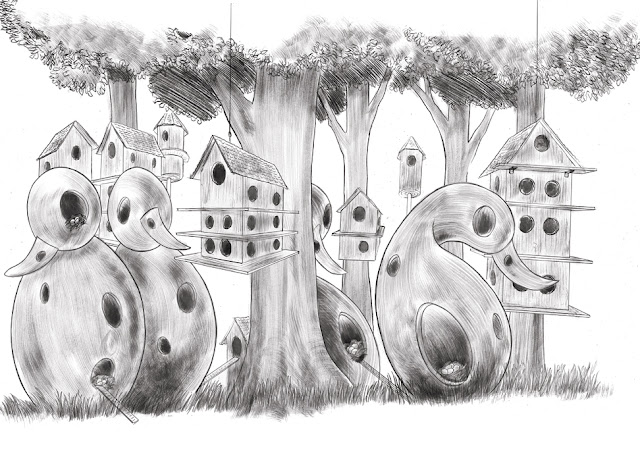 Why I inked and Assembled the Background in Multiple Parts.

It was done in three parts, then scanned and assembled. I drew everything together, then inked the trees, birdhouses and duck houses all separately on my lightbox. Why (you ask)? So I wouldn't have to do any masking. It requires more scanning, but the paper I like to work on can't tolerate adhesive or latex masking. It just tears it up. Also: I hate masking, and never manage to get the control I want. Somehow I always manage to miss an edge, and there's no going back!

It takes about an hour to scan and assemble the whole mess--each part also has to be put back together because the image area is bigger than my scanner--but it's worth it. Thus I don't have to worry about losing the fluid lines on the tree behind the birdhouse, or any other textures interrupted by other objects.