The Geese of Prospect Park 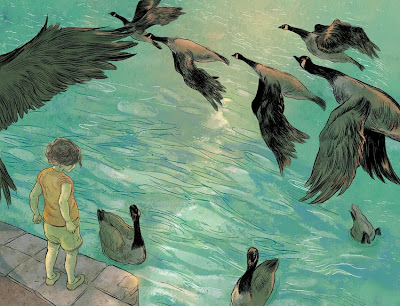 This image is based on a photograph (used with permission) that the very talented illustrator Danny Hellman posted on Facebook of his daughter Alice feeding geese in Prospect Park, geese that, unfortunately, no longer exist. The 250 geese that frequented Brooklyn's Prospect Park were tragically slaughtered by the Federal government because they apparently were thought to pose a risk to air traffic at JFK airport. More information can be found:

Danny's photos were amazing, a series of candid shots of his very charming daughter whom I wish I could have captured with a little more fidelity. My picture pales to Danny's. I found capturing the animation of Alice very difficult, so I went with a simple, more sedate pose, based on the photo that initially caught my attention. At some point I'd like to give drawing Alice another shot! She seems like a really fun Kid, and Danny's affection for her is very apparent in the photos.

Alice's pose was taken directly from the photograph, but the rest I invented or elaborated on using a variety of other sources.

I envisioned using this as a mailer, so at the front of the mailer would be this image, with room for my website and other information: 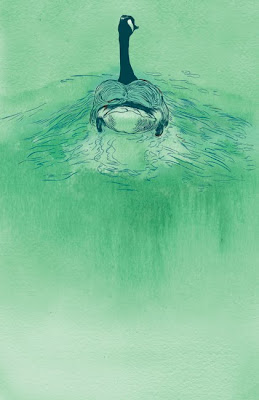 And last, here are some geese I didn't end up using, among them, some of my favorites, but they didn't end up working for the picture. Maybe I'll use them somewhere else some day. 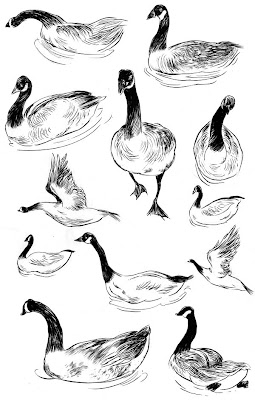 All of the images were done with my usual method, brush, ink and pen rendering, scanned and colored with watercolor textures. Here I experimented more with feathered brush strokes. By "feathering" I mean a parallel series of tapered brush strokes that have a nice, soft, modeling effect. Not always used for the rendering of actual feathers.

If you would like to see Danny's illustration work, check out his website, here.
Posted by Jed Alexander at 9:22 AM