Did these while watching Nicole Holofcener's Please Give, which was kind of a disappointment. 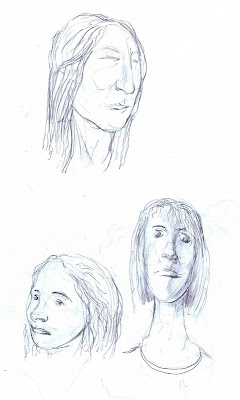 I really liked Holofcener's Lovely and Amazing, and she's given Catherine Keener some of her best roles (My unflattering Keener portrait is on the top left), but this one never quite came together. While Holofcener's films are usually very character rich The characters were never quite fully realized in this one. Keener's was the closest to a real person, but everyone else was kind of a 2 dimensional jerk. Then there was the granddaughter and her boyfriend who were two-dimensionally sweet. I did like the performance of the actress who played the Grandmother but there wasn't much to the character.

We saw Inception the previous night, and It was pretty awful. The overly convoluted premise that seemed to be the point of the movie didn't hold together even if you're willing to go with it--You can travel into peoples dreams with an unexplained gadget. Check. Your previous dreams continue to have continuity after you move onto another dream, or have a "dream within a dream"? Fine. That doesn't make a whole hell of a lot of sense, but then neither does much of the rest of the movie, which is mostly just one endless chase filled with gunfire and people whom I couldn't care less about. There was simply no sense of peril. Even in a James Bond movie where you know James Bond is never going to die I feel more suspense than this. I also don't think I've ever dreamed about having an automatic weapon but in this movie everyone seems to have one. You'd think they'd have a more imaginative way to hurt one another in a dream, like giant toenail clippers or something. Anything but automatic weapons. I could go on, but suffice it to say, the movie was horrible. Don't be fooled by the trailer. It's really really awful.

So it was a weekend of disappointing and crappy movies. The bee class went well though. There was a huge turn-out. I should be posting pictures of adorable children painting bees sometime soon. I tell you, you draw a picture of a bee with sneakers and say the word "butt" and it doesn't fail to entertain kids under 7.
Posted by Jed Alexander at 5:09 AM