Drawing a Fishing Boat: How Do You Draw a Machine When You Don't Know How It Works?

This is for the same project as the previous post.

When drawing a plausible boat or ship, it all comes down to this: you can't fake the rigging. 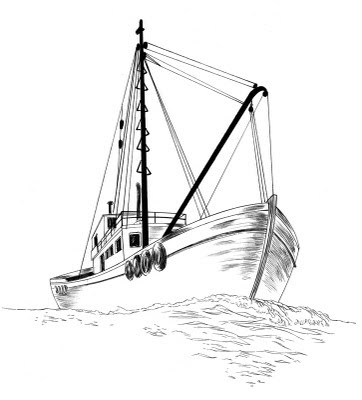 You can generalize it or simplify it, but just like bad anatomy, the viewer can spot if the mechanics don't look like they make sense. A fishing boat is the worst, because there are no sails. All those lines have something to do with hauling in a net, and there are a lot of them, more than I've pictured. In the front, what you can't see because of the angle is a kind of big spool, and I think the long arm there is what hauls in the net. While I don't understand everything at work here, I was able to distill the main components that I kept seeing in my reference.

So how do you draw a machine when you don't know how it works?

If you draw a lot, you probably do it all the time. You can draw a car without knowing how an engine works. You can draw all the appliances in a kitchen. A boat is no different.

This involves asking myself the same question I ask when I do any illustration: what's essential to telling the story. In this case it's a machine that has to look like it functions. That's all it has to do. I don't have to understand everything about a ship, but I do have to identify what makes it look like something that works to me.This is not a scientific process, but it's also not really as hard as it sounds. If you have enough reference from enough angles, you're going to keep seeing a lot of the same components. Maybe someone who really knows ships or boats is going to be able to spot that it's wrong, but on a basic level, it looks like it functions, and as far as I'm concerned, that's all it has to do. Also, in this case, drawing all the rigging in silhouette didn't hurt. In the final drawing, much of the boat's in shadow anyway, and it's going to be reproduced at literally the size of a postage stamp, but even at that size, those details make a difference.

And I still have no idea how this thing works.
Posted by Jed Alexander at 5:07 AM