Another image for the project I mentioned in the last two posts. 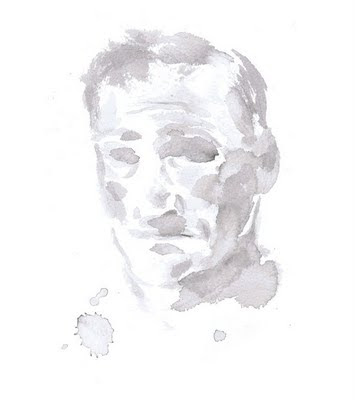 This is done in ink wash--the objective was to draw a spontaneous looking portrait that could possibly be made with found wet media and whatever might be at hand. I used a sort of crappy brush, but the idea, in this case, was that the drawing was supposed to have been done with a napkin and coffee. I've never tried to paint something with a cup of coffee, and I imagine it would be hard to do, but this is more of an idealized version of what that might look like.

I won't go into the specifics at this point, but the mood of the piece is meant to be somewhat eerie. It's rare that I get to do something this expressionistic for an illustration, so it was refreshing to be able to paint this loose, and not have to be too fussy about it.
Posted by Jed Alexander at 3:45 AM