I did this illustration in order to include more kids in my images, but at the time I made it, it hadn't occurred to me that it was a Halloween image, so it's Halloweenness is a complete accident. In fact it didn't occurred to me until I completed it. My original plan was simply to do a birthday party, but I like to draw animals so I added the animal costumes. ThenI wanted to add some dramatic lighting, so I thought it would be nice to have it at night in the forest. Then, in the end, I decided to add a big bright harvest moon, which also helped to balance the image, bringing the eye around from the focal point. 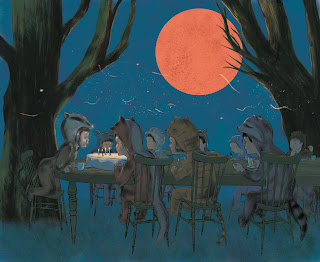 And here's a detail: 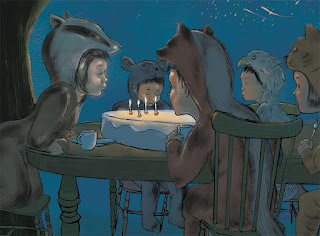 I like the feel of this one, and now the fact that it's an unconventional Halloween image. I like that it has a little element of mystery, why these kids are out alone in the woods with no adults. It reminds me a little of Peter Pan's lost boys, and of Max, from Where the Wild Things Are in his wolf suit.

Where Have I Been?

I haven't posted in quite a while, in part because I didn't want to show this one in progress. The images never quite looked right on their own--it's largely a bunch of drawings of kids sitting in space, since the background was done separately.  I was also a little unsure of this one until it started to come together.

The other reason I haven't been around is because I've been putting together some of my writing projects for submission. More on that later. No definitive interest by publishers yet, but there's some other news I'll be sharing soon that's almost just as good.

My Daily Routine: The Long Answer to the Question, "How Long Do you Spend Every Day Working?"

When I've gone to workshops and artist speaking engagements, someone is always bound to ask, "how long do you spend every day working?" When I used to hear their answer, I generally felt woefully inadequate comparing my own productivity to theirs. I think discipline is something you build up over time, and everyone has their own way of doing this. It took me years to develop the discipline I have now. For me, routine is critical, but time spent working and time spent wisely are two different things.

Using the Pomodoro technique I've mentioned in earlier posts, I've gotten a better sense of what a real work day should be, but the Pomodoro technique is new to me, so the work day I describe here is something I've only developed recently. I try to work about 12 to 16 Pomodoros (as described in earlier posts), or 25 minute periods every day, while spending the morning writing. I don't time my writing period since it tends to vary, though I try to write 200 words at the very minimum, though usually I write more On bad days I write less, but these are rare. This takes about two hours. While taking breaks during my art making time maximizes my productivity,  taking breaks slows down my momentum when I'm writing, so for me, it's better to spend a shorter but focused and uninterrupted period writing than drawing. During my Pomodoro breaks I like to go on Google+ or Facebook, but these breaks go fast! (But that's kind of the idea)  I tend to work on the weekend as well, but less, because of household chores and other responsibilities, though sometimes on weekends I'll have a longer writing session. And working doesn't always involve drawing. Sometimes its about collecting reference and doing research. Sometimes it's inking, or coloring. Sometimes I'll spend the whole day spinning my wheels trying just about everything and failing miserably to get anything to work.

So my day begins at 5:30. I usually screw around for an hour, then walk our dog,  Cinder. When I get back from my walk, I eat breakfast. Writing usually follows, unless I'm doing something like a blog post, but that, I guess, also counts as writing. Drawing begins at 9:00 to 9:30, and ends anywhere from 5:00 to 6:00, or 6:30. I usually take an hour lunch around noon, sometimes longer if I have errands.

Wednesdays I teach a student for an hour, and every other wednesday I have a figure drawing session in the evening that I administrate, which is usually a four hour time investment or more. Hiring models and other general upkeep of the group is also time consuming, so I don't tend to draw much on these days, but I do tend to write.

The Virtues of Goofing Off

Of course all of this is subject to having a life. This doesn't always represent a typical day. The math adds up just a little too perfectly, and most days aren't perfect.  There are always other responsibilities and distractions that come up, or sometimes I just take the day off. Or I'll take a trip. Or I'll go to the comic book shop.  Or I'll decide I just want to watch a movie instead. I like to spend time with my wife. I love having the evenings free. This said, I don't tend to get out much. social networking sites are great, but they're also a great time waster, but the Pomodoro Technique has really helped my limit my internet time.

I think the consequence of being a full-time artist is spending a lot of time alone, and having your world become just a little smaller than it could be. If you want art to be a true discipline, this is the way it has to be. You have to make it an integral part of your life, but it's also important to have a life. My studio is a tiny room in our house with a single window that looks out onto the backyard. I like my work, so its not exactly a hardship, but sometimes you need to get out of your cave and get a little sunshine, or goof off, or otherwise do what you need to do to enjoy the life you have. And exercise! Get some exercise! Many Illustrators tend to get pudgier as they get older, so to avoid falling into this trend, I try to ride my bike whenever I can. For me, this isn't too hard a habit to maintain--it's more of a necessity, since I don't drive.  but it's always good to have some kind of outlet for exercise. I intend to to have a long life and career. So eat right, exercise, develop your discipline, and enjoy your life and work! That's the best advice I could give anyone who wants to become an illustrator.

Edit: I originally wrote "6 to 8 Pomodoros" when I meant to say, 12 to 18 Pomodoros. I tend to add each two in my head as an hour, so I was thinking hours instead of 25 minute periods. Oops!
Posted by Jed Alexander at 8:33 AM