Another mailer to promote myself a children's illustrator.

I'm pretty happy with this one. The monster ended up looking a little like something drawn by Eric Orchard, but this didn't occur to me until later, so, sorry Eric. Apparently you were my unconscious inspiration.

Again I was thinking about type and how it can be integrated effectively in an illustration, but at the same time I was thinking about how I can use the format of the mailer in a novel way to show sequential action. Just like the way illustrators try to take advantage of page turns in book illustration, I wanted to take advantage of how the mailer would be read as it was unfolded.

This is the full sequence: 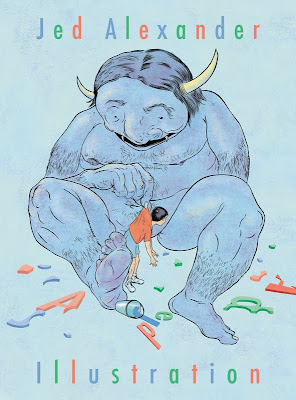 This is the orientation of the images as they will be printed, with the larger image on the opposite side: 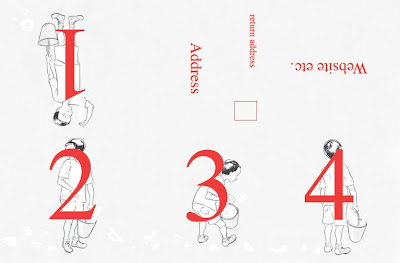 This is the order in which the recipient will see the images as they unfold the mailer, each row representing one fold: 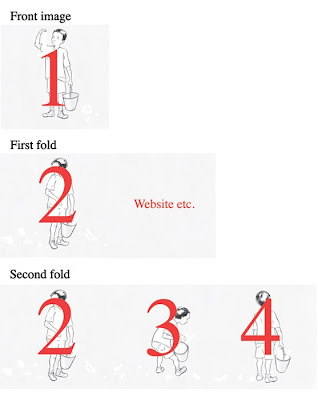 With the final image on the back: 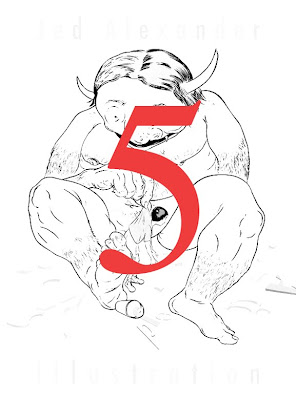 The ground for the image was a pastel texture with soft pastel on print-making paper. I first laid down a blue color, fixed it with spray fixative, then laid in a blue gray so the dark blue would show through in a textured pattern. Since all the color was eventually manipulated on photoshop, all that mattered was that it was two analogous colors. They could have been any two colors and I could have achieved the same result on photoshop, which is how I got all the nice purples in the monster. The figures were colored with watercolor texture. All the line art, was, as usual, done with brush and ink in multiple parts, scanned and assembled. Some changes had to be made: for example, the monster's hand had to be enlarged from the original drawing.

The letters were tricky. I didn't want them to have an entirely mechanical look, so after distorting them to put them in the right perspective and making the little pieces (Last time I made a big to-do about distorting type and what a bad idea it was, but this is kind of a special circumstance), I printed them out in pink on bristol board and painted the 3-dimensional edge on them using gouache, a water-based paint similar to tempera. Then I grayscaled them, separated them from the background and colored them on photoshop. All the type was done with Futura condensed.

My long term plan is to send mailers out about once a month for the next 7 or 8 months, then to send mailers about once every two months after that. This one is going to probably be sent in January or February. I sent a 16 page portfolio booklet to about 50 publishers, about a month ago, and will be sending my first mailer to these publishers and about 40 more, next week. My idea is to get a bunch of these in the can, first, so I can work on other projects in the coming months and continue to stay current with the mailers I send.

This is all a part of my single-focus effort to get involved in the children's and young adult book market. There's the writing side to this too: I'm in the process of putting a final draft together for my first YA novel for teens and am about to finish the fist draft of my second YA novel for teens. I've also got a chapter book for young readers and a picture book written that I would like to make dummies for, and a two-person show of new work at the Pence Gallery in February, my first real fine art show. The work in the show is very different than my illustration work: mostly dry brush and watercolor studies of animals and landscapes.

So a lot is in the works. hopefully in the next year or two my efforts will start to pay off!
Posted by Jed Alexander at 11:19 AM