Mercer Mayer: an Appreciation, or Why Mercer Mayer Is So Much More Than a Poor Man's Maurice Sendak 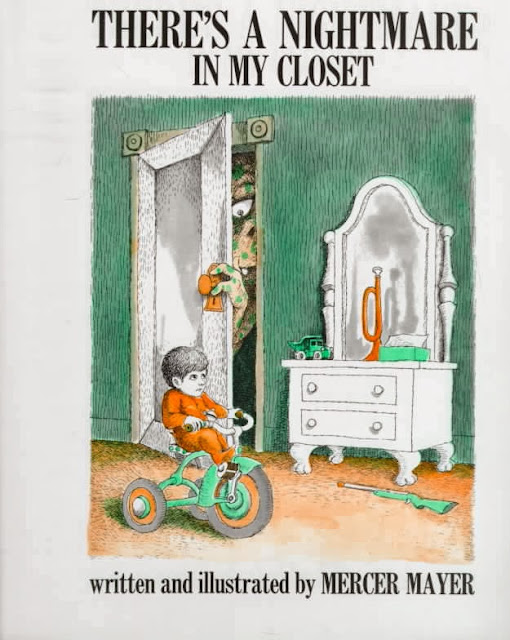 Mercer Mayer is best known for the seemingly endless and ubiquitous Little Monster, and Little Critter series, which I've never been too terribly impressed with. These series have become early reader staples, along with Arthur and The Berenstain Bears. So even if you don't know him by name, you've probably seen one of these: 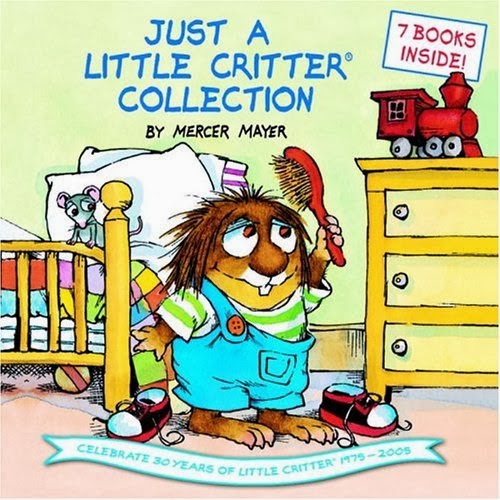 Early in his career, Mayer was criticized for being a Maurice Sendak clone, and it's easy to see why: 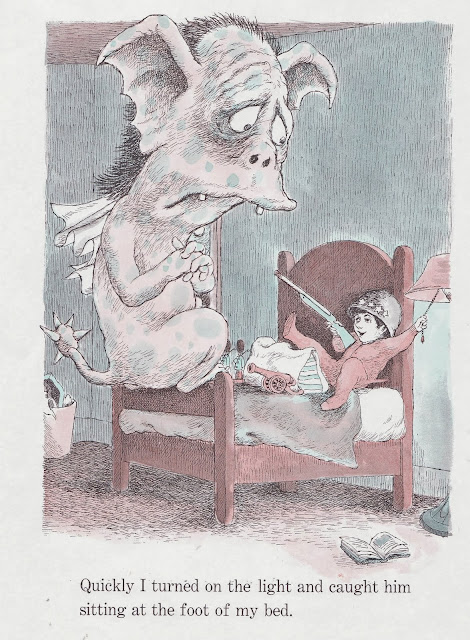 I know a lot of people are fans of the book, but I never liked There's a Nightmare In My Closet. To me, it always seemed like a less imaginative version of Where the Wild Things Are. Not that the stories were similar, but the look of the book was obviously more than a little inspired by Sendak's Wild Things. It's not just stylistically derivative, but a near dead-on impersonation. But it's no Wild Things. It was done early in Mayer's career, in 1968, was very popular, and helped to establish him in the field, but critics at the time felt the same way I did. Even as a kid, I wasn't fooled by the knock-off.

A book by Mayer in this vein that I do like is Frog Goes to Dinner: 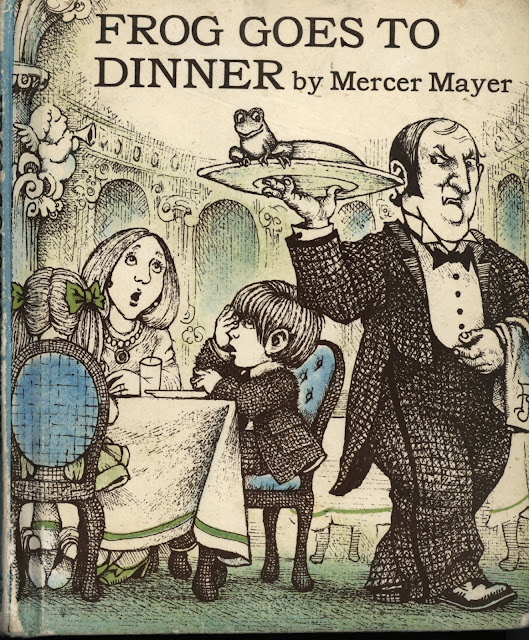 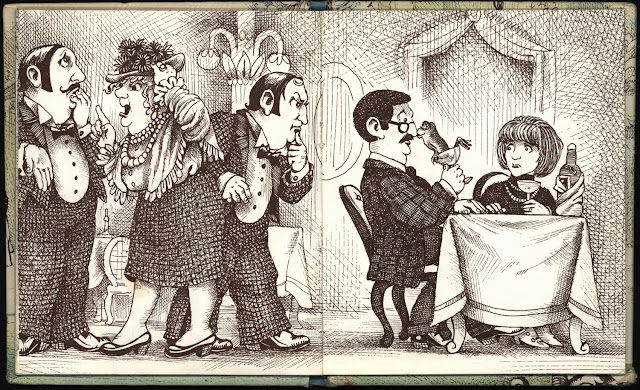 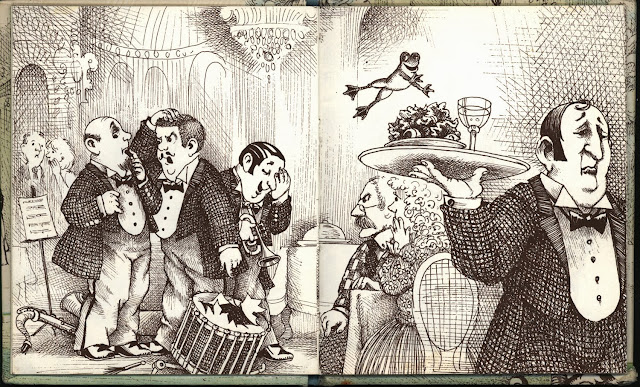 Beautifully drawn and completely wordless, it looks a lot like Sendak, but it was done with more imagination and energy than Nightmare. There were 6 Boy, Dog and Frog books in the series, all wordless, though I've only seen this one, published in 1974. The first of these books and Mayer's first published book, was A Boy, a Dog and a Frog, in 1967.

When I was in elementary school, I was hooked on the now out of print John D. Fitzgerald series, The Great Brain. These were stories that took place in Utah just before the turn of the century, about John Dennis Fitzgerald and his brother, The Great Brain, who was always coming up with some new way to swindle the neighborhood kids, or put one over on somebody. I cannot fathom why this series still isn't popular today. It was pretty brilliant. At least that's how I remembered it. It's been a few decades, but I think I'd still like The Great Brain. And though at the time, I didn't make the connection between The Great Brain which I loved, and A Nightmare In My Closet, which I didn't, The Great Brain was illustrated by The Very Prolific, Mercer Mayer. 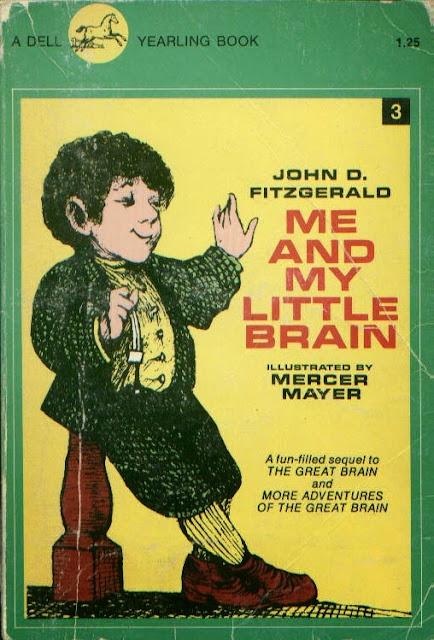 The interior illustrations were in black and white and featured Mayer's usual Sendak inspired pen work, but the subject was very different than Mayer's early work for younger children, and as the series progresses,  you can see Mayer coming into his own and forming his own identity as an illustrator.  The first book was published the same year as A Boy, a Dog and a Frog, and the last, a decade later. 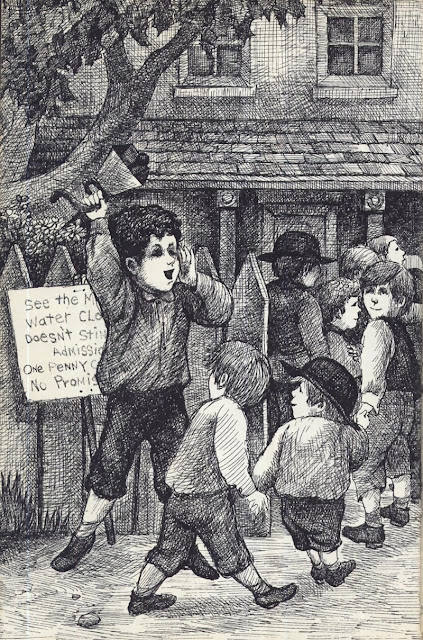 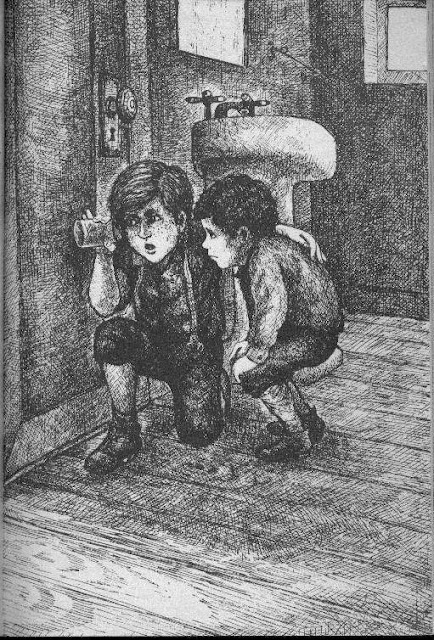 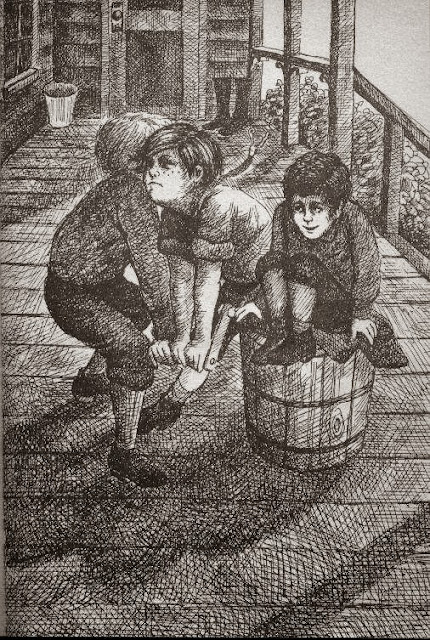 I find this image particularly affecting: 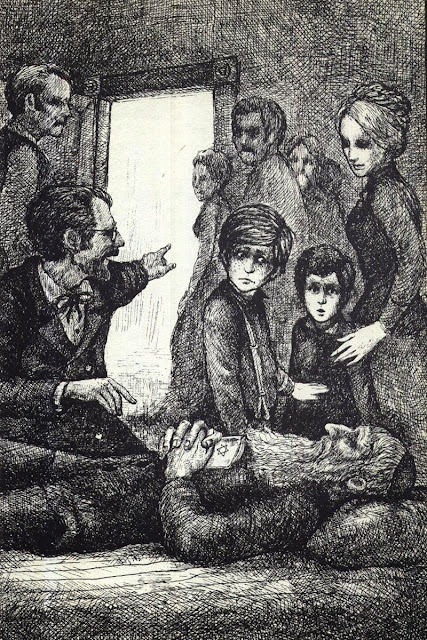 Here, on the cover of one of his later books,  you can see how his craft is a little more refined--he's no longer hiding uncertain details with dense crosshatching. In general, his approach is more confident and assured. 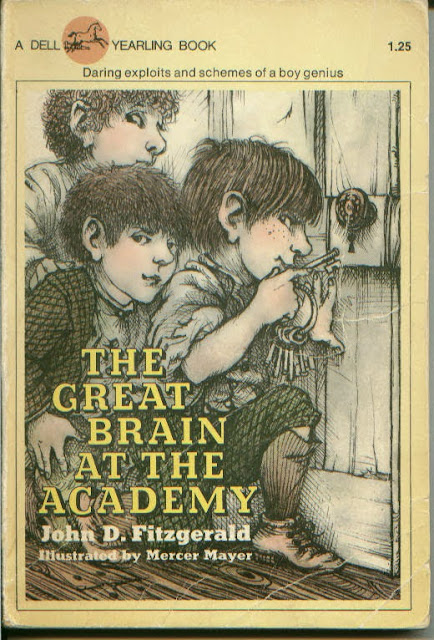 And he was starting to look less and less like Sendak. To be fair, when A Nightmare In My Closet was published, Mayer was only  25. But the book's enduring popularity unfortunately has eclipsed Mayer's other accomplishments. Of particular note is a book that's difficult to come by these days, the long out of of print, East of the Sun, and West of the Moon, a book I discovered only today, on a recent post by Charlie Jane, which inspired me to revisit Mayer.

This was published in 1980, 12 years after Nightmare, and just after the last Great Brain book appeared. It was based on a Norwegian folktale, and is probably the most beautiful thing I've ever seen Mayer do.  I've seen a version of Beauty and the Beast he did around this period, but it doesn't compare to this. Since the book can run you upwards of $100 these days on E-Bay, and since I've never seen the book in person,  I'm going to post as many images from the book as I was able to find: 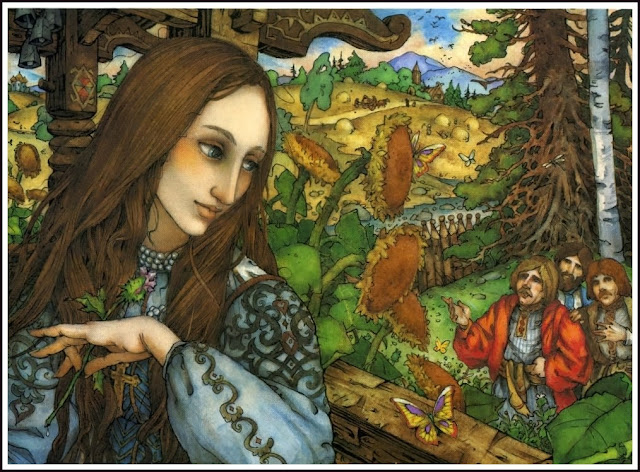 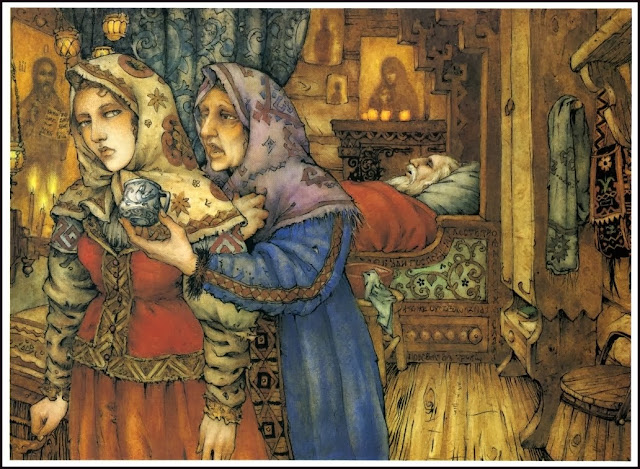 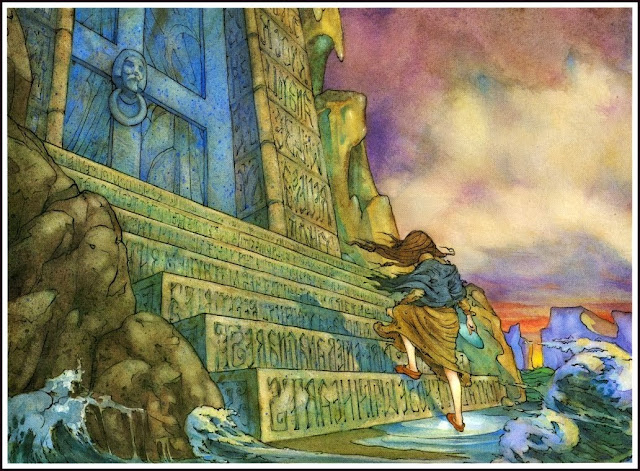 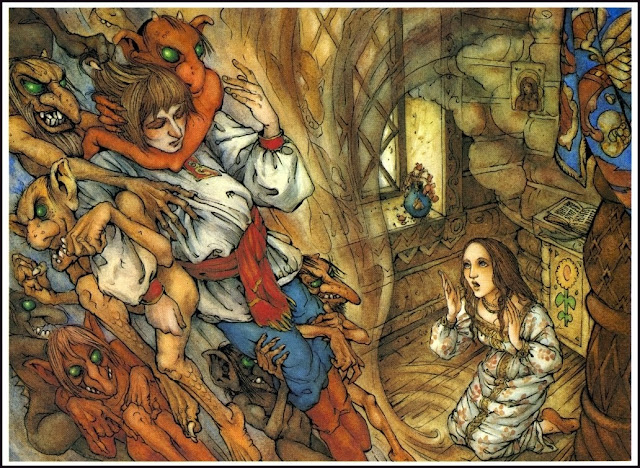 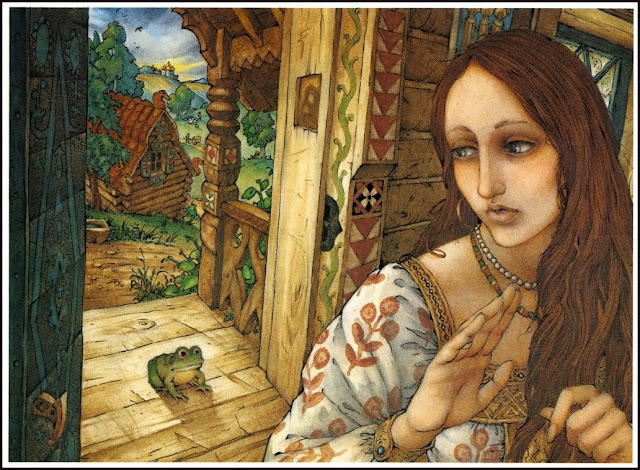 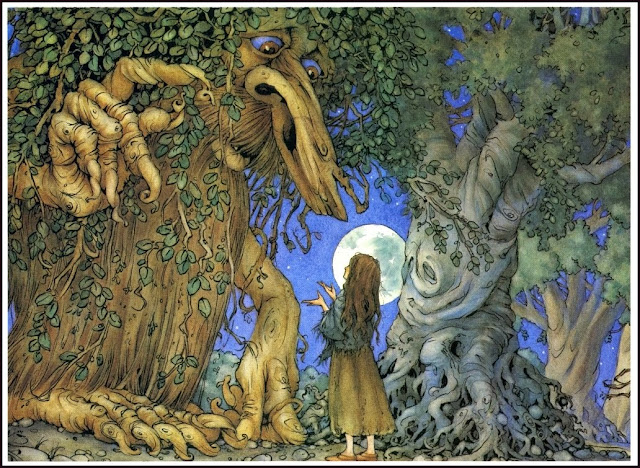 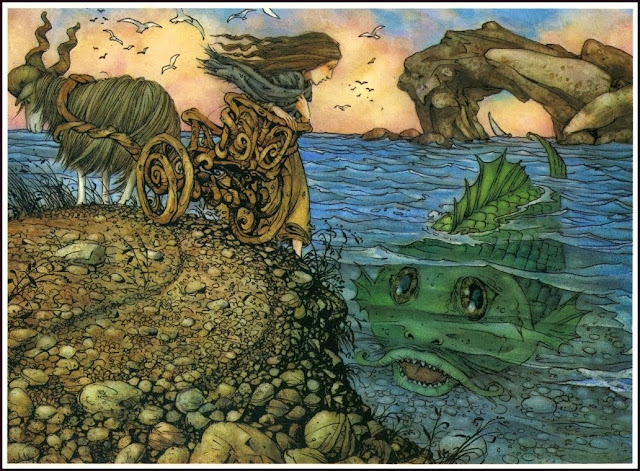 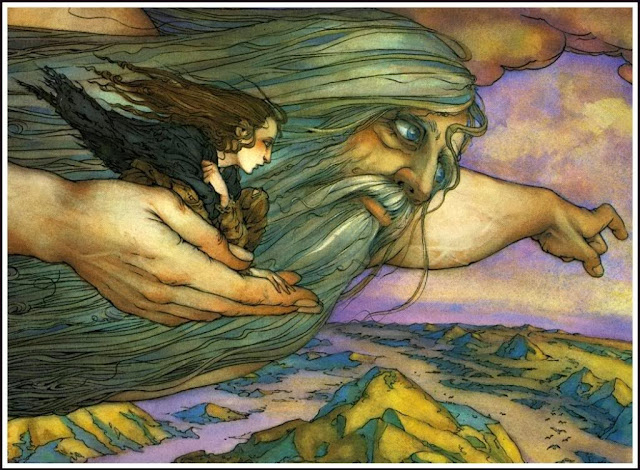 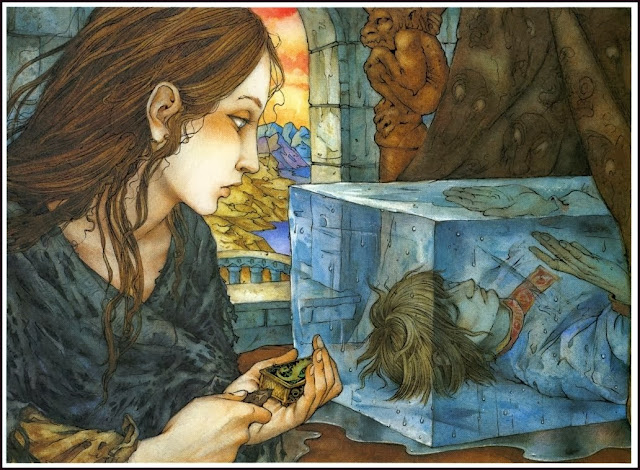 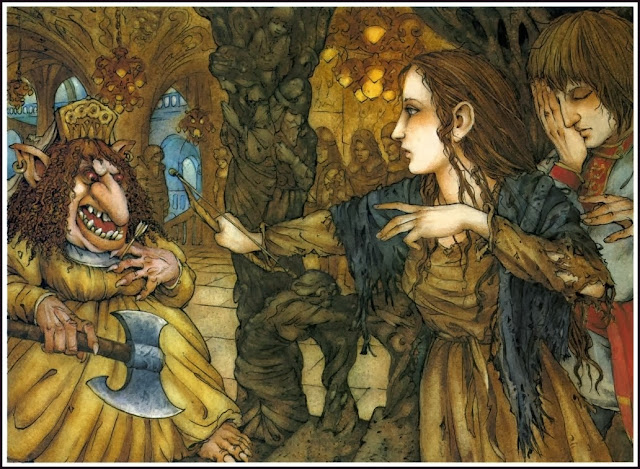 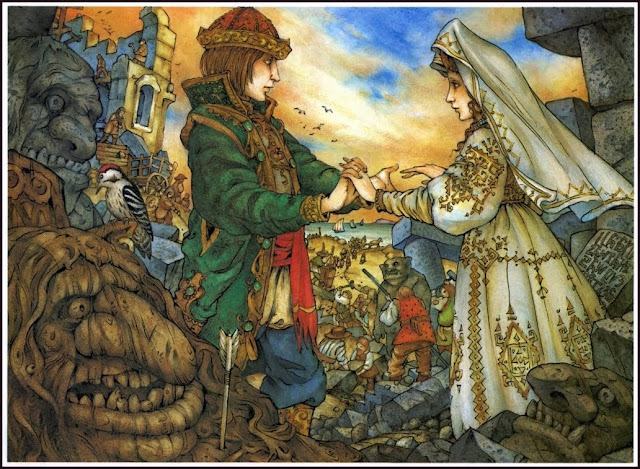 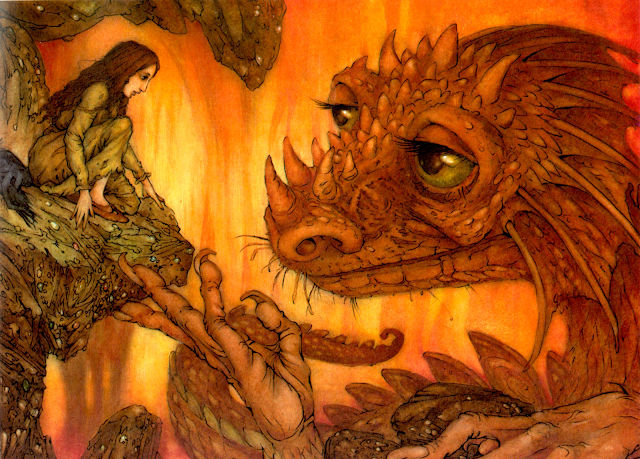 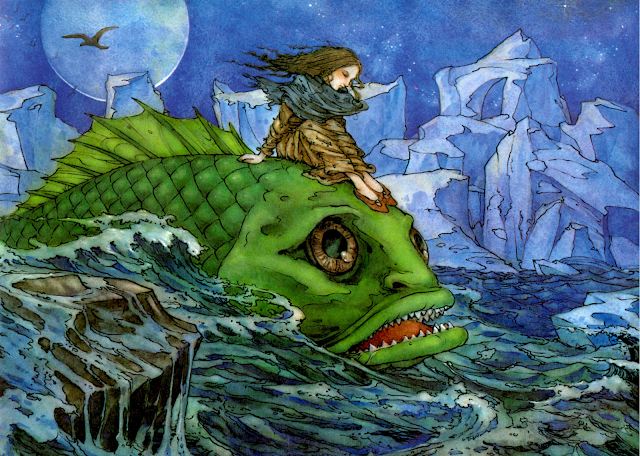 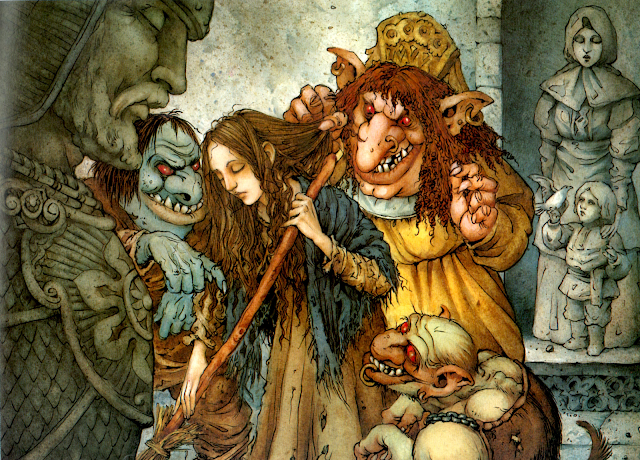 There's no crosshatching--just watercolor and contour, all Mayer with hardly a hint of Sendak influence remaining. I love these images, though I'll admit a prejudice against the doe-eyed dragon, but that's easily forgiven. It was a 70s thing, a little leftover zeitgeist from the  Keane kids and Robin James Serendipity series, and you can't fault the guy for being of his time. It's the only thing that really dates this book, and someone really needs to bring it back into print.

And as a cherry on the sunday, while I was tracking these down, I discovered this cover he did to one of my favorite books, The Master and Margarita: 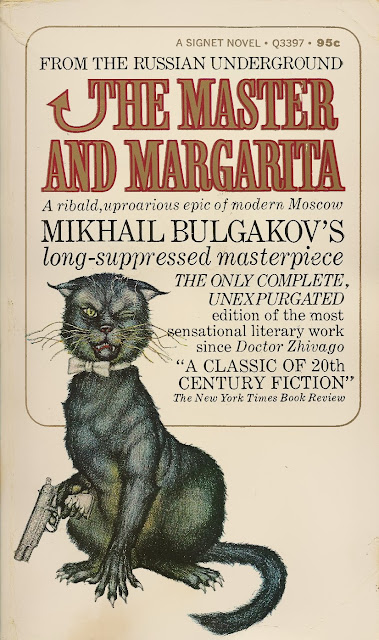 This was the cover of the version that I read, and it perfectly suits it! I had no idea it was Mayer!
Posted by Jed Alexander at 9:10 AM

Email ThisBlogThis!Share to TwitterShare to FacebookShare to Pinterest
Labels: A Nightmare in my Closet, Beauty and the Beast, Charlie Jane, East of the Sun and West of the Moon, John D. Fitzgerald, Little Critter, Little Monster, Mercer Mayer, The Great Brain