Usually I conceive of a piece with only a vague idea of how I'll attack the color, depending primarily on the strength of the line drawing, solving the color problem later. This time color was very much a part of the piece's conception. I had pretty detailed color notes very early on with this piece, inspired by the work of Mary Blair. Mary Blair was a Disney concept artist who had an amazing sense of color and design, and often the way her work finally appeared on the screen never quite matched up to be as striking as her original designs. This is particularly inspired by the backgrounds in Disney's Alice In Wonderland which still somehow managed to capture the character of Blair's designs.

My colors ended up changing some in the execution, particularly the purples, but largely this turned out much how I envisioned it, and from a color perspective I feel this is one of my better pieces. After this experiment I'd like to make color much more of an integral part of how I conceive a piece from now on. Another thing I tried here was losing the outline on the larger shapes, having the color go right to the edge. 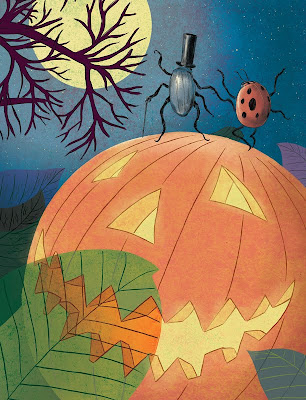 My only concern is that with the limits of digital printing. Dark colors don't fare as well as they might with off-set. With my ealier Kipling jungle piece I had to go to a photo processing lab to get the colors right for my portfolio because they were so dark, so printing this as a mailer may pose a problem. Laser printing tends to be kinder, but there are limits. I'll be attending a Society of Children's Book Writer's and Illustrator's conference today and had to settle for a laser printed copy for my portfolio because of time constraints, and the colors were much darker than I would have liked, but I decided to include it anyway because of the strength of the design. At any rate, how you see it here on the screen is pretty much how it's intended to look. Dark colors seem to fare better on Blogger as well.

My crazy color notes, followed a little less closely than I thought, it seems: 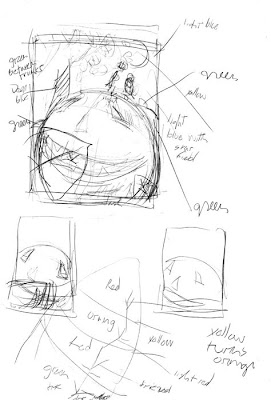 Posted by Jed Alexander at 8:51 PM