My latest freelance gig for Cricket magazine has me returning to the subject of geese--the eagle is the star of the show, but there are also geese, specifically Canadian geese. 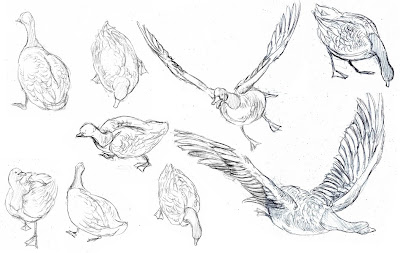 With this and my previous geese and bird images I'm learning a lot more about bird anatomy in general, feather patterns, etc. So this next image promises to be a little more informed. The most challenging thing I've been doing lately is foreshortening the wings. I've learned that wings aren't these fixed paddles as they're sometimes drawn, but when in flight, the wings change shape, sort of like when you snap a towel or blanket straight before laying it on the ground. There's a sort of rippling effect with the muscles of the wing against the air current. Though I've captured this intuitively from reference in earlier images, I haven't quite observed it consciously until now, after having drawn what has probably been well over a hundred birds. You can see this rippling effect more clearly in the eagle image that precedes this post.

I've probably killed an ink cartridge worth of ink on reference for this project, but I really feel it's been worth it. Comparing recent bird images to my first birds back when I did the James and the Giant Peach piece, my earlier attempts seem pretty naive.
Posted by Jed Alexander at 3:53 AM