Did this while watching the Ken Follett mini series, Planes of the Earth. Follett's not my favorite author, but the series is pretty good so far. As usual, these sketches have nothing to do with the show. I was just screwing around. 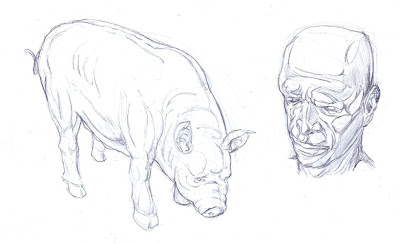 Also, listening to a lot of sci-fi and fantasy YA audiobooks while I work. This has become a thriving genre of late. When I was a kid there was little good sci-fi and fantasy specifically written for the YA market--Wrinkle in Time is about all I can think of, but right now there's a mini renaissance. I should mention a few of my favorites:

Unwind, by Neal Shusterman. About a future where teenager's organs are harvested. The science is not so good, but the story is.

The Curse Workers, White Cat by Holly Black. A very plotty fantasy about an alternate world where people have a variety of supernatural powers that allow them to manipulate people through touch in various ways. One of my favorites this last year.

Peeps, by Scott Westerfeld. Westerfeld has written a number of good YA fantasy and sci-fi novels for the YA market, including The Uglies series, and the steam punk books, Goliath and Behemoth, but this is my favorite of his so far. It's about a vampire-like virus--yes I know, vampires again, but wait--that involves a lot of the real science of viruses. It's really a sci-fi story about how viruses work, and every other chapter talks about a real virus and how it interacts with its hows. The Last Days, the sequel is also good, but this one is the best so far. I've read the first two "Uglies" books, which were pretty good as well.

Probably the next best series by Westerfeld after Peeps is the Goliath series--though I've only read the first. I'm less into the steam punk thing, but they're nicely written and he's created a really comprehensive world and alternative history. His least interesting series is "The Midnighters" series--I've read all three, and it's just a better than average supernatural adventure series. It's got an interesting premise--at midnight everyone and everything in the ordinary world freezes and "The Midnighters" are these kids who are able to be conscious during this extra hour of the day. They have supernatural powers, and then it's just good guy bad guy stuff, with these other supernatural creatures and their allies.

Gone, and Hunger from the "Gone" series by Michael Grant. These aren't as well written as the others I've mentioned, but they're still great stories. Everyone 15 or older has spontaneously disappeared and the remaining kids have to piece together society again. Some of them start to develop supernatural powers--I think the premise would have worked fine without this part, but it's still a fun series so far. The new one came out recently, "Lies", though I haven't read it.

I'm currently listening to, Virals by Kathy Reich. So far, great fun, a murder mystery, a science fiction story, very plotty, a lot of real science about diseases and forensics, Looking forward to how this one turns out.

The Hunger Games is pretty good, but I think, a little relentlessly bleak--at a certain point you wonder, can anything worse happen to these people? Another good book is "The Giver" which also has two sequels, though I've yet to read the sequels.

Any other recommendations?
Posted by Jed Alexander at 6:11 AM