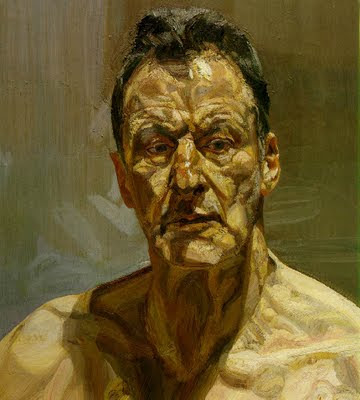 Lucian Freud was a painter who rose to prominence in the late sixties. During a time when abstract expressionism and minimalism were in vogue, Freud chose a less fashionable subject, the figure (And yes, he is related to Sigmund Freud. He's Sigmund Freud's grandson).

Lucian Freud was my introduction to naturalism in painting. Naturalism was something I would later discover in the films of Mike Leigh, and ultimately in the single most influential artist on both my art and life, John Cassavettes, but it all started with Lucian Freud.

Naturalism isn't the same as realism--realism in painting usually refers to photo realism, and photo realism has as much to do with the two dimensional record of the photograph as the resulting painting. A photograph is a single moment captured in time, inert, and unchanging. A painter may choose to elaborate or accentuate the information in the photograph, but this doesn't change the fact of the photograph.

Naturalism is something different. The subject is typically painted or drawn from life. From life the painter records a different kind of fact--the fact of a human body that exists in time and space. Lucian Freud painted his subjects over many sittings, and the results are a kind of painstaking observation, an attempt not to render the subject realistically, but to record a kind of truth about the subject. This is not an act of precision, but of interpretation. His paintings weren't cold and objective, but a dialogue between subject and painter. The American painter Phillip Pearlstein employed a similar kind of observation, but he painted his human subjects like still lives. Unlike Pearlstein, there's an essential humanity in Freud's paintings--he truly captures the character of his subjects. It's a kind of magic you sometimes see in painting that you can't really define, and Freud's paintings definitely had it. 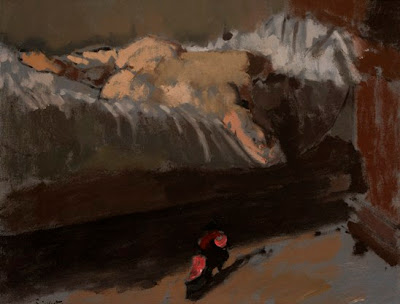 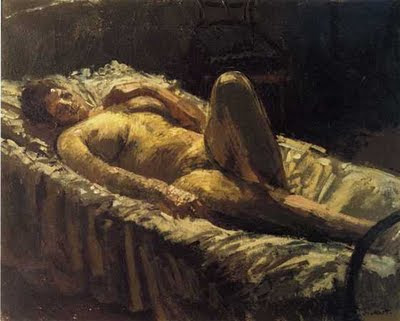 Here, Sickert attempts to capture the truth of his subject, but his paintings are more about the human figure itself, rather than the personality of an individual. From Sickert, Freud borrows both this search for the truth of the figure, and Sickert's heavy application of paint. This heavy application of paint is inspired in part by impressionism, but the impressionists and post impressionists had a different objective in mind. The impressionists--even painters like Toulouse-Lautrec, who very much tried to capture the character of the people he painted--employed a more romantic treatment of the figure, and Sickert aimed to eliminate this kind of romanticism from his paintings in an attempt to capture the essence of his subjects. 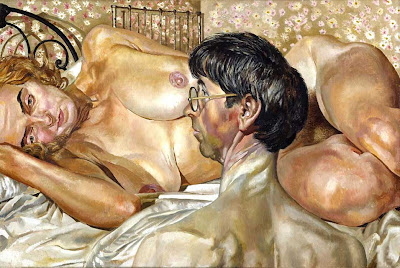 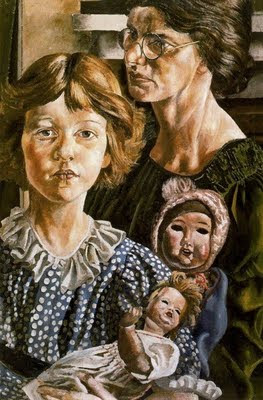 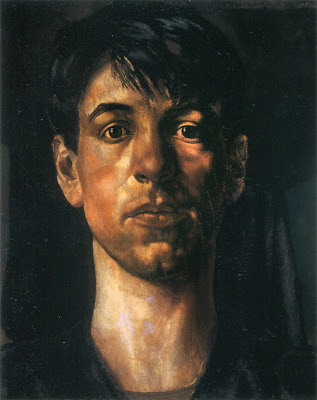 Though Spencer would sometimes paint more classically influenced narrative subjects, his greatest achievement was his portrait and figurative work. There's an element of expressionism in Spencer's work, but it's mixed with acute observation and a more contemporary, naturalistic approach to his subjects that is closer to Sickert's approach than expressionism.

Contemporaries of Spencer were the German Expressionists like Otto Dix, and Oskar Kokoschka: 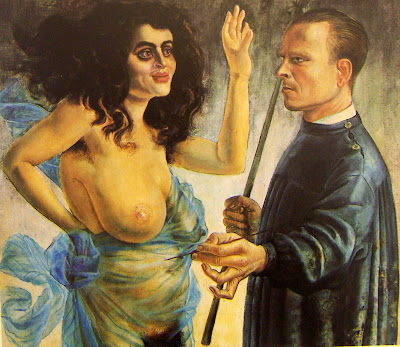 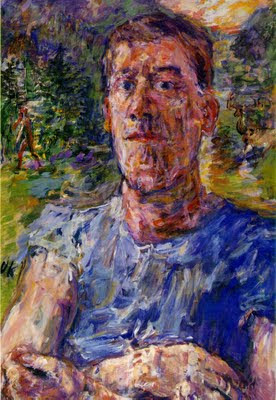 I discovered the German Expressionists before I discovered Freud, and they too, had a great impact on me, but for different reasons.

Expressionists pushed the fact of their subjects in a different direction--their approach is more visceral, exaggerated, and sometimes almost caricatured. Like Sickert and Spencer, there's no attempt to romanticize the subject, but it's a different kind of truth, and naturalism is a distant concern.

Freud too, had a more mannered approach in his early work: 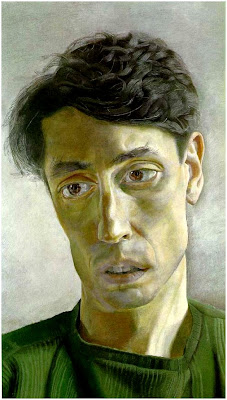 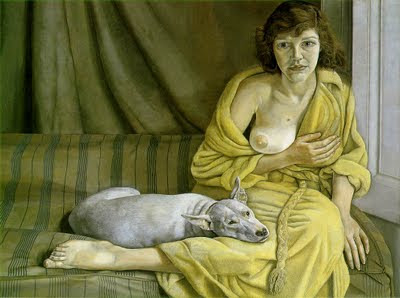 But he was still searching for something. The Spencer influence is most apparent to me in these early portraits, but unlike Spencer, he doesn't quite capture the essential truth of his subjects. These portraits are neither truly expressionistic or truly naturalistic. Here he starts to get a little closer: 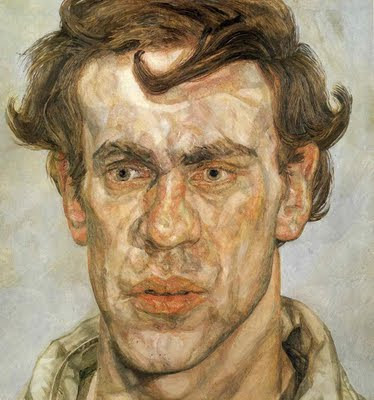 His technique, here is starting to resemble his later work. He doesn't employ the same thick bodied approach to paint, and he still hasn't quite captured that illusive quality of naturalism that he does in his later work, but it's getting there.

Here's Freud in his most mature period, but I'll just let the work speak for itself: 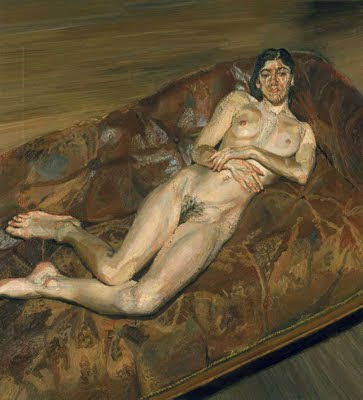 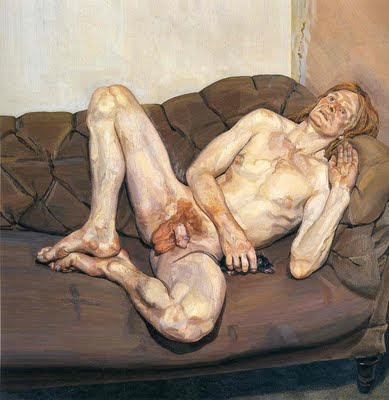 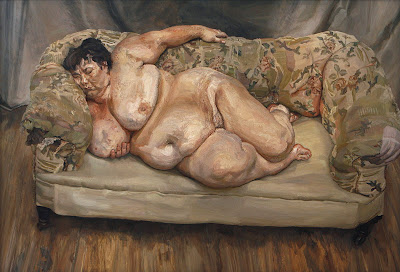 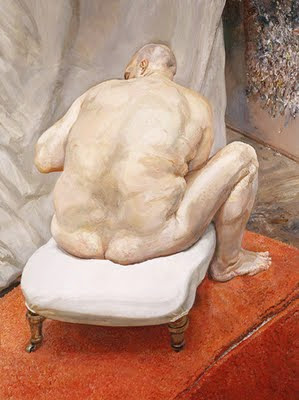 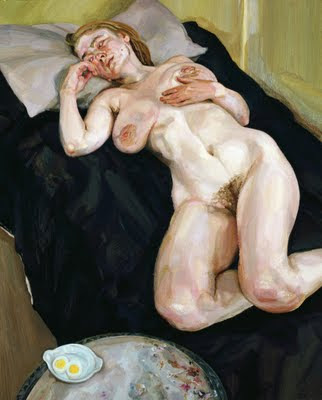 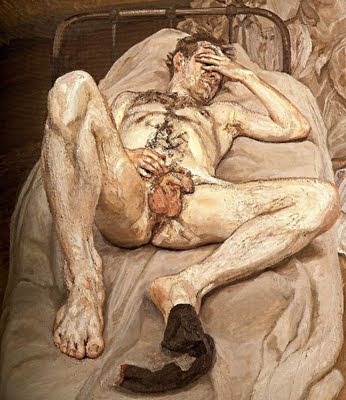 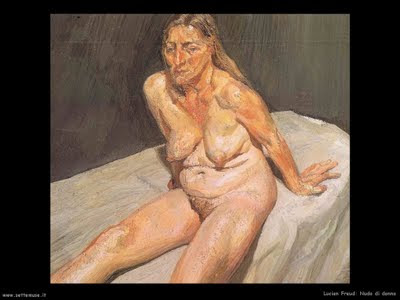 A contemporary of Freud that also knocked me out at the time, was Francis Bacon: 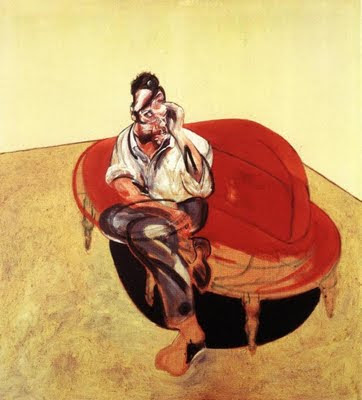 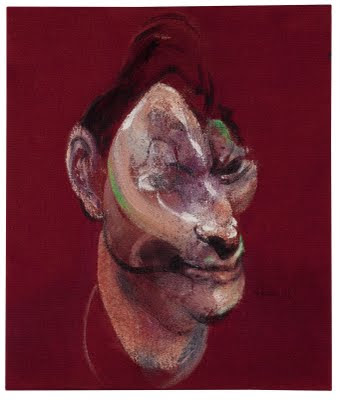 I discovered Bacon before Freud. Bacon, both more expressionistic, and more visceral than Freud, seemed like the ultimate consequence of German Expressionism. I wanted to be Bacon as much as I wanted to be Freud. I couldn't get enough of him.

Then I discovered Freud's other contemporary, Frank Auerbach, and it all started to gel: 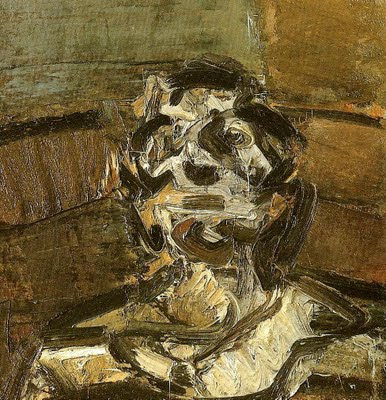 Auerbach, who is still living, has similar ideals to Freud, but with a little more romance. He's a little bit Freud, and a little bit Giacometti, but Auerbach is mostly Auerbach. Each painting is done from life in a single day, though painted from multiple sittings, and he's as meticulous in his way as Freud. At the end of each day, if he's not happy with the painting, he scrapes off the paint, and his studio has a couple of inches of discarded paint on the floor from this process. But Auerbach too, is after his own version of the truth, but more like Sickert in the sense that he's trying to capture the unvarnished truth of the figure in the space it occupies, rather than the personality of his subject.

In his drawings he will work the surface practically raw with an eraser: 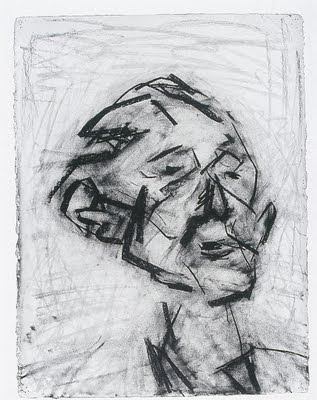 There was something about that stubborn persistence to find what he was looking for in his drawings and paintings that was, and continues to be really attractive to me.

But back to Freud.

Freud As a Personal Influence

I discovered Freud's work in college, when I was 21, and it blew me away. I immediately started attempting to achieve this sense of naturalism in my own work. In my own romantic attempt to get to the "truth" in my painting, I worked from life and painted with thick acrylic paint, directly with my hands, without brushes, which at the time I considered to be pretty noble of me. This painting was one of the few I held onto from that period. My dad sat for it. He spent most of the sitting napping. I have a lot of pictures i've made of my dad napping. 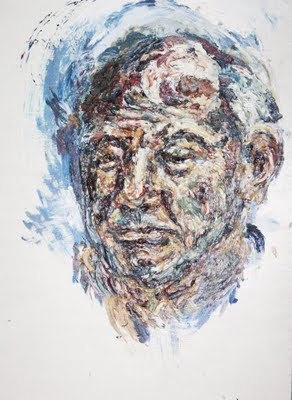 It currently hangs in my living room, and it's probably the only painting I did in school that I'm still happy with.

Like most art students I took myself pretty seriously. I remember a particularly annoying guy I went to school with then, who also took himself just a little too seriously. It's easier to dislike in others that we don't like about ourselves, so I took an immediate disliking to him, and when I found out he painted with his fingers, I started to realize just how pretentious I was. It was a tough lesson. 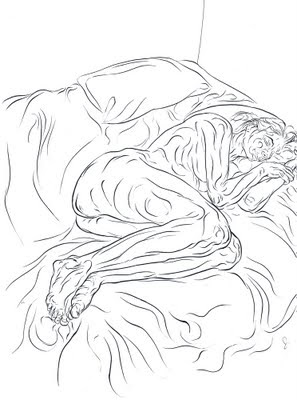 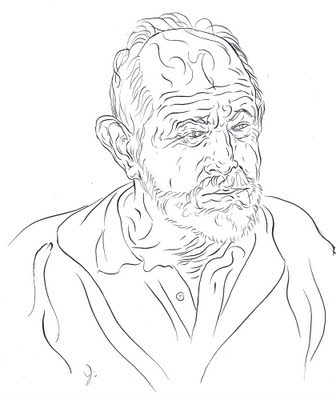 This was the kind of work I was doing when I graduated: giant drawings (I think the first one is something like 30 by 40 inches) in crow quill pen done from life. When you graduate from art school you're confronted for the first time with the reality of having to live your life without the shelter and support of art school. In art school, it's easy to come to the conclusion that you're brilliant. Some people will even tell you that you're brilliant. Eventually you discover that maybe you're not so brilliant. It's a bitter pill to swallow. Then there's the reality of trying to make a living, of trying to figure out what you're good at, and what you're good for. It's taken me a very long time to figure that out. I'm a bit of a late bloomer that way.

So if you know the work I do now, you'll notice that it's about 180 degrees from what I did then. All those high ideals and pretensions were causing me to get in my own way, and I lost track of why I wanted to make art in the first place. I wanted to tell stories. I wanted to be an illustrator. But it took me till just a few years ago to find out what truly gives me pleasure in the work I do. But I can't blame myself entirely. Freud, and the London figurative painters in general were pretty powerful influences.

And to close, here's a painting Freud did towards the end of his life: 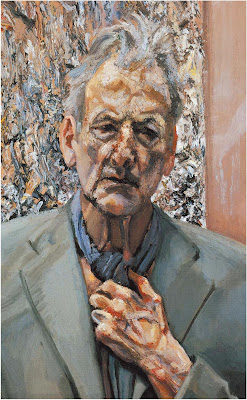 Comparing it to his somewhat earlier self portrait above, it's almost as if he's returned to his roots with a more Sickert-like approach, while still capturing the essential character of his subject. Freud will be missed.
Posted by Jed Alexander at 12:11 AM