Piecing It All Together, and What I Learned from Barron Storey

I've mentioned before that I ink pieces of my images separately and then combine them later in the final image, and I think this may have been a little confusing, so I thought I'd share a little more detail about how this works. Often I draw each figure in a scene separately much larger than it will appear, so in the case of a big figure like Blackbeard, who dominates the image, I drew him about 18x24 inches, scanned him in pieces, then pieced him back together on photoshop. Here's the figure in pencil, already cropped: 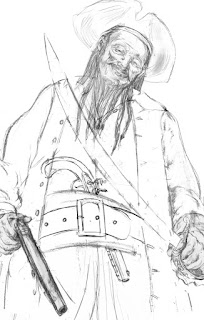 I added in the background later, but this is how I went about inking the figure. On photoshop, once I pieced him together, I cut him up again, this time in pieces that will be easier to ink. I make the pieces as large as they will fit on a piece of watercolor paper or bristol board trimmed to 11x17, the largest size that will fit in my printer. Then I blue line the parts, and print them out for inking. Here's the blue line: 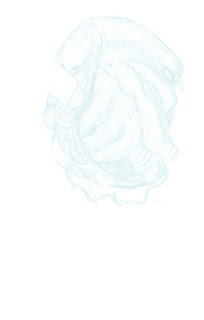 And here's the inked hand. I inked it this large so I can get more detail where more detail is required, while still working fairly loosely. 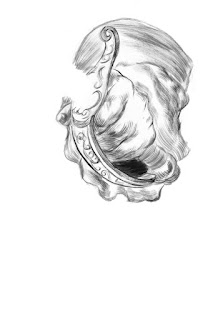 This gun is a small detail, but it's such a specific piece of hardware I inked it very large so that I could get it right. I inked the whole thing, even though only two thirds of it are seen in the image. This allows me to move it around if I want to make a few subtle changes, but it also helps it to look more consistent--the inks don't stop on one side of the belt and start again on the other--the strokes are continuous, giving more of a sense that the gun is actually behind the belt. 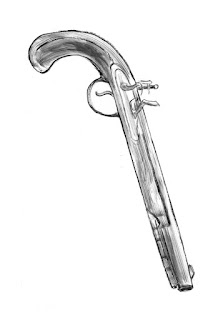 The torso required the least amount of detail, and I actually ended up inking it smaller than scale.  The belt I did separately. The buttons and button holes I did with white gouache. 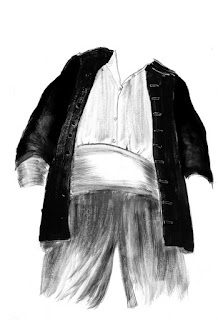 And here's the head: 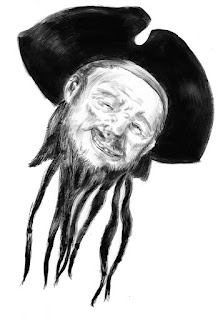 Again, I inked it as large as I could blue line it. Some of these took more than one attempt, and since the original drawing is preserved, I can print out as many blue lined versions of each part as I want until I get it right. This not only provides a huge safety net if I screw up, but it allows me to take more risks with the inks. In general it allows me more control over the overall outcome, even when I'm using a medium (dry brush) that's very unpredictable. I count on it being unpredictable--it's the little accidents that provide interest--but I don't want it to be so unpredictable that it doesn't do essentially what I want it to.  For dry brush--a rendering technique that uses less moisture and more pigment on the brush--I use whatever works, usually cheap craft brushes, and usually paint in a mixture of india ink and brown acrylic ink. The brown ink is mainly to fool me into using bolder blacks, since when I work in black ink I tend to be more timid with blacks. Once I scan it I turn it all black anyway, or I can turn the line any color I want to in photoshop.

One of the Many Lessons I Learned from Barron Storey

The materials available to you, in a lot of ways, determine how you're going to work. I'd love it, for instance, if my computer could print  in 18x24. Then maybe I'd ink my portraits larger than life! But the best thing to do is use these tools as an asset rather than a limitation. There's more than one way to skin a cat!

My teacher, Barron Storey once showed us an image he did for National Geographic. There looked like there were a hundred different animals in the picture. It was filled with detail. It seemed like an impossible thing to draw. Then he showed us something that to me, was a revelation. He took a little drawing of a monkey that was drawn on tracing paper, saturated the picture with fixative, and pasted it on the image. The paper disappeared and all you could see was the monkey! This is how he had done every animal in the picture. They were all a bunch of little pictures collaged together!

Storey once told me that he didn't think he could paint. This didn't make any sense to me. He did portraits for Time and other magazines that looked like paintings to me. He showed us the originals--they were made with just about anything he could get his hands on--colored pencil and markers and ballpoint pens and somewhere in there, paint too, but he used whatever he needed to get the job done. The message that a lot of his students took from this was: mixed media is the way to go, but mixed media wasn't the point. The point was problem solving. What do you want to achieve, and what's getting in your way of achieving it? You don't have to follow someone else's path to achieve what they do. It's not cheating to find your own way. You don't have to draw every monkey in the picture if you're afraid you're going to screw up.

Using the computer to assemble my images from scanned watercolor textures and ink drawings, I get to make more choices and take more risks along the way. I can push the color in different directions. I can be more bold with my inks. I can't control everything--you can never control everything, and you don't really want to--but I can make discoveries that I would have never been able to make otherwise with different tools. I think the computer is great, but it's not the only reason why I'm able to solve these problems the way I have. Without the computer I would have found a different way, would have made different discoveries. I would have used tracing paper, or magic markers, or toothpicks, or whatever worked, but the tools aren't important. What's important is that you use your assets to overcome your limitations in whatever way you need to. Be inventive! You might not find my way easier, but find what works for you.

I would stay away from the spray fixative though. Thanks to digital airbrushes and other digital substitutes for effluents, we contemporary artists stand to have a lot fewer respiratory problems. God I hope Barron has stopped smoking...

Oh, and if you missed it, here's the finished pirate.

Posted by Jed Alexander at 7:01 AM