So here they are! Pirates! The first two in a series of four. 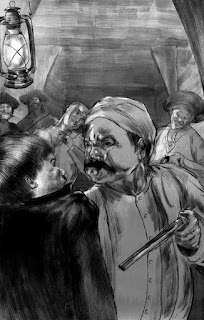 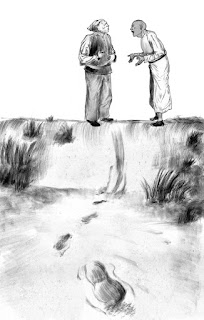 So these aren't actually illustrating any particular story, but are done as examples of how I might illustrate the interiors of a young adult book. They're meant to have a Treasure Island feel. The title for this nonexistent book might be something like, "Blackbeard's Ghost." These images get their inspiration from all those great classic black and white illustrators from the beginning of the last century, Like Noel Sickles and Robert Fawcett, and Joseph Clement Coll, and of course, Hal Foster and Alex Raymond. As a kid, when I'd see illustrations like these they seemed impossibly perfect, and I only just think I'm beginning to do work that comes within a mile of that kind of draftsmanship. It's always gratifying to do a picture, that makes you think, "I would have loved these when I was a kid." I'm also greatly inspired by N.C. Wyeth, who did what were arguably the best illustrations for Robert Louis Stevenson's Treasure Island ever published.

When I was a kid I had this illustrated book put out by National Geographic about pirates, I'm not sure of the name of it, but it was filled with all these great images, Wyeth's among them, and that first glimpse of those Treasure Island images stays with me. There was also these great illustrations by an illustrator whose name I may never know (I'd love to have that book again!)  of free divers, these guys who would dive naked for sunken treasure and pearls. I loved that stuff! I remember as a kid dressing up as a pirate with an eyepatch and a wooden sword and these gold clip on earrings my mom gave me, but the other kids teased me about the earrings. Earrings were just too girly, even when you were seven, even if you were a pirate, apparently. I remember feeling deeply embarrassed about that. That was before gangster rap, so I just missed the boat, I guess. It was a good look.

But this was a good time. More pirates to come!

Posted by Jed Alexander at 8:35 AM