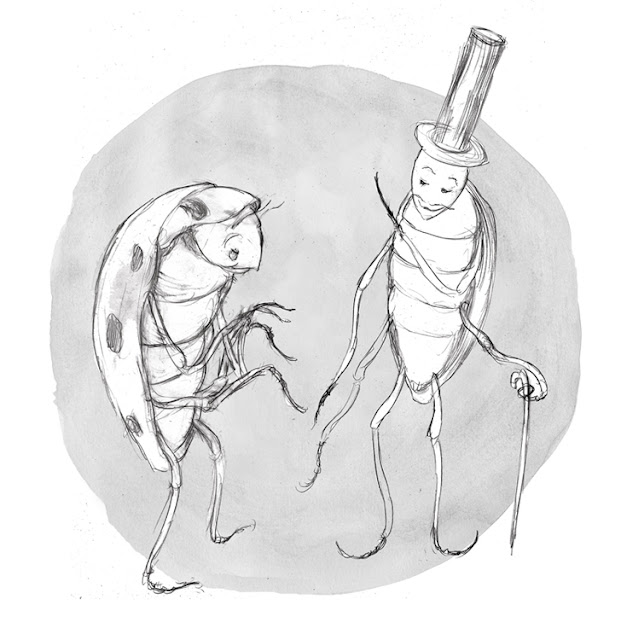 I went to figure drawing last night--I went earlier this month as well, but I'm still very rusty. It will take a another few sessions before I get back to form, or share any of my figures here. I really can't go that long without drawing from life without having to get back on it. So for now, more Ladybug and Gentlemen Beetle.

As I put together the mock-up of the book, I'm finding that as I draw the images, lines of text become superfluous to the action. The characters body language is increasingly carrying the story, which is as it should be. The best case scenario of a picture book is that the words are as important as the pictures, and the story can't be told without both. In aid of this, I rely on my favorite model.

One of many blurry photos that helped me get just the right gesture for this pose. What these guys lack in fingers, they make up for in arms and legs, so then it's about how to best translate human body language into bug body language.

I based the earlier dance sequence on stills I took from Fred Estaire and Ginger Rogers. Watching the film by frames I began to really see how Ginger Rogers was at times struggling to keep up with him. I never quite realized just how good a dancer he was! But I wanted my own dance to have a little more give and take. Here's that post if you missed it.

But often it's hard to visualize the gesture if you can't see it. I have a full length mirror in my studio, but often that's not enough, and so then it's time to prop up my camera and set the timer. Then I translate this gesture into bug anatomy, adding a little exaggeration and drama and hopefully subtlety. Cartoon anatomy has its challenges--everything is simplified and distilled.

In that earlier dance sequence linked above, one of the hardest things to do was to have Gentleman Beetle give a bow and offer his hand in that courtly manner of a traditional gentlemen. When drawing this pose, I neglected to use my favorite model, so I had to make it up from a few scant pieces of reference found online and my imagination. Little problems arose, for instance: my Gentleman Beetle lacks not only hands but a neck. All that head tilting and head raising has to be implied without a neck. His back, too, is stiff as a board, since it's all shell. So the arms legs and held tilt have to carry much of the motion. And I almost forgot to give him antennae when he took off his hat--I hadn't yet had to draw him hatless.

The more I draw the characters, the more I get to know them and how they work in space. Sometimes they've surprise me by subtly changing the tone of a phrase written in the prose. While in the prose I said, "Ladybug smiled" when she asks Gentleman Beetle for reassurance, suggesting that she's not at all as frightened as her words suggest, here her body language could easily translate as earnest entreaty. But she's still smiling. It's not as obvious. Should it be more obvious? I decided that no, this works better. Just as Gentleman Beetle has his own mock expressions as he playfully describes the scenario, Ladybug in her own way is just as clever.

Posted by Jed Alexander at 7:25 AM