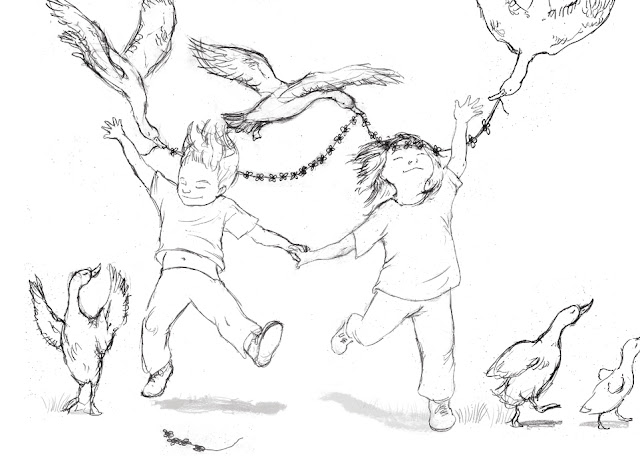 This is the climax of the story, and what I was trying to get a across was a kind of boundless joy. It seemed simple enough, but this was one of the hardest parts of the book to draw.

Expression and Body language in Kid's Books, or: Why am I so Damned Slow?

So you've got 25 pages, and just a handful of words to tell  a story. So everything has to count. Which means every figure has to say something with few or no words to say it.

Recently I've been kicking myself for taking too long to draw figures. At times it's taken me two full work days to resolve one single figure. I can draw an entire landscape of animals, but figures are the killer.

As a fan of comic books as a kid (and I continue to be a fan), particularly superhero and adventure comics, I envied and marveled at how artists were able to draw sometimes hundreds of figures every month. Then it occurred to me more recently that most of these figures had a range of about three or four expressions. This is more than adequate for an adventure story based on action and movement--where the figure's dynamism is more important than emotion. Every once in a while  there would be a figure that would convey something subtle in their stance or expression, but largely it was about lyrical movement and action. Other times the figures were more iconic, like cyphers, as in the case of Tintin. Alex Raymond, who did Flash Gordon of the 30s, was and still is a favorite: 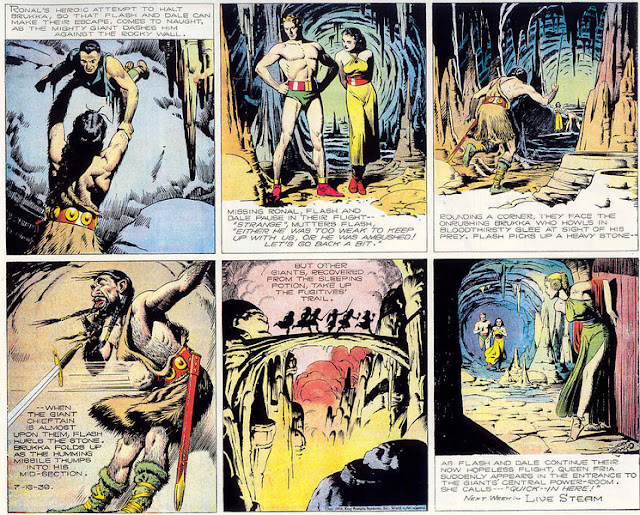 When I was first developing my kid's book portfolio, it was enough for me just to get kid anatomy right.  Now I'm thinking more and more about how to convey emotion, and more importantly, how kids convey emotion. Andwhen you take a closer look at some of the best of the children's illustrators, there's a little more going on in this department:


But some of the best comics artists are also capable of a little subtlety when called for:

So without the tyranny of a comic book artist's deadline, I'm still feeling my way through this. And so it's taking some time.