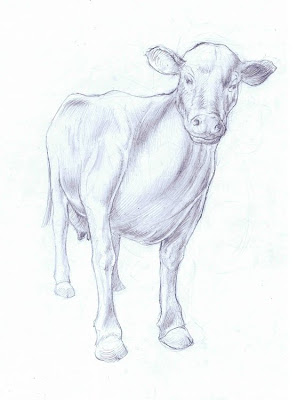 Done using a variety of sources, including Jack Hamm's How to Draw Animals, which is actually a great anatomy resource and not your typical "how to draw" book. I also used a plastic cow I bought for a dollar at Target. To draw figures, I sometimes model for myself using a camera with a timer, human anatomy books and other figure drawing reference, but animal anatomy is tricky. You can't get a cow to pose for you. So in drawing a variety of animals I start to learn the comparative similarities and differences between them. Goldfinger's Animal Anatomy for Artists is another great resource. There's always someone who can teach you something, no matter how awesome you think you are. I never stop learning, and am never above using instructional books or videos.

I drew this one while watching the BBC show, Misfits. 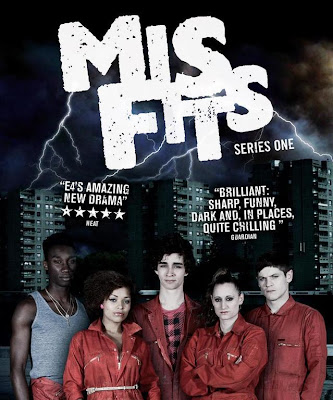 Last night Reg and I saw the first three episodes of the BBC show, Misfits. I knew nothing about the show before we saw it, and what initially seemed like a tired premise--a bunch of kids doing court ordered community service get basically, superpowers after a mysterious storm--turns out to be a very well written, character rich show. Some have called it a combination of the BBC show Skins and the U.S. show Heroes, but this doesn't really do justice to it. Heroes is a collection of silly archetypes and Skins has more of a summer teenage movie vibe. But Unlike many of the other BBC sci-fi and fantasy shows, the acting and writing in Misfits is naturalistic, and the stories are character driven. All the performances by the lead actors are excellent, and so far it's one of the very best recent BBC shows I've seen.

The storm has other supernatural effects that don't follow typical fantasy/sci-fi tropes: one girl simply makes people lose their hair when she gets angry at them. If she gets mad at you later on you just start losing your hair. It grows back (unless she gets mad at you again). It's such an absolutely useless superpower, while typically in this kind of show, everyone is able to do something really useful and fantastical.

There's an 80 year old woman who becomes young again and has an affair with one of the young leads in the show. After concealing this from him, she suddenly returns to her rightful age, causing the young guy to have to deal with the strange creepiness of her being old again.

There's a guy who periodically start thinking he's a dog and runs allover town naked. Nothing supernatural, he just thinks he's a dog.

I won't give away any more, but it's surprisingly good. Not to oversell it--it's no better than good, solid, well written television, such a rare thing, that when a good show turns up it can be a real pleasure.

I like fantasy and sci-fi, but so much of it is formulaic and trapped in the conventions of the genre. Here the storm isn't explained, and explaining it is not really that important to the premise of the show. I hope they never do explain it. A sci-fi explanation wouldn't serve to improve the premise, and a supernatural explanation wouldn't serve it either. Fantasy often seems to be a genre that's saddled even more than sci-fi with a handful of narrow conventions--limiting itself to one version or another of some long established mythology. In good fantasy, the vehicle for the speculative premise isn't as important as how the circumstances effect the characters. It's easy for a writer to get so distracted by the window dressing, that, even when they've come up with some novel twist on an old concept, they can't help but let the pieces of the formula fall into place. So hopefully, Misfits won't follow this pattern, and the writing is good enough so far, it's a fair assumption that it won't.
Posted by Jed Alexander at 3:34 AM