Diner Drawing, 3D models, and when Detail is and Isn't Necessary in an Illustration

Here's a diner I designed for my current project. 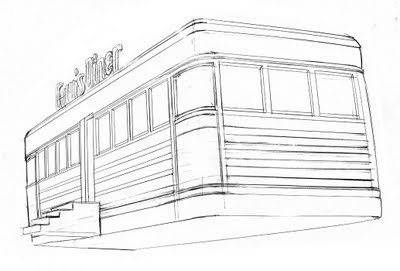 Perspective has always been difficult for me, and I've recently taken to making 3D models on Google Sketch-Up to make my life a little easier. Here's a basic model I made in Sketch-up that I then put under my light box to add details. 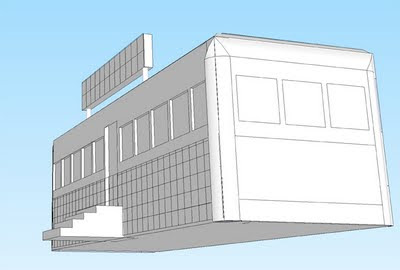 Then I added a little distortion to the drawing so it would have a more organic feel and wouldn't be so perfect. The approach still requires me to use vanishing points for some of the details, and I need to use vanishing points to conform the other elements in the picture to the model, (after I've posed my model to fit with my composition the way I want it to, first) but generally it makes my life easier. I can now turn my diner in any direction I want. This has been a approach I've used quite a bit with architecture, mostly using primitives and grids.

You'll also see here that I originally planned to have a standing sign, but opted instead for 3D lettering. The way I did this was by taking my typography and distorting it in photoshop so it would be in perspective. Then I added depth in the drawing.

This diner was based on photos of a number of different diners, so that I could come up with one, archetypical diner. Archetypes and symbols are useful in illustration if you don't want too much specific detail to distract from the focal point. How much observational detail I add to an image is relative to its importance. If I want to portray a very specific place or kind of car or house, I try to add those little unique details. But if I want to portray a "diner" rather than a diner, I keep things simple. Illustration requires you to consider the hierarchy of your subject matter: where do you want the viewers eye to fall? What distracts from, and what contributes to the story you're trying to tell?

Say you're illustrating a kid's messy room. The objects in the room should relate to the story you're trying to tell about the kid. If you have some odd or distracting prop that catches the viewers eye too much, that prop might take on more importance than you intend. A kid's room is a very specific place that requires very specific props. You can really express who a character is by showing where they live, but at the same time, you need to take care that the viewer is paying attention to what you want them to pay attention to. There's a difference between a stuffed toy monkey crammed on a shelf with a bunch of other props, and a stuffed toy monkey sitting on the foot of the bed. Putting it in so prominent a place makes it seem important, while as just another background element it takes on less importance. Make sure, when making an illustration, that your decisions are deliberate, and not simply happenstance.

This is the difference between a painting or drawing done for its own sake, and an illustration or sequence of images done to tell a story: with images done in sequence, or images that are meant to tell a specific story, the narrative takes precedent over the task of simply making a picture.
Posted by Jed Alexander at 4:17 AM