The first printed stories for children were based on folktales. From the Brother's Grimm to the English penny dreadfuls, stories for children weren't occasionally scary, they were practically always scary. And these weren't just a little bit scary. These stories were terrifying. Witches ate children. Giants ate children. People were tortured and murdered and otherwise dismembered. For some reason the German's were particularly good at this, but it was a tradition that went back long before The Brother's Grimm: 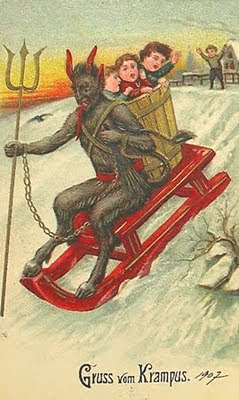 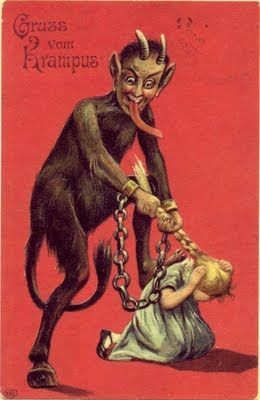 A popular character from English folklore, Krampus would collect bad children on Christmas, put them in chains and steal them away in a barrel.

The Brothers Grimm collected folktales that were told for generations.

You can sugar coat it all you want... 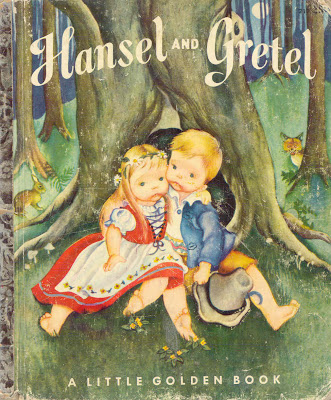 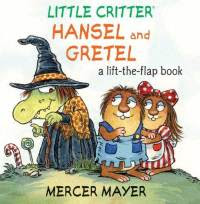 That witch wants to eat those kids. 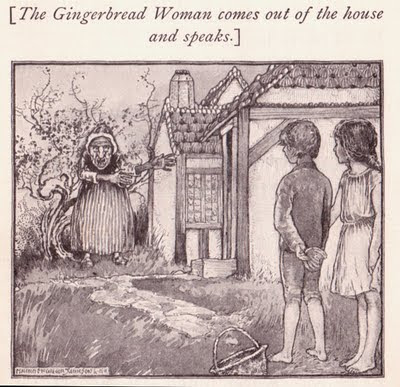 With these classic tales, illustrators working today, for some reason, are given a little more latitude than they are with more contemporary material. Here's one of my favorite contemporary versions of the story illustrated by Lisbeth Zwerger: 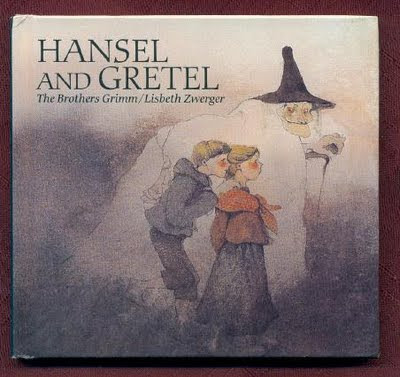 One of my favorite German children's books was a book written and illustrated by Heinrich Hoffman. It was originally released with a title that translates as, Funny Stories and Whimsical Pictures with 15 Beautifully Coloured Panels for Children Aged 3 to 6, and later released under the better known title of Struwwelpeter. In Struwwelpeter, there's a story about a about a girl who plays with matches who burns to death. There's another story in which a boy is warned not to suck on his thumbs. When he fails to take heed, a tailor comes to cut his thumbs off with giant scissors.

Oh, he doesn't threaten to cut them off--he cuts them off... 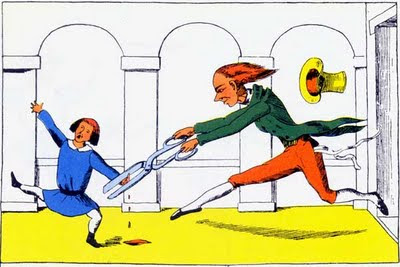 Recently, children's author and illustrator Bob Staake did my favorite version of Struwwelpeter to date, when he was asked by progressive publisher Fantagraphics if there was any book he wanted to do that traditional publishers wouldn't allow him to do. 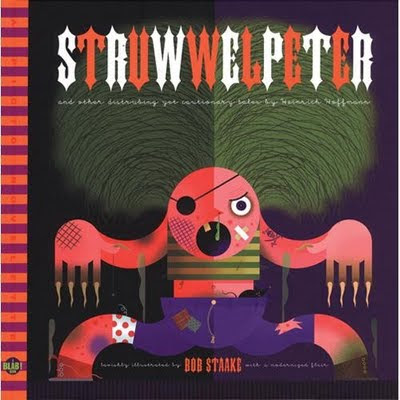 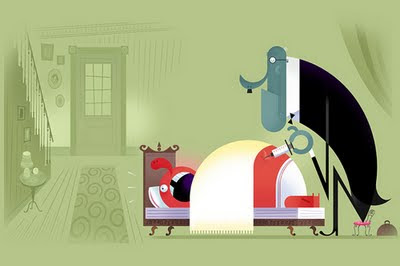 I'm not sure that a lot of parents bought this one, but they should have!

One of my favorite Russian Folktale characters is Baba Yaga. Baba Yaga is a witch with long spindly legs who lives in a cabin that walks around on giant chicken feet. She might help you out, or she might eat you (and she dines principally on children, of course), depending on her mood at the time. 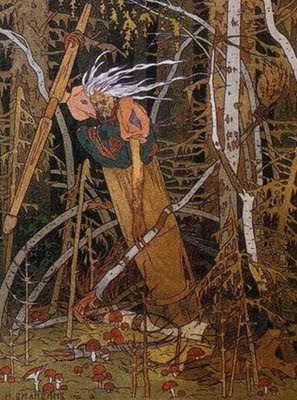 And then there are the French and the English. Here's a charming illustration by Gustave Dore for Tom Thumb... 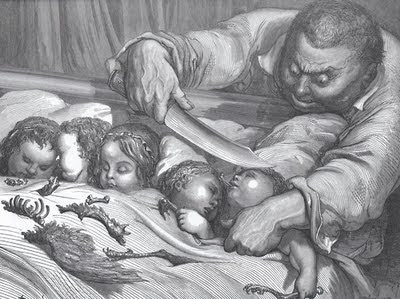 Now this isn't exactly the version of Tom Thumb that I would suggest you read to your kids, but it might have been more appropriate at the time. But I'll get into that more, in a moment. 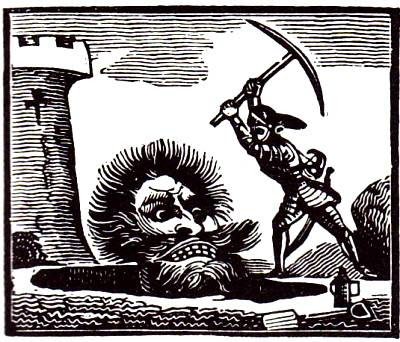 You can sugar coat it all you want... 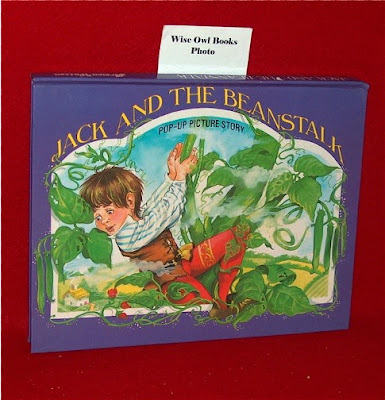 But the giant in Jack and the Beanstalk "smells the blood of a an Englishman" because he wants to eat Englishmen. 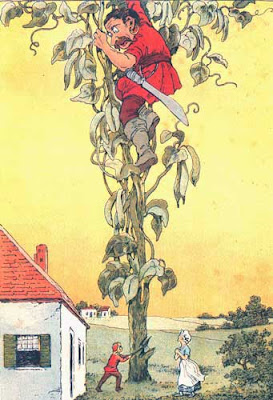 So why are these stories so scary? Were parents trying to torture their children? The way some of these tales were told did have something to do with a less enlightened form of child rearing, but the harsh morals became more obvious as times became more puritanical. The earliest of these stories didn't typically have an obvious moral. Maybe the moral of Hansel and Gretel is "be resourceful" or "avoid temptation", but whatever the moral, it wasn't quite as in your face as Struwwelpeter. I don't think the moral was the objective of the story. So what was the objective, beyond telling a compelling story?

"Objective" might be overstating it. Theres no denying that violent stories are compelling. The threat of violence is the easiest way to put your character in jeopardy. But I think there's another reason these stories are so brutal, even if it wasn't a conscious one. Before modern medicine, children were surrounded by death; death in childbirth, death by disease, death from violent mishap. People simply didn't live as long, and you never knew when someone you loved or cared for might die some horrible death. I think these kinds of stories served as a buffer for that. As a safe container for, and point of transition to accepting real death and real violent misfortune.

One interpretation of the classic Beauty and the Beast tale reflects another reality of the time: young girls were often married off to older men of means who were thought to be able to better provide for them. The story was a metaphor for discovering the "prince" inside old men whom these young women (and by young, I mean barely in their teens) might otherwise find less than appealing. The men didn't always turn out to be princes, but regardless, the arrangement was a practical necessity. There were less choices in general for women back then.

Even with the introduction of modern medicine and a greater level of gender equality, adulthood was, and continues to be filled with many difficult and terrible realities. Many of these realities present themselves to us at a very young age, and until very recently, children's stories continued to reflect these realities.

And even in more modern tales for children, like Alice's Adventures in Wonderland... 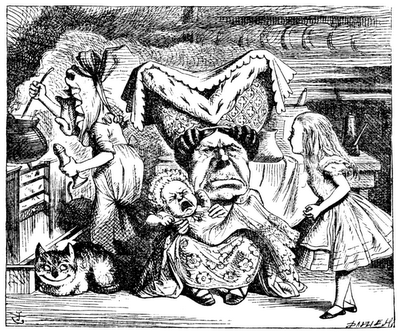 It wasn't always pretty. These ladies want to put that baby in that steaming pot!

Entering the 20th century, children's stories continued to have an edge to them. L. Frank Baum's Wizard of Oz, in many ways, wasn't any less terrifying than The Brother's Grimm. 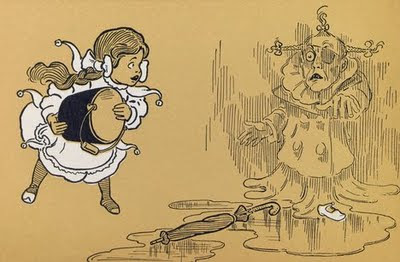 This is one of the original illustrations by W.W. Denslow for The Wonderful Wizard of Oz.

In the late 1800s, Randolph Caldecott wrote and illustrated some of the first true picture books designed for young children. In Caldecott's books, the pictures were as important as the words. It's Caldecott for whom the Caldecott Medal, the award for excellence in children's picture books, was named for. 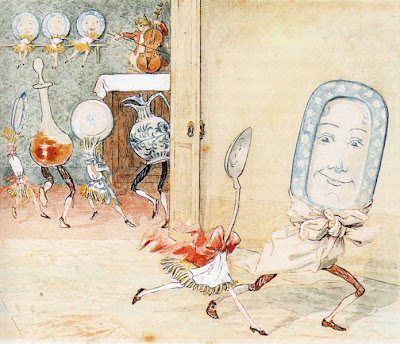 These stories were based primarily on children's nursery rhymes, but at the time, young children were still read the Brothers Grimm, and other folk, and modern tales.

Later in the 20th century a trend towards greater censorship began, with morals groups rallying against what was considered harmful or obscene. The Hays code was introduced to censor film in the 1930s, and in the 1950s Fredric Wertham cracked down on comic books, which were then thought to be the cause of juvenile delinquency. By the late 50s, picture books in particular had taken on an even more saccharine tone. It started with the Dick and Jane books in the 1930s--some of the first books available to young children designed to teach them to read. These books were incredibly bland. The object was first to teach, and to entertain, came a distant, to nonexistent second. 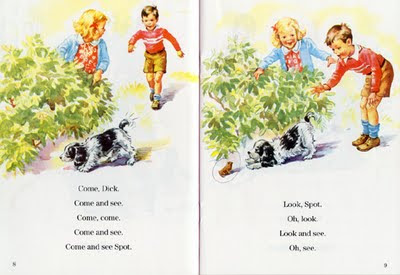 In the 60s, Dr. Seuss was given the task by his publisher to use the same basic vocabulary used in the Dick and Jane books to write a book that was genuinely entertaining. His answer was The Cat in The Hat.

And the Cat in the Hat changed the face of early reader books forever. I remember as a kid in the late 70s still being subjected to Dick and Jane in school, but now these books are long gone.

The Wild Things gnashed their terrible teeth and threatened to eat Max, they loved hims so. For a young child, it's scary stuff, but it's a kind of scary kids need. It's also the kind of book that it would be hard to get published today.

In the nineties, scary started to come back in a big way in the form of middle reader chapter books. 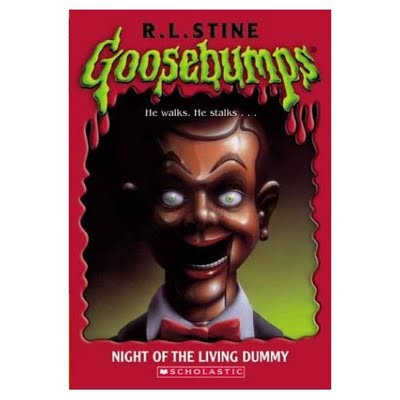 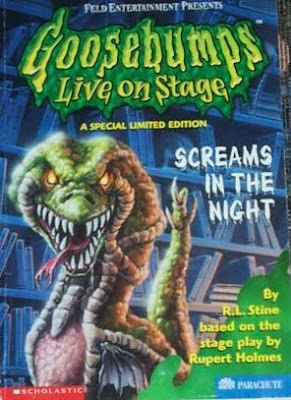 Parents tend to hate the popular Goosebumps series, but kids loved them. I wouldn't call it great literature, but for the first time, preteens had their own Stephen King. What you might not remember is that these books predated Harry Potter by a number of years, and in a way, primed its audience for something a little more sophisticated. And that's when the young adult fantasy revolution began: 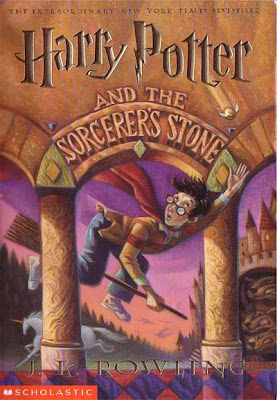 And continues to this day. Right now, young adult books are the only growth market in the publishing industry. Even authors popular in other genres, like John Grisham and Carl Hiaasen, have taken to writing for the young adult market, but fantasy themed books still dominate.

But when it comes to scary, picture books still lag behind. In the eighties, picture books really lost their footing, returning to an earlier era of squeaky clean. 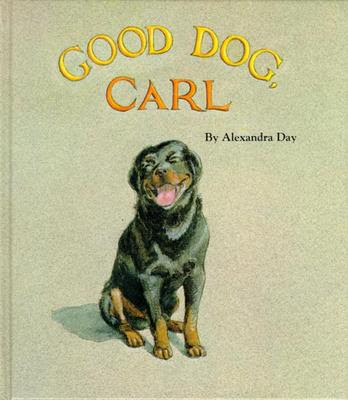 Good Dog Carl epitomizes this trend to me. Harking back to Dick and Jane blandness, it was the kind of book that appealed more to grandparents looking for a good gift for their grandchildren, than actual kids.

Somewhere between a Good Dog Carl and a Harry Potter there needs to be a transition point. You don't need to terrify children, but you do need to give kids a safe container for their nightmares. Kids are more resilient than we give them credit for, but more importantly: kids like scary stories. But they need scary stories that are appropriate for them.

Where scarier material for children has been introduced in recent years, is in animated films like Toy Story 3 and Shrek. Movies like Toy Story 3 aren't written for young children, and have a level of adult sophistication that doesn't accommodate a kids understanding of reality, but adults take their kids to these movies anyway. There seems to be a real disconnect between what kinds of picture books are appropriate for kids, and what kinds of movies are appropriate for kids. It's a disconnect that I don't quite understand--what makes a scary movie "family fare", and a scary picture book "too scary" for kids? So though I do think kids need scary, they need scary that's specifically written for them, and with them in mind. Not in a condescending way, but in a way that truly speaks to them. Publishers need to understand this, and we need to reintroduce scary stories into the picture book market that make sense for contemporary kids. We owe it to them, both as a developmental tool, and so that they will become better readers. Besides, good scary never fails to entertain.
Posted by Jed Alexander at 3:23 AM

Email ThisBlogThis!Share to TwitterShare to FacebookShare to Pinterest
Labels: Baba Yaga, Bob Staake, Brother's Grimm, Dr. Seuss, Goosebumps, Hansel and Gretel, Harry Potter, Jack and the Beanstalk, Lisbeth Zwerger, The Cat in the Hat, Where the Wild Things Are