Another Duck Island Rough, Working With My Favorite Model

Kid poses are getting a little easier. I had some photo ref, but not these specific poses. When you try to get a seven year old to pose, they look very...posed. So I just gave my favorite model some general instructions.

"You're talking to the ducks!"

"You're shaking hands with a duck!"

"You're sneaking up on them!"

"Dancing! No, just silly dancing this time! Not ballet dancing!"

It's as fun as it sounds. And exhausting. It's exhausting just watching a seven year old. I don't know how you parents do it. The photos give me a feel of the general action and the body language of a real kid and I work from there. As a general rule, I age down. The kid's book kid age is usually around 5, but I've found that 5 year olds are even more unruly than 7 year olds, so 7 tends to do the job.

The worst is a reluctant kid. They really have to be into it, or it's a no go! The most frustrating thing in the world is trying to get a reluctant kid to work with you. So the last time I had a kid model I tried to make sure by asking, "are they into it? Because if they're not into the idea, then it's probably not going to work. I'm always grateful to the adults and to the kids of course, but it's better when they want to be there and aren't compelled to be there.

As a reward I give them posters of some of my work (if you'd like a poster of your own, you can get one, here at an economical price), which the kids seem happy with. Awhile back I let my favorite model keep the foam rubber sword and axe I got from Target for a buck each when we were doing pirates, and she seemed to appreciate it.

Always searching for cooperative and enthusiastic kid models in the Davis area. And now that it's summer I also provide popsicles!

I just realized I accidentally reused two ducks in this illustration from the previous image! Those ducks were far in the background, and mostly cropped and will  eventually be re-inked and probably a little redrawn in the finish so it shouldn't matter much, but reusing art always seems like a cheat, so it's something I really try to avoid.

So do you think you can spot the culprits in the previous post? That'll keep you busy on your coffee break... 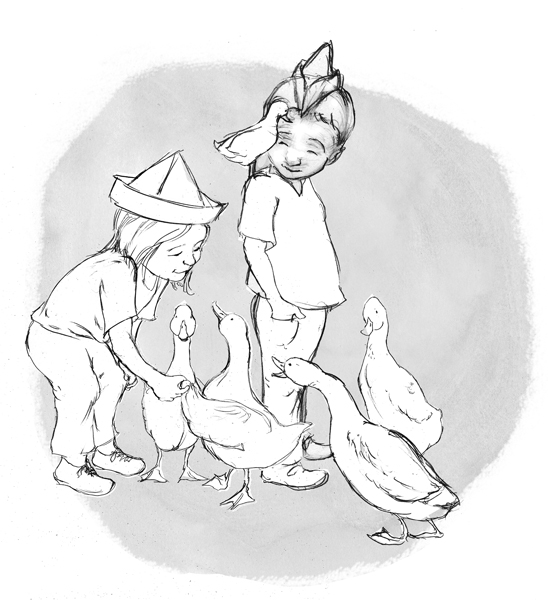 Posted by Jed Alexander at 9:05 AM