Daily Post: Lumpy Guy, Thoughts on the New Walking Dead TV show vs. The Original Dawn of the Dead

Done while watching AMC's new Day of the Dead show. Not really a zombie or particularly related to the show. 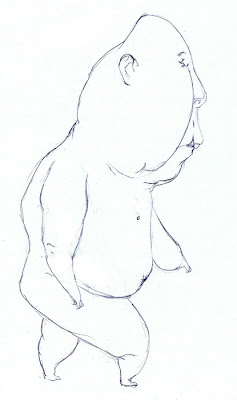 It's interesting how what was essentially George Romero's idea in the sixties became a genre. There's pretty much nothing in the new show, concept-wise that wasn't taken directly from Romero's zombie trilogy--or what is it now? septilogy? I haven't seen any of his new movies after Land of the Dead, which was pretty fun, but I heard his recent efforts weren't so good. Anyway, the Walking Dead is pretty much Night of the Living Dead the TV show, and is quite well done. It looks like it succeeds in being exactly what it sets out to be. At this point, with CGI, zombie apocalypses are no sweat. An arial view with a million shambling zombies in a deserted city? No problem. A zombie with only a torso dragging itself around on the grass? Yuck. No problem. The special effects are completely seamless. The scares are real--Romero could be proud. They definitely know how to build up the tension and suspense.

I read the first few issues of the comic and the TV series seems to be following it pretty closely. I didn't find the comic all that compelling--the characters were mostly archetypes and the concept seemed old hat, but I'm told it gets better as it progresses as the characters become more fleshed out. Comics can't carry the same tension and suspense that you can get in a movie, good actors well directed can make simple characters compelling, so the TV series immediately had more appeal to me.

Reg and I watched the recent Zombie parodies together, Shaun of the Dead and Zombieland--Zombieland was kind of eh, but Shaun of the Dead definitely got it right. So was willing to try this new show. I warned her, it was going to be gross. It was gross. But after all these years of being unable to get reg to watch horror movies, reg loved The Walking Dead. I mean, loved it. She immediately wanted to see everything zombie. She e-mailed me from work the next day with the message, "can we see a zombie movie? Tonight?"

So I ended up getting two the following night, 28 Days Later (I don't care what you say, it's a zombie movie!) and Dawn of the Dead. I thought 28 Days later was a good one to start with since the scares are comparable to The Walking Dead, and it has strong characters.

28 Days later is zombies as an out of control virus, with zombies that run, but basically it's zombies without the word zombies being uttered. In fact, generally in zombie movies, no one says the word zombie, so that's not exactly new. Danny Boyle is a director that I find often disappointing because his movies are so often just on the cusp of being a lot better than they are. 28 Days later unfortunately keeps to this rule, with an ending where bike messenger Cillian Murphy inexplicably turns into a commando-style tactician with what amounts to superpowers. Up till then, the movie was pretty naturalistic, a zombie movie with unusually good writing, strong characters and strong performances, genuinely terrifying. Reg loved it.

So last night was time for Dawn of the Dead, her first Romero zombie movie. I warned her about the campiness. I didn't realize before how recent Dawn of the Dead was when I saw it originally when I was about 10. It came out in 1979, and the film was only about 4 years old when we saw it on our brand new VCR in the early 80s. This was back when we still wore short short bathing suits and the first movie we saw on our VCR was Cheech and Chong's Up in Smoke.

So despite this, I forget sometimes how much the early 80s still resembled the 70s, and Dawn of the Dead is as 70s as horror movies get. At the beginning of the film they're chasing down this gang leader who turns out to be a white guy unconvincingly painted to look Puerto Rican, maybe the last time anything like that was ever done in a wide release mainstream movie. The blood is as bright red as tempera paint. The black guy says stuff like "sucka" and "chump". It all seems quant and innocent now, but when I was 10 it was terrifying. I remember seeing some sort of "making of" afterwards where they showed how they did the scene where the zombie gets half decapitated with a helicopter blade. It turned out to be a very convincing dummy. At the time, knowing how it was done softened it a little for me and probably prevented a few nightmares.

At first Reg wasn't so into it because of the relentlessly cheesy 70sness of it all, but by the time they got to the mall, she was into it. Not too long ago I saw Zack Sneider's remake, which was scarier--he borrowed Danny Boyle's running zombies, and there's the notorious zombie birth scene--but the characters weren't nearly as compelling as Boyle's. Not that they were so convincing in the original. But I still prefer the original. In Sneider's you never got that great image of zombies pushing shopping carts in the mall. I can't see how he could have passed that one up. The original also better captured the whole feel of living in this mall for months, going on shopping sprees and getting obsessed with an abundance of stuff. I mean, that was practically the whole point. In one scene, as one of the characters is defending their mall stronghold from an army of bikers (the biker scene in general is one of the best and campiest in the movie) he says something like, "it's ours. We took it." He's so invested in all that stuff that he loses sight of his own survival. This concept was completely missed in Sneider's film. Dawn of the Dead is first and foremost a zombie movie, not some great comment on consumerism, but this subtext is part of what makes the movie fun. But Sneider is not really strong on subtext.

So now Reg wants us to have our own miniature zombie fest, so I get to introduce her to some of my favorites: Night of the Living Dead of course, Evil Dead 2, Evil Dead 3, Army of Darkness, Land of the Dead, and I still haven't seen Return of the Living Dead. So we'll get to see that one together for the the first time. I don't think she's going to be much into the high camp and gore of Re-Animator--it's no Evil Dead 2. But it'll be fun. Now if only I can talk her into early Cronenberg...

So with three of my favorite shows right now, Mad Men, Rubicon and the very promising Walking Dead, AMC, as far as I'm concerned, is the new HBO. And if you haven't seen Rubicon yet, do. It's a John le Carré style espionage thriller with great characters and great performances. It's not exactly fast-paced, there's no gun play or car chases, but it's smart, and it only gets better as it progresses. AMC also does Breaking Bad, but I found Breaking Bad to be pretty disappointing, the old, I'm-dying-so-I'm-throwing-caution-to-the-wind-and-by-god-I'm-living-for-the-first-time-because-of-it schtick. But the other three--so far so good. I'm started to get sick of Dan Draper screwing everything within arms length in Mad Men, but otherwise, Mad Men has a lot to recommend it as well. Right now the best part about Mad Men isn't the men but the women--Peggy and Joan.
Posted by Jed Alexander at 3:12 AM