Not quite my definitive take on the character, but I still like the drawing. I wanted to make Superman more like a circus strong man, but it didn't quite work out. He's just a little too skinny and looks less stoic, and more chilly. I'm still working on it. I haven't drawn superheroes in a while but was inspired to do this one by Tin Salamunic who recently posted a bunch of his own versions of his childhood heroes, but I have plans to give it another go. 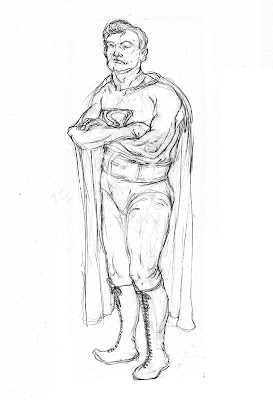 In my version he's got a wrestler's belt and wrestler's boots and his old school late 30s emblem. I also gave him one of those weird 30s pompadours, less greasy and more curly than the 50s pompadour. Back then superhero outfits were a little more high waisted. Superman had a narrow waist and no hips. The whole ensemble was definitely more circus strong man than spandex. The underwear outside of the pants thing was really just a sort of strong man speedo (to show off his muscles) with tights underneath, because I imagine circus tents could get really drafty. It was a look.

Things only got weird in the superhero costume department when costumes derivative of this look had lost sight of their original inspiration. Underpants outside the clothes became the default and no longer made any sense. In the 30s and 40s the look was recognizable. Later it just became the way things were done. No one remembered why. This seems to go for a lot of conventions of the genre.

That's why I'm a fan of the off-brand superheroes of the 40s and 60s (since superheroes had nearly disappeared in the 50s)--they didn't have the genre conventions down quite so pat. These guys still had the underwear outside the pants for no apparent reason, but they didn't read like DC and Marvel comics. I'm talking MLJ superheroes like The Fly and The Hangman (whose superpower was killing people. That was it. He just killed people with his noose), or anything written by Joe Simon in the 60s, like Bee-Man, or my favorite, Jigsaw. Now that one was just weird. He got all torn up when his spaceship crashed and aliens had to piece him back together, but they did it wrong because they didn't know what humans were supposed to look like, so he became a big mess of puzzle pieces and--well it just got grosser from there. It's hard to even describe. 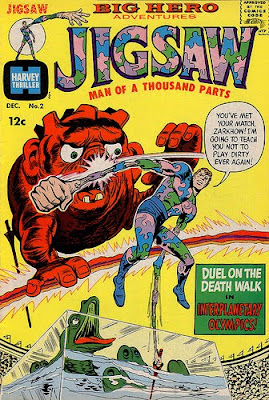 Just try to figure that one out. There's this great scene where he returns from space and scares the shit out of his girlfriend.

T.H.U.N.D.E.R. Agents fits in there somewhere, Solar, Man of the Atom, Brain Boy I'm sure I would dig if I ever read it, 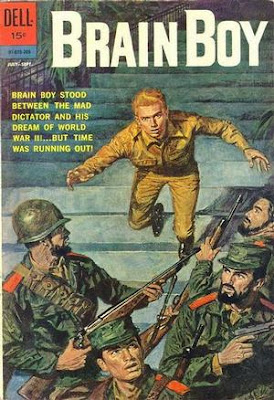 Dell/Gold Key seemed to really make an effort not to make their superheroes typical. This guy not only doesn't wear his underwear outside of his clothes, but he doesn't even have a costume! Solar Man of the Atom was another one that went out of it's way not to look like other superhero comics.

Then there was the original Ditko/Charlton Captain Atom and The Question, who had no face. Or at least a mask that made him look like he had no face. Very creepy. Now that would strike fear into the hearts of evil doers way more than a guy dressed as a bat. 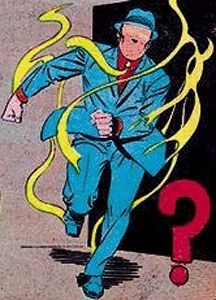 Think of how much more effective that would be? Wouldn't that completely freak you out? They've revived The Question and others more recently, but they're just not quite the same.

And from the 40s, The Red Bee, who had two pet bees in his belt, or Madam Fatal, who was literally just a guy in old lady drag. 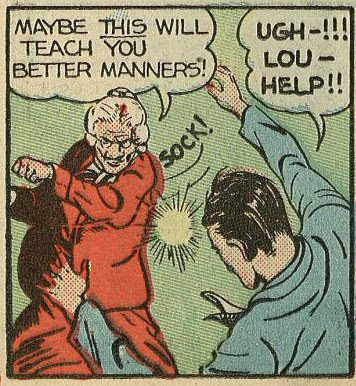 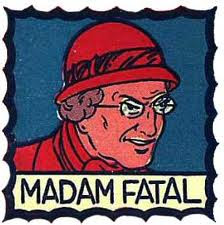 You can't make this stuff up. Well, someone can I guess. Did I mention Tiger Boy? See Tom Neely's even better version here. 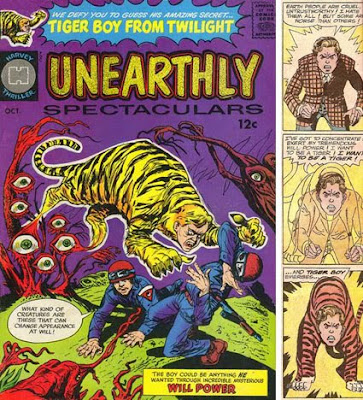 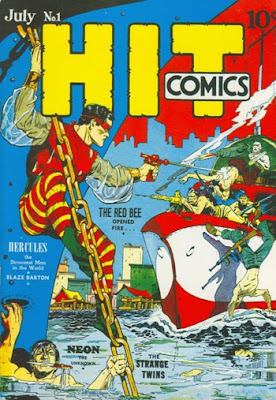 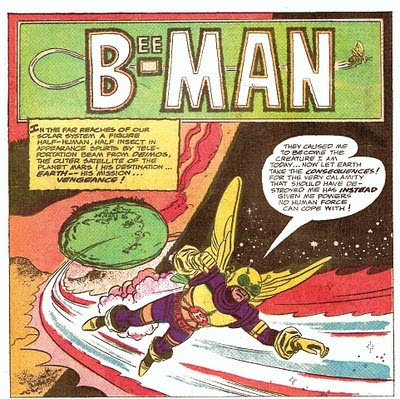 Check out the blousey sleeves on The Red Bee.

It looks like I have three entries here from Joe Simon's brief but memorable Harvey run (Jigsaw, Tiger Boy, Bee-Man). His cluelessness about genre conventions was so eccentric his comics have a way of almost making me nauseous. I find them fascinating but at the same time, hard to look at.

Spider-Man was really the only insect-themed superhero that ever came across as cool. Check out The Tarantula: 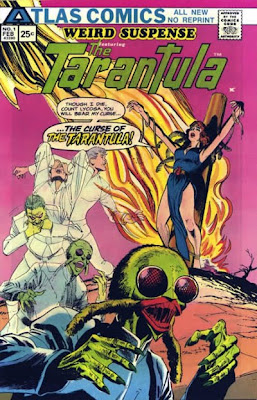 Now that's just eww. The tarantula is from the 70s and is more of a late entry into the whole what-were-they-thinking era of superheroes. Between Jigsaw and this guy I'd just assume let the bad guys get me.

In the 80s things took a turn for the weird again, with some trippy stuff from Neil Adams who was famous for his run on Batman before he did his own thing with stuff like Toy Boy and The Revengers, and best of all, Skate Man: 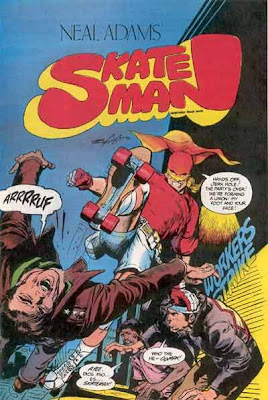 I knew it was kind of dorky at the time, but I loved Skate Man! If you can't read the word balloons, Skateman says, "Hands Off Jerkhole, the parties over! We're forming a union! My foot and your face!" To which one of the thugs responds, "Ayee. Dios... mio...Skateman!"

It was clear that Neil was almost as clueless as Joe Simon when it came to superhero comics. "The Revengers" sounds like "The Avengers" but isn't quite the same. Revenging just isn't the same as avenging. 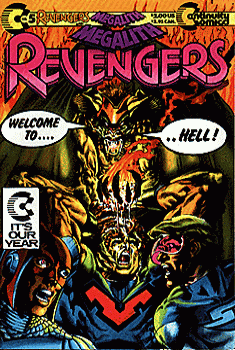 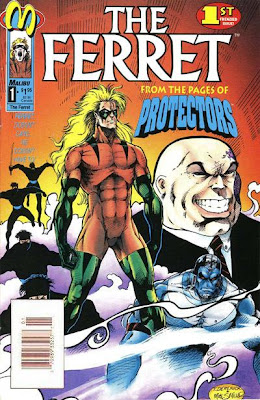 But wait, they ripped off the whole ferret thing from this guy: 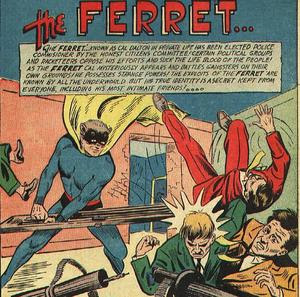 But without the enormous mullet, what's the point? The mullet makes the ferret.

Edit: apparently the 90s Ferret was a revival of the 40s Ferret. Who knew? Also, you'd think if he had a secret identity people would recognize him right away. "Who is...the Ferret? Could it be that guy with the enormous mullet? nah..."

Superheroes apparently aren't allowed to be this fun anymore. They're too busy being "realistic". For me, this is even weirder than The Tarantula. What happened? I guess, Watchmen happened, and The Dark Knight (these were comic books before they were movies). Like underpants on the outside of your tights, there seems to be no going back.
Posted by Jed Alexander at 3:00 AM