Daily Post: The Fly. A Superhero. A Drawing. A Brief History.

This is my take on another second string, off-brand superhero, and a favorite of my childhood, The Fly. 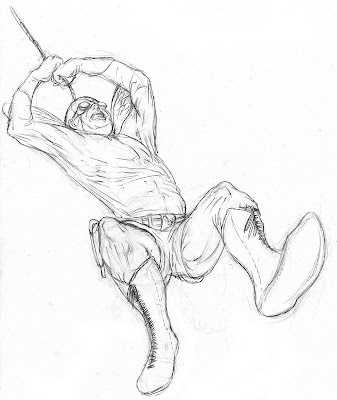 Not to be confused with this guy: 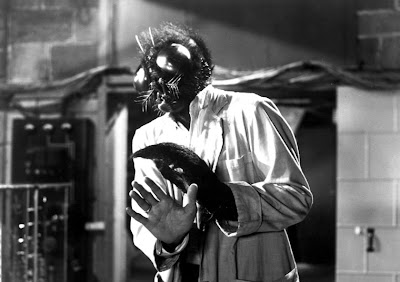 This figure is a part of a larger scene I'm working on, a recreation of a cover from the 50s comic. It's a sort of side project to my side projects. Hopefully I'll knock this out and get back to business, but this superhero thing has distracted me a little.

I can't really explain my enduring affection for the character. The costume is just so appealingly schlubby, with the goggles and the dorky fly wings on his collar. With no apparent rhyme or reason, sometimes his ears would be pink, and sometimes they would be painted yellow. Maybe it was my attraction to underdogs in general. By the time he came around to me he was in his third incarnation in the 80s, and was hopelessly dated. The original character was created by Simon and Kirby and was pretty dorky even then as superheroes go: 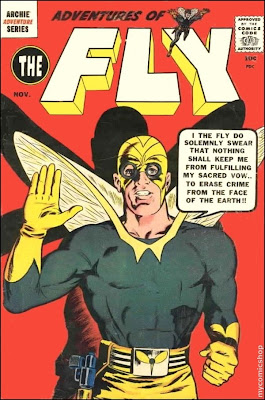 The Fly was revived again in the 60s by Joe Shuster (co-creator of Superman, by now thoroughly alienated from the company that he made rich) and Paul Reinman. Their version was a campy answer to the then popular campy Batman TV show. They changed the name to Fly-Man, to mimic the then popular Spider-Man. 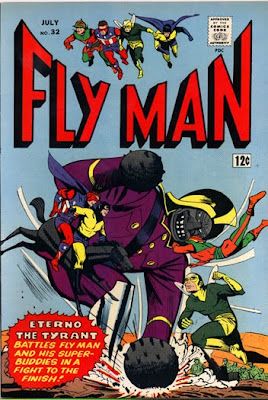 Neither of these series lasted very long.

Believe it or not, Marvel and DC comics actually own the copyright to the word "superhero". So Shuster called his characters, "ultraheroes". You would think that this was an obviously bad idea, but in the 90s there was a whole line of comics that borrowed the name: 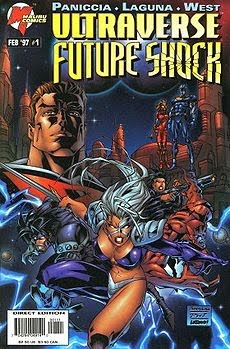 You see, the "ultraheroes" came from the "ultraverse". Doesn't that make perfect sense? I guess they were hoping this whole "ultrahero" thing would catch on and replace "superhero" in the popular vernacular, but alas, it was not to be.

So this is what The Fly looked like when I was reading him: 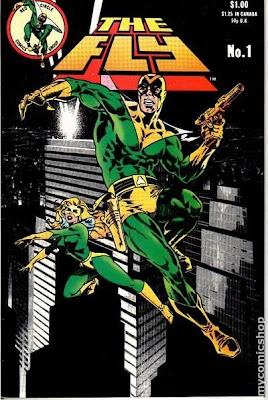 That photo background was something they did that must have looked really cool in the late 60s and early 70s but by the 80s had gone out of vogue. The cover is by Steranko, a big name back in the late 60s, but by then no one knew who he was. This was what they used to call a "direct sales" book, meaning: it only went to comic book stores, so while other comics were 60 and 75 cents, this one was a whopping $1. These books were meant to appeal to the diehard fans. I'm sure the publishers thought they were really on to something. By the end of the run it was a newsstand title that you could get in the grocery store for the more reasonable price of 75 cents, but that didn't really help.

At the time it was written and drawn by a number of hands, with at least a good eight issue run written, drawn and inked by Steve Ditko. Ditko coincidentally co-created Spider-Man whom The Fly predates by a couple of years, and this was probably Ditko's last mainstream comic for which he still did everything. After that it seemed like he had washed his hands of them and the most you would see from Ditko were a few scribbled layouts that other artists would finish. I'm sure the publishers thought this was a perfect fit despite the fact that Ditko's approach to comics by then was about 20 years out of date. After doing The Fly Ditko returned to his single-minded obsession with Ayn Rand, self-publishing a series of endless objectivism inspired screeds in comic book form. His run on The Fly contained some none-to-subtle Randian propaganda that, though obvious to me now, went right over my head as a kid. Apparently nothing about Ditko was appealing to any kid but me at the time.

But they just couldn't leave it alone. 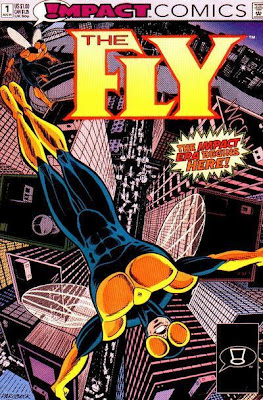 Check out the new costume! Though more modern, it still somehow manages to retain the dorkiness of the original. This one lasted about a year or two in the 90s. It was an attempt to target younger readers, because, while the the same guys who were reading superhero comics in the 80s were still hanging on, the publishers weren't getting any new blood. Needless to say, it didn't work. Japanese manga was already starting to dominate the middle-reader/young adult market and the still superhero obsessed adults were marketed to even more aggressively to try to compensate for the reduced audience. Can't get new blood? Just get the same old audience to buy even more comics. This is their strategy to this day. The average superhero comic reader has got to be at least in their 30s by now. Apparently they have plans to bring The Fly back yet again. This character was never popular. Ever. It really makes no sense at all why they keep bringing him back.

I have to admit my take on The Fly is inspired by Rafael Grampá, or as my friend Dan calls him, Sexy Grandpa. 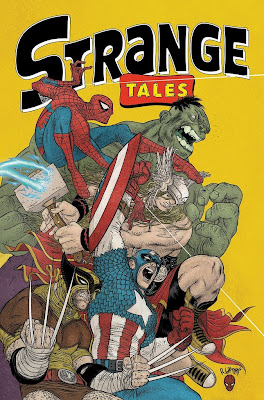 Pretty much every take on a superhero here by Grampá I'm in love with. As far as I'm concerned, this is how superheroes should be drawn. I love the way their clothes don't fit quite right. I love Spider-Man's ballet pointed toes. How Thor looks like he's wearing these half wresting boot, half athletic shoe things. How a little bit of neck shows through Wolverine's mask. So yeah, I pretty much stole everything. I love this guy.

Since the readership for superhero comics is more conservative than ever, unfortunately Grampá's take is still an eccentric one. Strange Tales is a novelty featuring artists popular for drawing non-superhero comics. It only runs for a handful of issues.

Check back in the next week or so for the entire scene! Actually, keep checking. I'm Still for the most part posting new stuff every day!
Posted by Jed Alexander at 5:09 AM